And just like that, summer is over.  :(  There's so much to look forward to in the fall/winter months - Pumpkin Fest 2013, Starbucks pumpkin spice lattes (which are already back!), MM fall and holiday 2013 exhibitions, my b-day (ha!), and the holiday season, but I'm still going to the miss the hell out of these long summer days, as I do every year.  Anyway, here are this week's links.

- I'm making this the first entry for this Curator's Corner because I am so freakin' excited I can hardly stand it.  Murakami is teaming up with Shu Uemura for a spectacular holiday collection!!  You might recall that last December I remarked how cool it would be to have a Murakami makeup collection, so I'm stoked it's coming to fruition.  Rouge Deluxe has the full scoop - you can see official photos here and pics from the grand press event here.

- Oooh, Paul & Joe is coming out with a bath and body line.  It's beautifully packaged, of course.  And we got a sneak peek of their cat-tastic holiday collection.

- But this is way worse.  Facebook-themed nail polish?  No.  Just no.

- On a positive note, let's hear it for Obsessive-Compulsive Cosmetics, whose ad for their fall collection features a guy in full makeup - a rarity in beauty advertising. Granted it's totally theatrical, but it's good to see nevertheless.

- '90s revival lipsticks are definitely something I can get behind.

- Late to the party but I almost died laughing at this Benefit video for their They're Real! mascara.  Bonus:  it has Vinny from Jersey Shore.  Well played, Benefit, well played.

- The 7th annual Elements Showcase just wrapped up.  This perfume expo features outstandingly gorgeous bottles from around the world.

- Apparently the average woman wastes about $8,000 on the wrong shades of makeup during her lifetime.  Such a shame!  But perhaps being a beauty addict who has a ton of makeup evens out - I may buy more than the average woman, but I almost always pick the correct shade. (via Beauty High)

- Via a comment at this XO Jane article on social media, I found a truly fascinating piece from 2011 on "Generation Catalano", i.e. people who don't neatly fall under Gen X but who can't accurately be described as Milennials either, like me.

- In more '90s nostalgia, now that I've fully caught up on almost all the sketch comedies (Mr. Show, The State, Upright Citizens Brigade; still need to check out Kids in the Hall) I've moved on to the great animated series of the decade - currently alternating between Ren & Stimpy (love the Log commercials!) and Dr. Katz.

- If you follow me on Twitter you know I've been training for my first marathon.  Stupid Under Armor has abandoned the Baltimore Running Festival  for sponsorship and while there's been no chatter about canceling the race, I'm still a little wary.

- Still anxiously awaiting the Uglydoll beauty line, but in the meantime I've been admiring these adorable prints by Thumbtack Press.  I think this one is my favorite: 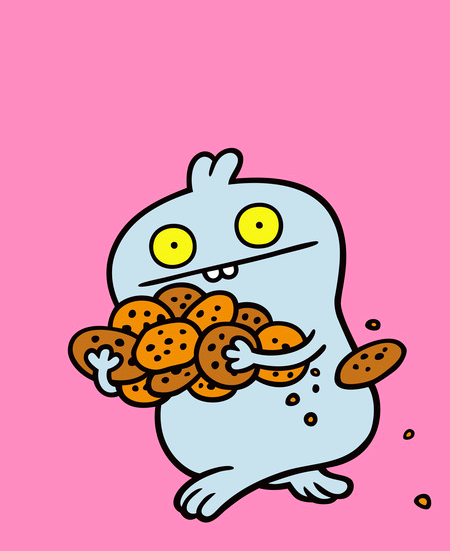 What caught your eye this week?  Are you looking forward to fall?