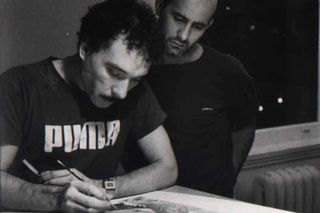 Lopez at work while Juan Ramos looks on (image from latinoaids.org)

Like the stars of previous cosmetics collaborations (Warhol, Basquiat), the work of fashion illustrator Antonio Lopez (1943-1987) has been particularly popular of late. With an exhibition at SCAD this summer, along with a beautifully detailed monograph and accompanying exhibition last year, Lopez's art is enjoying a robust resurgence.  The MAC collaboration honors this extremely influential artist and uses images that represent perhaps his best-known style from the early '80s for the packaging.

Born in Puerto Rico in 1943 and raised in Harlem, Lopez attended the Fashion Institute of Technology and landed a short-lived job at Women's Wear Daily in 1962.  Within a year he left to become a freelance illustrator, and by 1965 he was earning $1,000 per illustration.  Lopez spent most of the 1970s in Paris, where he befriended the likes of Karl Lagerfeld and Yves Saint Laurent.   In the early '80s he returned to New York, continuing his work for magazines like Vogue, Harper's Bazaar, Interview and Vanity.  (You can read a brief bio here.) 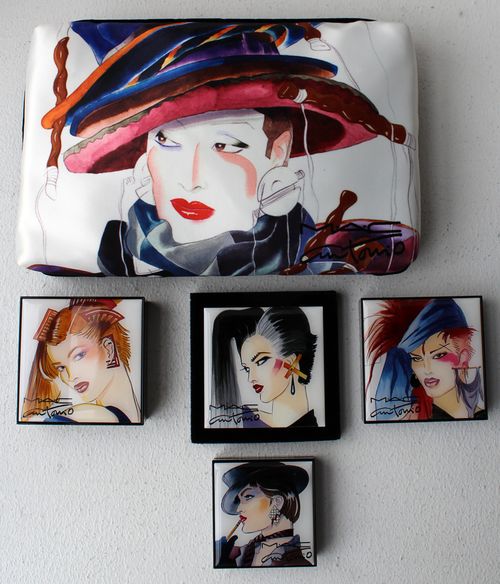 I picked up one of the eye shadow palettes: 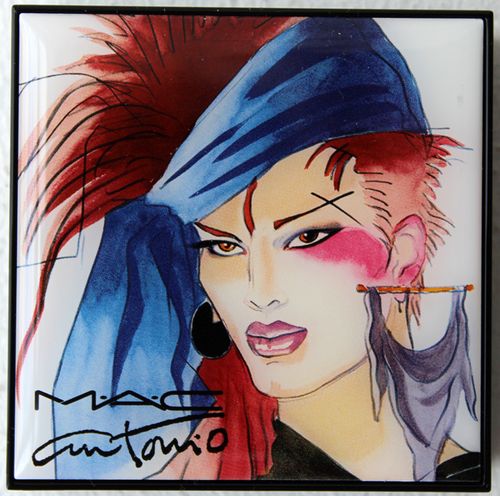 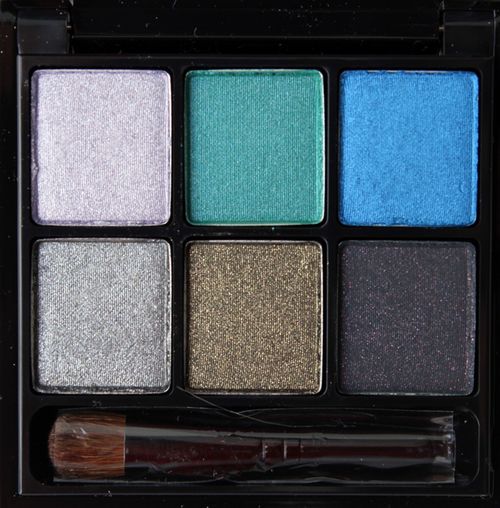 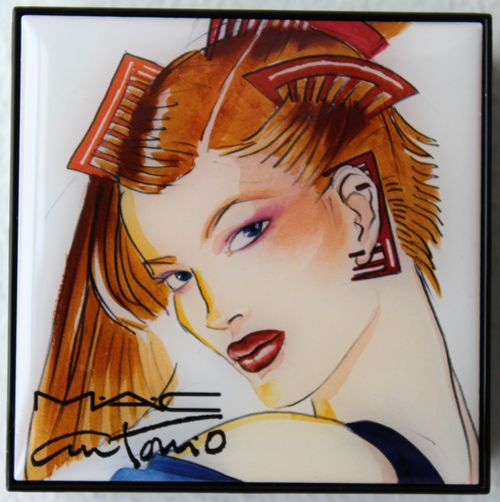 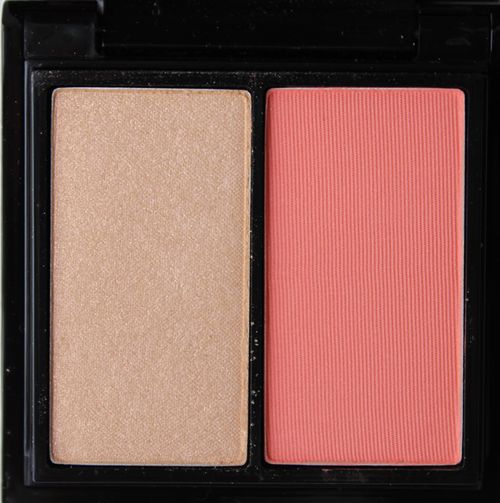 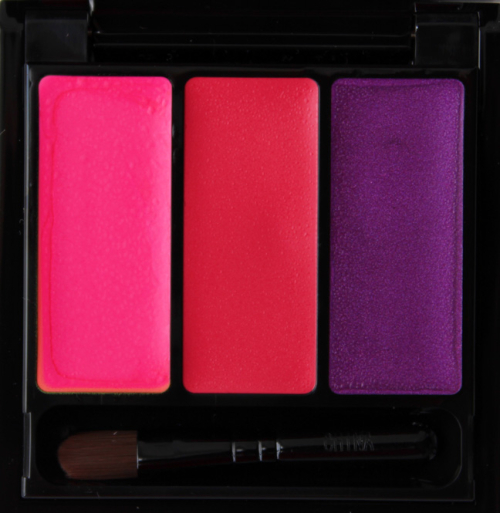 And the makeup bag - I love the velvet backing: 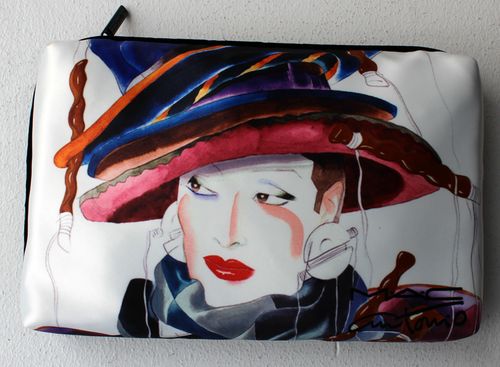 The image is a 1983 portrait of Maria Snyder: 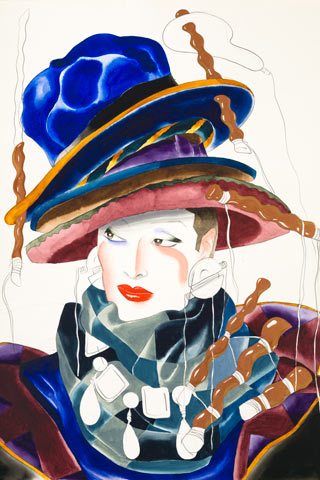 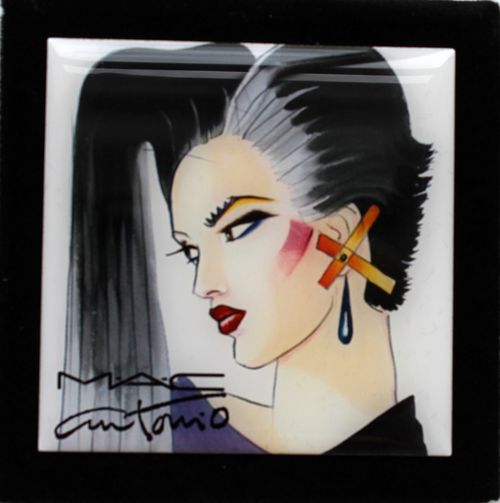 I'm not sure who the model is, but here's the original image: 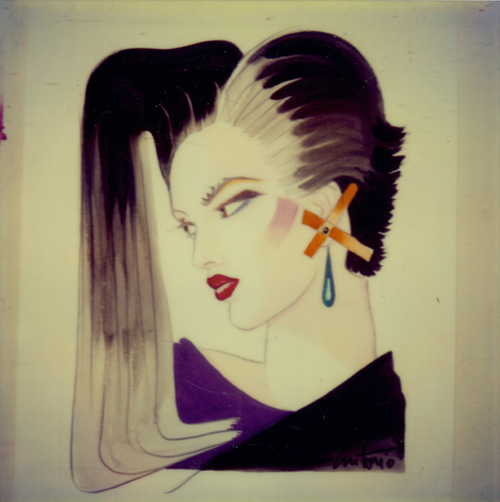 Let's take a look at Lopez's work and how it captured the essence of the heady times in which he lived.

Some psychedelic work for Intro Magazine, 1967: 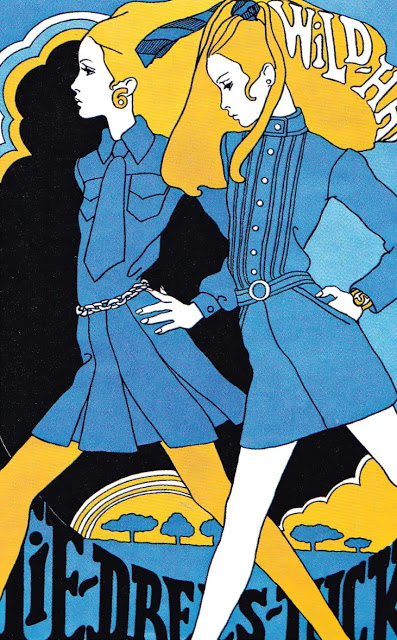 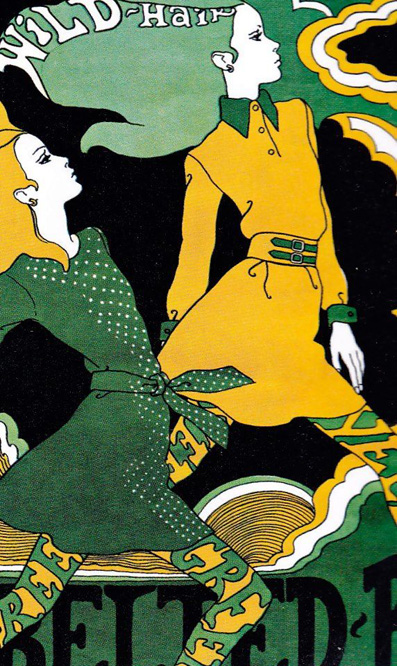 A similar style for Elle Magazine, May 1967: 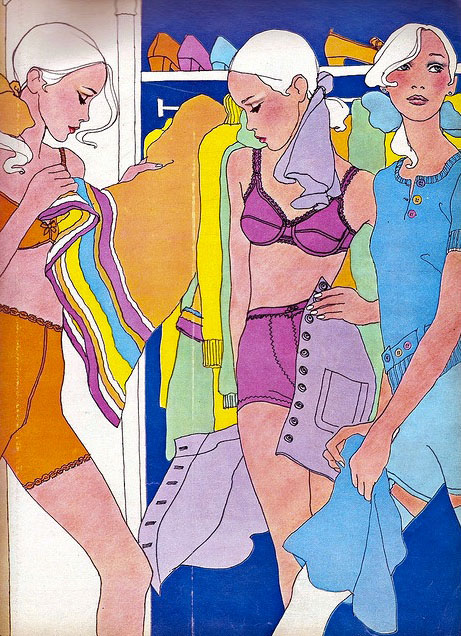 In 1970, we can see his style changing with the dawn of a new decade. 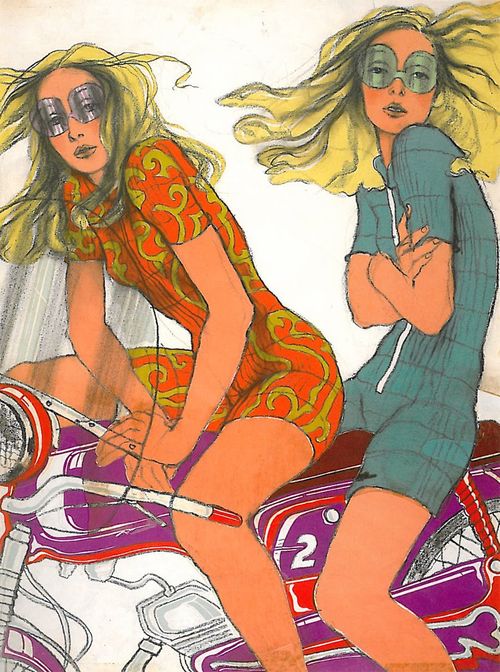 As early as 1972, we can see a bolder, more graphic style that serves as the foundation for some of his most notable illustrations in the '80s. 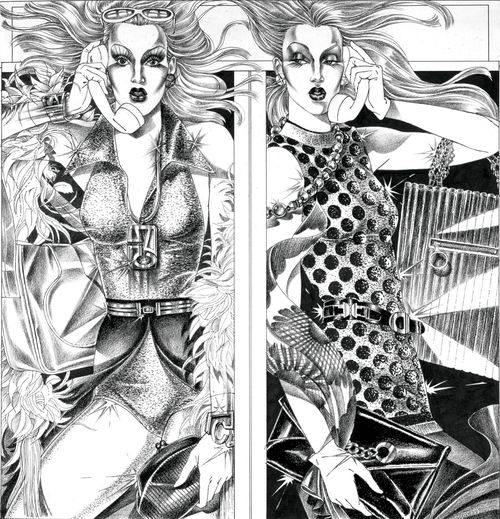 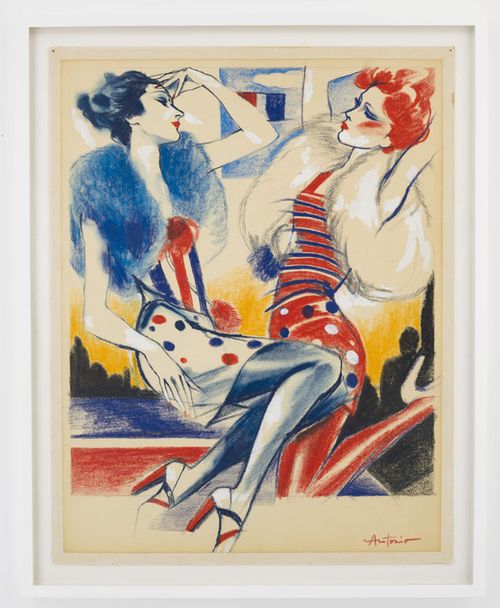 An illustration of Brigitte Bardot for Interview magazine, 1975: 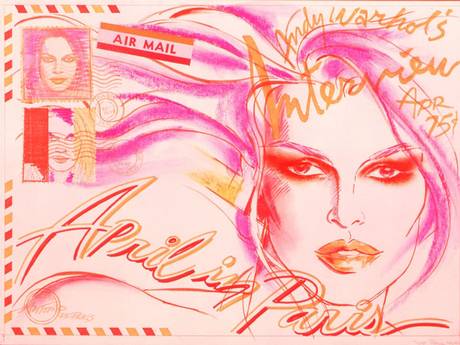 The following images most closely resemble those on the MAC products. 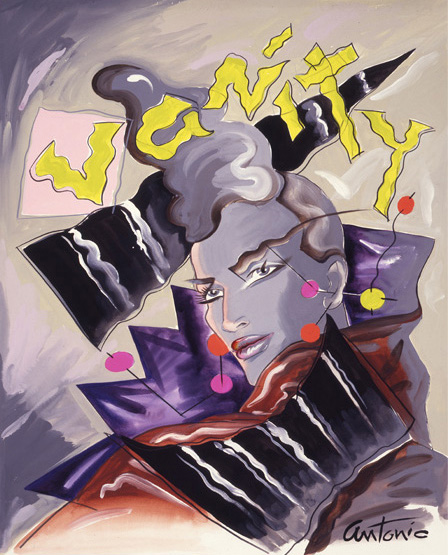 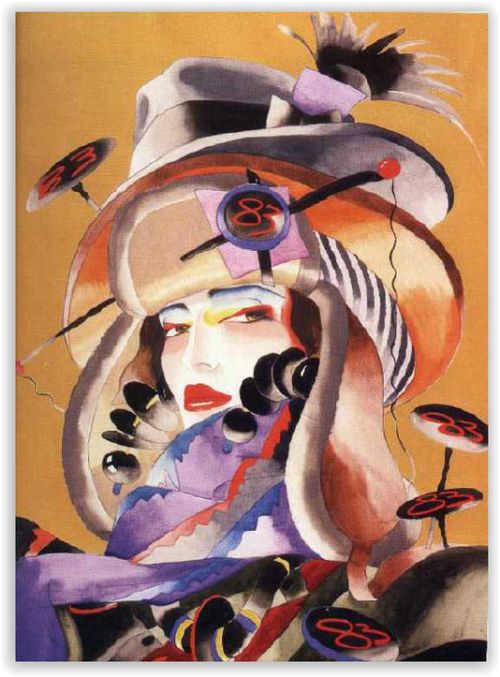 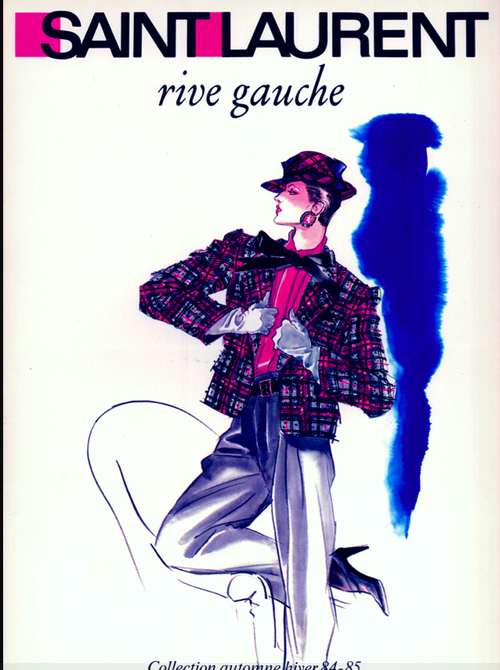 So what made Lopez stand out from other fashion illustrators?  For one, in the early '60s most fashion illustrations resembled very basic, catalog-like depictions of clothing.  Lopez galvanized the medium, infusing representations of designer garments with an energy and movement they previously lacked.  Secondly, Lopez understood how to both capture and evoke a particular era.  André Leon Talley, Vogue editor and a former colleague of Lopez, remarks that Lopez "knew how to suggest the mood of the time."  Adds East of Mayfair Director Janina Joffe, "The greatest fashion artists create desirable images that capture the entire spirit of an era and still remain timeless. Antonio Lopez was a definitive master of this skill."

Finally, Lopez's work disguinshes itself from from that of other illustrators in that it heavily influenced the designers - they took their cue from his work rather than the other way around.  In an interview with Harper's Bazaar, Mauricio Padilha, one of the authors of Antonio Lopez:  Fashion, Art, Sex & Disco, had this to say:  "Some of the models, he wouldn’t even put clothing on them. He would have the model standing next to the clothing in a leotard or whatever and he would illustrate how he saw the clothing onto the model’s body. It became something different and a lot of times designers would go back and then rework their outfits so it looked more like his illustrations."  Indeed, Lopez's influence is still rippling through the psyche of various designers today.  "[A] fresh crop of fashion designers, stylists and photographers seem to have been thumbing through Antonio's back-catalogue – the December 2012 issue of Vogue Italia featured a Steven Meisel covershoot titled 'High Gloss' that paid homage to the heady world of hedonism captured in Lopez's polaroids, eye-obscuring Jerry Hall mane and all. The same imagery – and that lop-sided hairdo – roamed Jonathan Saunders' spring catwalk in London...Antonio, of course, wasn't only about girls – his eroticised drawings of male models populated campaigns for Versace and Missoni in the eighties.  Those exaggerated images – man as hunter-gatherer in buttery-leather and luxury knits, respectively – were fodder for Kim Jones' sophomore menswear collection for Louis Vuitton, where the emphatic shoulders, artfully wrapped capes and chiselled jawlines whispered of Antonio heroes past.  Their feminine counterparts, the sketches of Jerry, Pat et al, inspired the disco diva bugle-beaded gowns of New York designer Jason Wu's 2013 pre-Fall collection, translating Antonio's pen marks into cashmere and chiffon," writes Alexander Fury at The Independent.

Getting back to the MAC collaboration, MAC Creative Director James Gager states that it was Lopez's "tremendous zest for living" that was the catalyst for the collection.  He adds, “When you see the pictures and the drawings, you want to re-meet these people at a party or on the street. You want to stop them and say, 'You look incredible!'”  I suppose if any company is going to launch a collection inspired by Lopez's hedonistic vibe expressed in bold colors and strong lines, MAC is appropriate.  However, I would have liked if they could have indicated which models were in the illustrations that appeared on the packaging.  The promo ad reunites three of "Antonio's Girls" (Jerry Hall, Pat Cleveland and Marisa Berenson), but it's unclear if any of them are in the illustrations that were selected.  Plus, I stumbled across this image and thought it would have been perfect for a makeup collection: 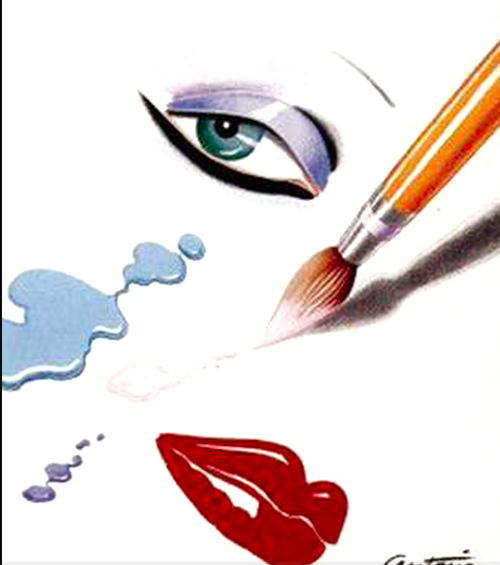 Anyway, I prefer Lopez's earlier work of the late '60s to the flashier designs he created in the late  '70s and '80s.  The colors appear garish and incongruous, the lines harsh and severe.  Of course, it could just be that I simply don't care for '80s fashion, and Lopez amplified the excess of the decade.  If I find the '80s aesthetic to be unappealing, Lopez's work certainly heightened it (i.e., made it seem uglier than it actually was.)  Conversely, if you love '80s fashion then Lopez's work sublimely elevates it.

What do you think, both of Lopez as an illustrator and of the MAC collection?