I saw this last week at Musings of a Muse and thought it was the cutest thing ever!   No one does kitsch quite like Benefit.  The company will be rolling out 25 pink bus-shaped kiosks to be placed at major airport terminals across the U.S., with a few already in place now at JFK, Austin and Las Vegas airports.  According to Allure Magazine, they'll be "stocked with the brand's 30 best-selling products—including Benefit They're Real! Mascara and Benefit The PoreFessional Primer.   The display screen gives users detailed product descriptions, beauty tips, tricks for application, and even lets you watch short videos before you buy. (This one features one of our favorite post-flight picks for a pearly glow after that drying airplane air, Benefit Watt's Up! Soft Focus Highlighter." 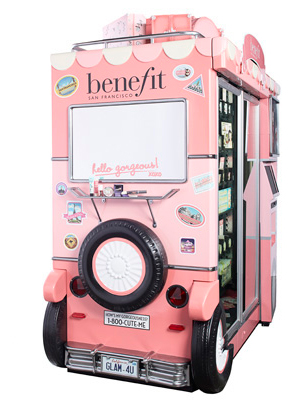 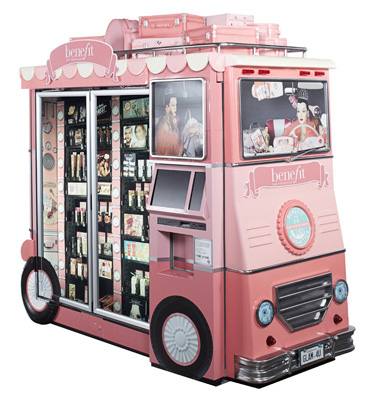 (You can see an in-person picture here.)  Of course, this isn't an entirely new concept.   Stila led the way back in 2002, when the company placed a vending machine in Bloomingdale's in NYC.  By 2007 a few more cosmetics companies, including Elizabeth Arden, were unveiling self-serve kiosks in malls.  In 2009, Sephora put vending machines in JC Penney's stores that were too small to have a full Sephora store within, and also put the kiosks in several major airports. 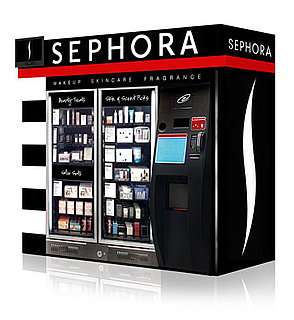 More recently, in May Chanel introduced a temporary vending machine dedicated to selling one item - a new volumizing mascara - at Selfridge's in the UK.   This was a novel idea in that the vending machine was used not to sell a variety of the company's top items but rather to grant exclusive access to a new product before it was officially rolled out at counters.  And because it's Chanel, buyers required a special coin emblazoned with the famous interlocking Cs to access the machine. Other companies, including The Body Shop, Neutrogena, Proactive and Utique are following suit and have either just launched their own kiosks or are doing so in the near future.  So while the idea having vending machines for cosmetics isn't groundbreaking, the design of Benefit's particular kiosks are.  But would we expect anything less from this brand?  As Benefit marketing director Julie Bell says, "It’s wow on wheels!  It’s sexy, fun and an innovative new way to introduce our instant beauty solutions and 'laughter is the best cosmetic' brand motto to hundreds of millions of travelers that fly each year."  I'm inclined to agree - how could you not smile when faced with a retro Pepto-pink bus-shaped kiosk that sells some great products?

Have you seen the Benefit vending machines in person yet?  I haven't, and now I want to take a trip somewhere just so I can experience the novelty of buying something from that adorable little bus.