“Graffiti has taught me so much to not only put myself out there even if what I do is not perfect but most importantly I learned how to be fearless and just go for it.” – Indie 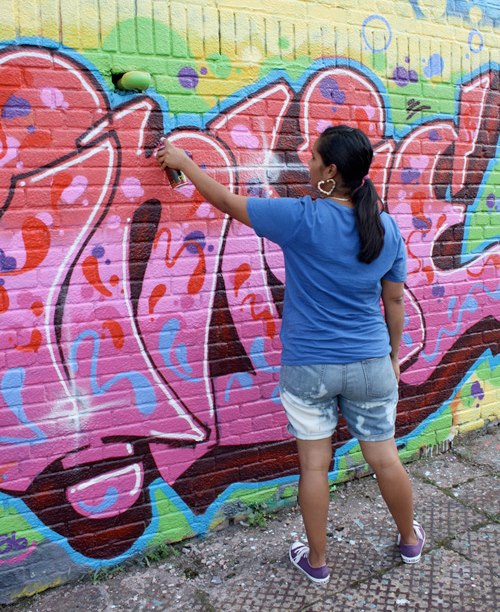 The second part of MAC's 2013 Illustrated collection features the work of graffiti artist Indie 184.  Born in Puerto Rico to Dominican parents and raised in New York, her style combines vivid colors with a contemporary take on old-school New York City graffiti.  Her indomitable spirit is fittingly expressed in her tag, a riff on the movie adventurer Indiana Jones, while 184 comes from the street she grew up on in Washington Heights. 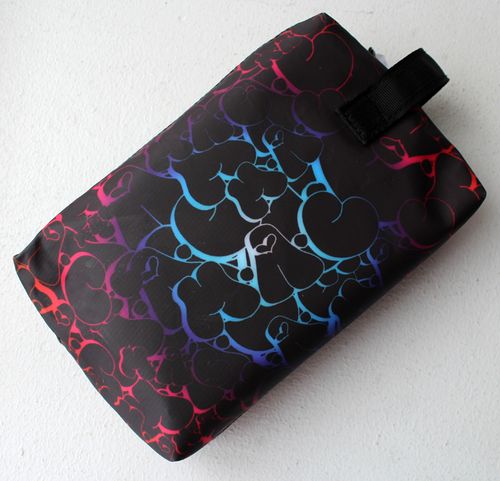 The interior (which is the same design as the exterior of the other bag in the collection): 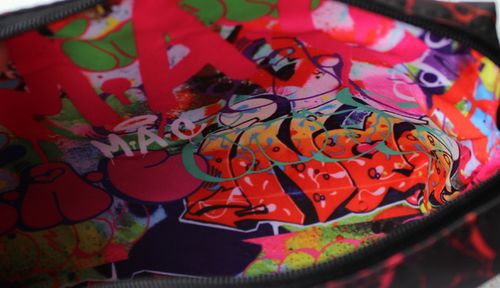 The design on the exterior is similar to the one that appears on a subway map she created for online gallery Etch-A-Sketch.net. 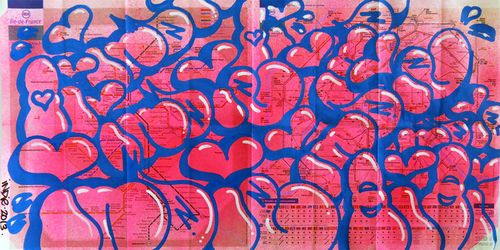 Or one of her many tags throughout New York: 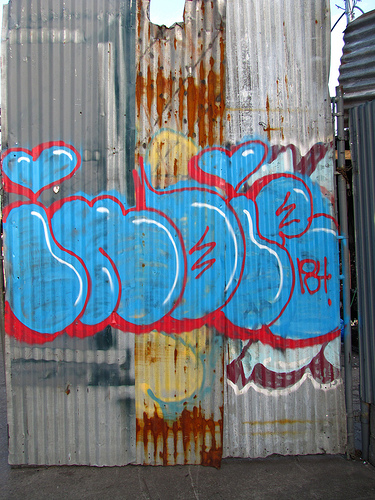 The second bag is more similar to her latest work on canvas.  As she is an admirer of Basquiat and cites him as an inspiration, I can't help but wonder whether the halo and crown shapes are paying homage to him. 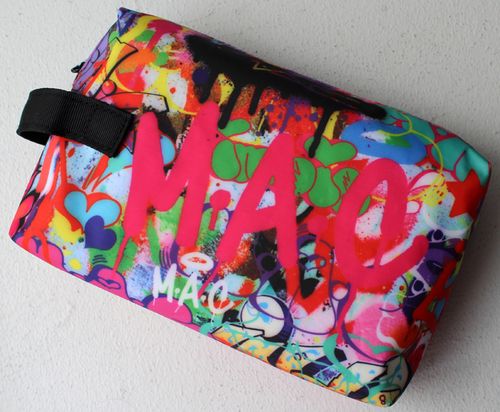 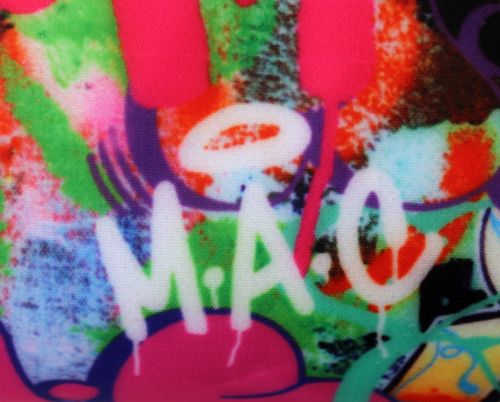 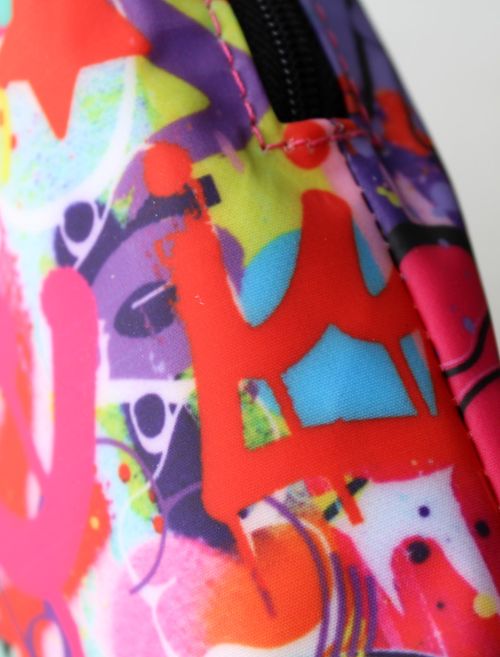 While I appreciate the "bubble" graffiti approach, my love of color means that I'm most captivated by Indie's bright, multi-hued paintings.  She seamlessly translates her style from walls to canvas, weaving together images of famous women and phrases that convey their power.  In her artist's statement, she writes, "My creative process usually starts by pouring out conflicting ideas or emotions using words, images and color. When I create a painting, it’s like a page of my personal diary – all the pieces are worlds of personal declarations. Constant use of word play, found scraps of paper, stencil, graffiti, graphics and photographs mixed with vivid colors...I use iconic female imagery provoking mood and expression embellished with dripping paint juxtaposed with words...The composed painting reflects power, motivation and with an undeniable twist of feminism in my paintings."  The feminist angle, I believe, comes partially from her struggle to be fully accepted as a genuine graffiti artist in a male-dominated environment.  She says in an interview, "[A]s I got more into the culture, I learned that NYC in the 80’s produced few active girls in graf.  So any new girl in the scene would stand out. But of course, that did not mean free rides. I had to push harder to get down on walls. Most male writers don’t take females writers, especially new ones, seriously.  I did not want to stand out only because I was a female writer. I wanted to make my mark and represent for myself. Even now, on occasions, when I’m painting in the streets, some guy comes along and acts surprised when he sees me working with spray paint."

The titles for some of these paintings - Powerful Creation, Call the Shots, Fearless, Knock 'em Out and Own Your Power, combined with Indie's signature hearts and stars - further drive home the idea of feminine strength.  Some of her work is also a tribute to Latina women and a demonstration of allegiance to her cultural heritage, as she references figures such as Frieda Kahlo, Jennifer Lopez and Marquita Rivera.

Call the Shots, 2012 (I love the nod to Warhol represented by the soup cans): 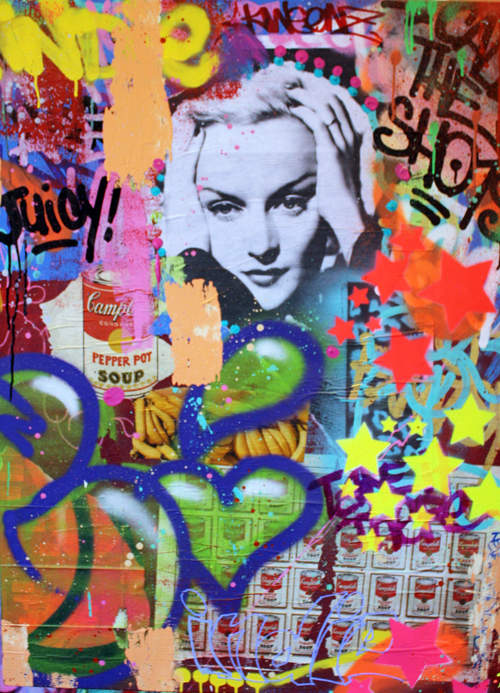 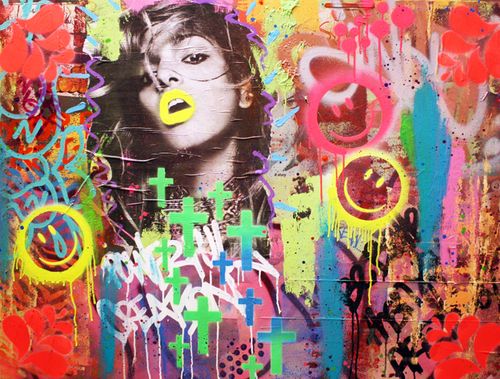 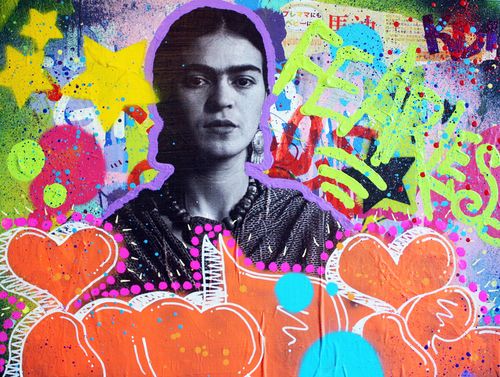 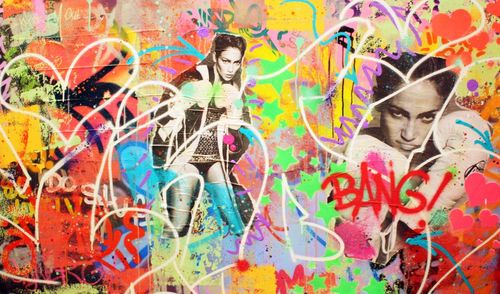 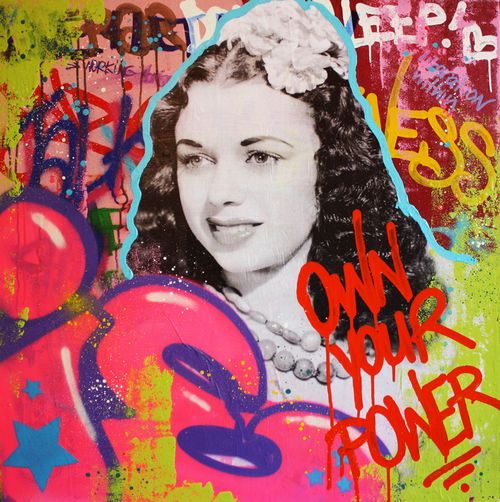 Looking at the dizzying array of flashy colors, it's no surprise to find that Indie's heroines include Jem and Rainbow Brite.  I also find her work to be a true expression of her outspoken, feisty personality and thoroughly unselfconscious attitude.  In an interview regarding her recently launched clothing line named Kweenz Destroy, she states, "Kweenz Destroy is for ladies who hold their own and make an impact with what they do. They love to get their hands dirty and don’t give a shit what people have to say...I don’t feel like I have anything to prove to anyone...I am fulfilling my own desires, not living other people’s ideal of what a graffiti writer should be, because at the end of the day people are going to talk shit regardless."

Overall, I like Indie's work - it's brash, highly personal and has an exuberance and freshness to it while remaining forceful.  And I was pleased to see she's left-handed, given my fascination with southpaws.

What do you think?  Do you like Indie 184's work more than that of Fafi (a graffiti artist that previously collaborated with MAC)?