"To me, reality lies in the world of ambiguity.  In between the innocent, beautiful dream world and the physical world.  That is what I want to express in my collection."  - OB

Shu Uemura has once again selected a very captivating artist to collaborate with on a second spring 2013 collection.  Known simply as OB, this young lady (born in 1992 - I feel so ancient!) attended the Kyoto City Dohda Senior High School of Arts.  Almost immediately after graduating she was signed to the prestigious gallery Kaikai Kiki.  This gallery represents such notable artists as Takashi Murakami and Anselm Reyle (who you might remember from a Dior collaboration in early 2012).  Murakami also serves as her mentor.

In honor of the collaboration, OB and Shu held an exclusive exhibition entitled "Heavenly Creatures" from March 21 through April 17 at the Kaikai Kiki gallery.  From Art in Asia:  "Centered around 'Four Princesses,' a motif born from her collaboration with the cosmetic brand shu uemura, the paintings feature a new range of characters, emotions, and vivid colors that evidence ob’s growth as an artist over the past two years.  Emerging now from her tightly closed inner world, her narratives and images unfold freely and are imbued with youthful energy.  The artist describes the collaboration and her new work as follows:  'They are ordinary girls but after using the Shu Uemura cleansing oil before going to sleep, they become princesses in their dreams and each must fulfill their own task.  Whether summoning flower petals through dance or battling ominouse storms, the princesses pray for the tranquility of our beautiful world. At the same time, however, they are still young girls who use makeup on occasion and become absorbed in their own flights of fancy. I hope people will find something that touches with their own experience.'"

The princesses appear in the main work for the exhibition, In Between Reality and Dream: For the Shu collection, the princesses each get their own cleansing oil bottles and UV Under-Base Mousse.  Naturally I got all four oils.  As with the Unmask collection, the green one wasn't available in the U.S. so I had to go through E-bay.  Grrr. 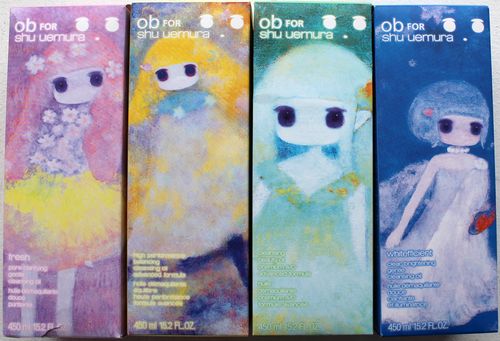 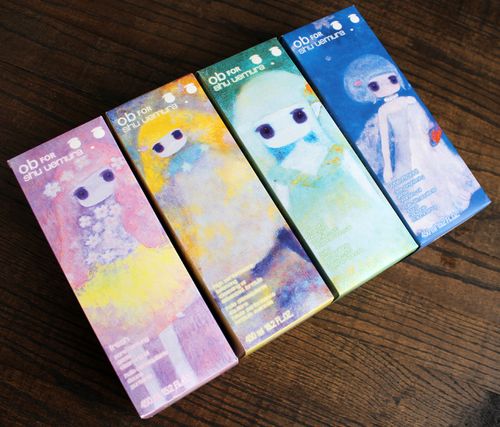 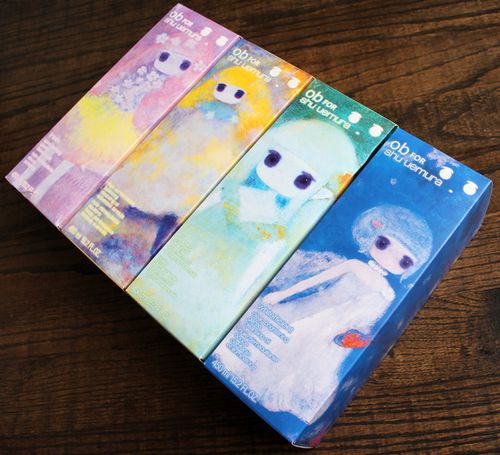 The main Shu Uemura website (of course, not the U.S. one - they never feel the need to provide full artist or collection info, which drives me insane) has descriptions of each princess.  Here we go!

"The Sakura [cherry blossom] princess slumbers peacefully through the seasons until spring.  she works her magic on flowers that are still buds and enchants them into full bloom.  When she slumbers, flowers wilt and are easily scattered by rain. This is why she dances without rest or sleep. (of course, she feels no fatigue.)  As spring draws to a close, she allows herself a bit of time to frolic in the human world before retiring into slumber until the following spring."  I love the little bunny immediately to her right. 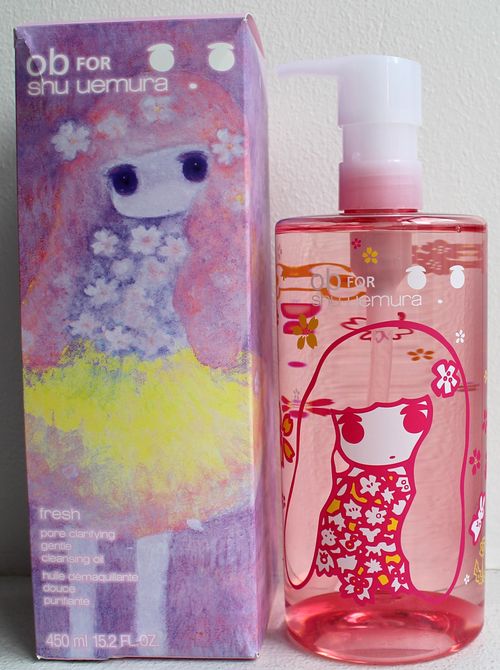 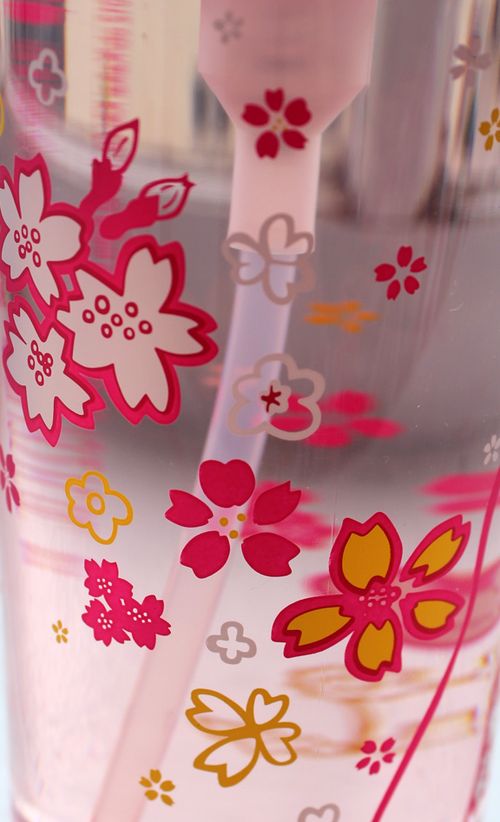 Next, we have the Moon Princess.  "One day, the moon is destroyed by a missile, a weapon in which humans take much pride.  Although bewildered and overwhelmed at the loss of her home, she feels sorry for the humans, who seem devastated at being plunged into darkness each night.  For their sake, the kind princess vows to gather every piece of the moon and put it back together again.  Since that day she has traveled to countless stars in search of moon fragments." 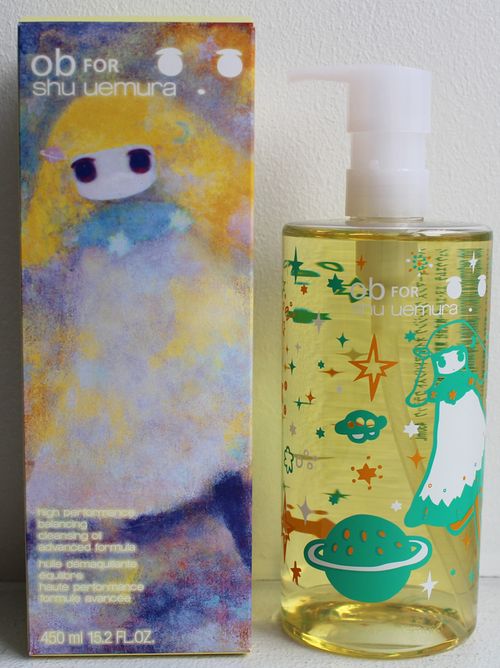 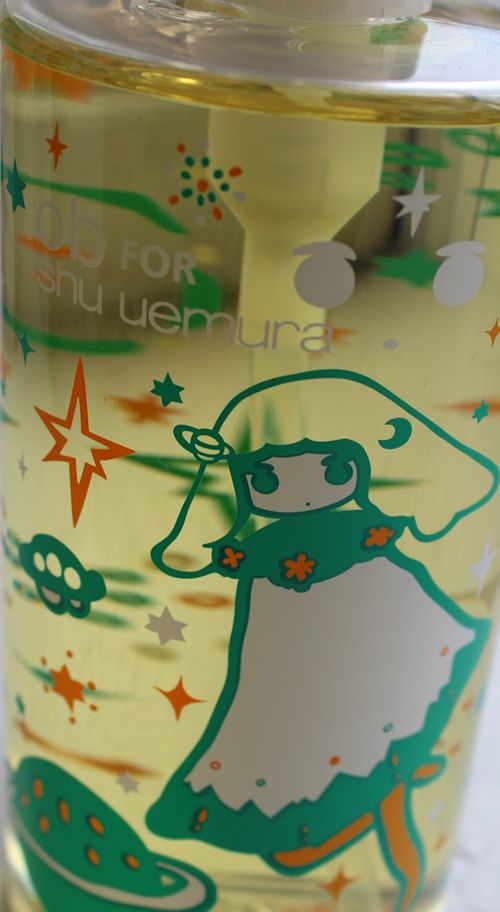 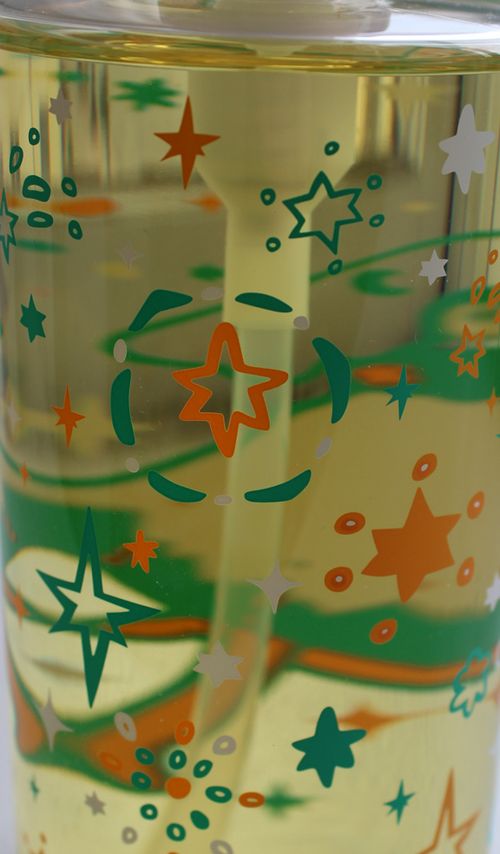 The green cleansing oil is represented, fittingly, by the Forest Princess.  "She romps through the trees on the fluff of the dandelion she holds in one hand.  This gentle princess nurses wounded insects and animals back to health.  Should a human find himself lost in the woods, she kindly escorts him out again. (The human, however, loses all memory of the encounter.)  She and the ocean princess are very close." 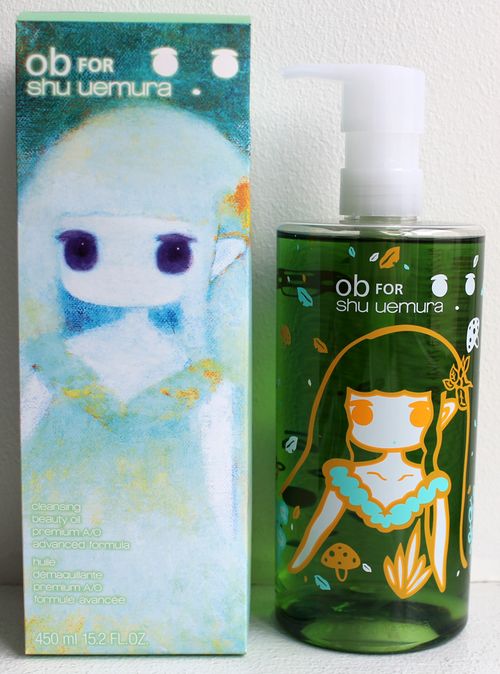 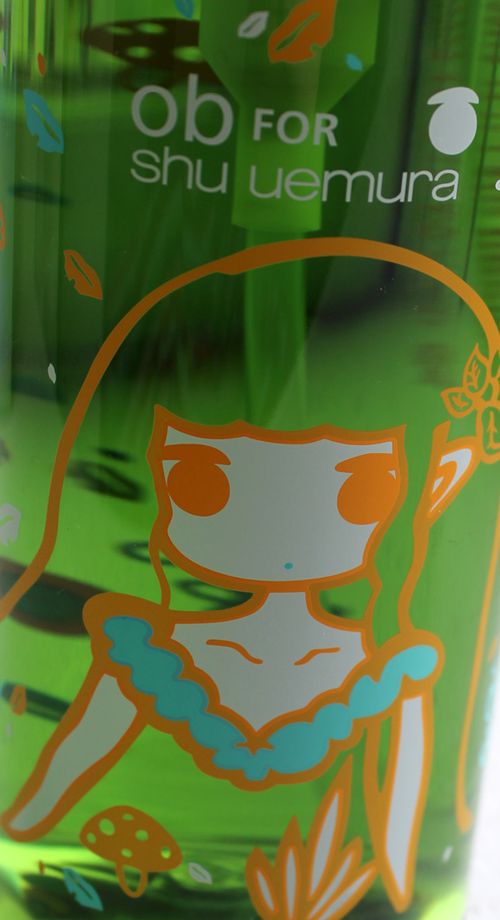 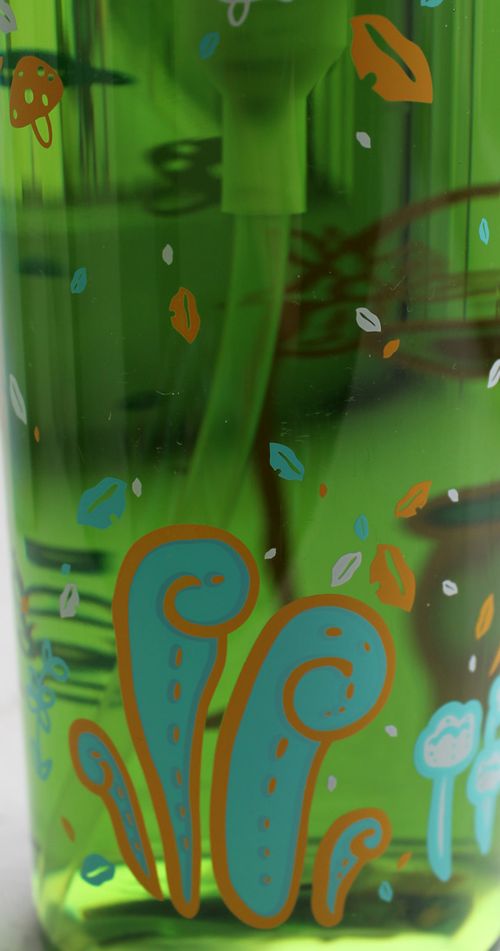 Finally, there's the Ocean Princess.  "Dedicated to protecting all precious marine life, the Ocean Princess is a guardian of the sea.  She is gentle by nature, but when faced with storms, she fights with courage and strength. In recent years, the sea has been beset with storms, troubling her greatly.  She has begun making pearls and selling them to humans, using the money she has earned to clean her beloved ocean." 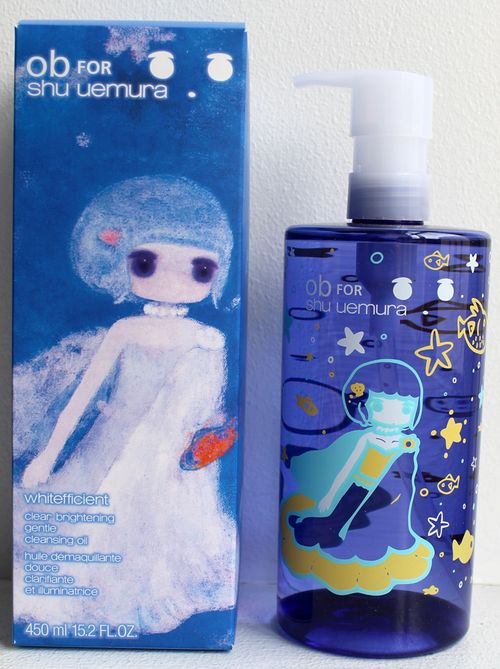 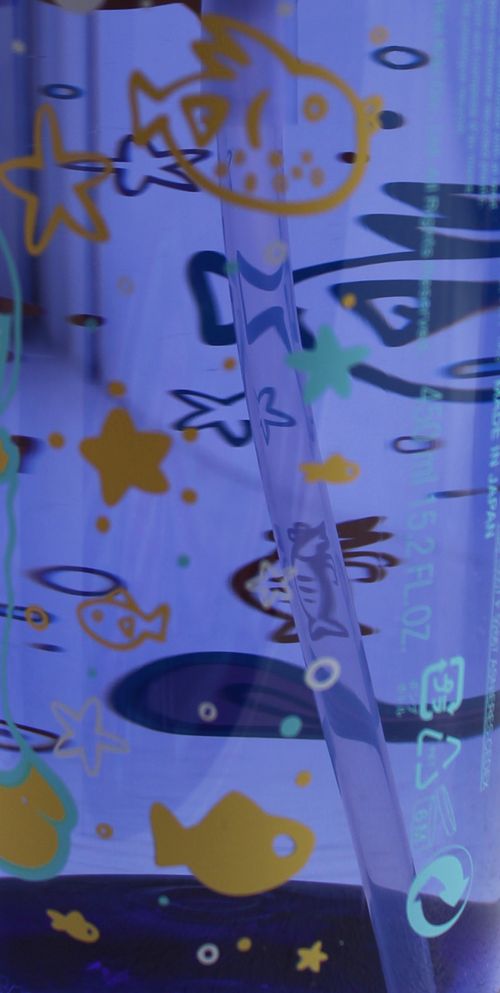 Be sure to watch this adorable video that captures the princesses in action.

While the Shu collection seems rather playful and sweet on the surface, lurking beneath there are some darker themes.  OB is young, but all of her work to date explores the sadness and anxiety brought about by contemporary society.  Her work in a previous show in Berlin suggests some of the more serious aspects expressed in the four princesses' stories.  In an interview with Art Slant, she states, "When I paint I am not particularly focused on the paint itself but how it can provide a feeling of comfort when looking at it as a viewer. However, the concepts for the paintings themselves are not really comforting in theme. They are personal and somewhat dark. People are usually surprised once they see them and learn the concepts and thoughts behind them. With this work I am aiming at some type of transcendence and my wish would be that people could find, through them, some type of release. Maybe people will view the paintings and they too can be freed from their darker feelings if they share similar thoughts. What I am painting is, yes, dark, but making people sad is not my intention...My work addresses all those bad things that happen in life, stemming from environmental pressures and events. For a lot of people my age in Japan there are a lot of societal pressures and I often don’t know how to respond in and to this type of environment. A lot of work in this show in Berlin ended up being heavily related to the earthquake that happened in Japan [referring to the series of devastating disasters on March 11, 2011]. I didn’t intend on painting something on the earthquake, but I feel as if has probably influenced my thinking somewhat."

Indeed, the 2012 Berlin show focused on the challenges faced by Japanese youth and the emotions brought about by these challenges.  From the gallery: "Culled from the chaos of Japan’s internet illustration scene, where thousands of anonymous artists submit works on a daily basis to social networking sites like pixiv.com, ob, JNTHED, and Haruka Makita are primary representatives of the faceless generation who have inherited a nation in the full throes of a political and social crisis. Though there are few direct references in their works to the disasters of March 2011, the nuclear accident at Fukushima, or the nation’s well documented institutional breakdown, each artist addresses a keenly felt social anxiety and disassociation from reality that come to define their era.  OB captures the turbulent emotions of today’s youth as felt in real time. With her delicate color palette and soft, feminine touch, her paintings evoke a gauze covered world of near suffocating uncertainty where innocence is protected only by insecurity. Despite this dark mood, there is also an air of defiance, reflected in the artist’s own struggle for independence and hope for the future."

There is definitely some of this angst and gravity in the Shu collection, princesses and flowers aside.  Imaginary disasters like the moon exploding, along with real environmental issues like ocean pollution and the desire to keep forests intact and free of human intrusion, build on OB's previous themes.  The efforts on the parts of the princesses to rebuild their worlds and reclaim natural resources also hint at Japan's ongoing attempts to alleviate the devastation caused by the 2011 tsunami.

Stylistically, her current paintings are also more or less the same than her earlier work.  She says, "I like and have always liked Western style painting, as opposed to the traditional Japanese work. I believe that the inspiration for my colors, in particular, comes from this type of Westernized style."  Some examples: 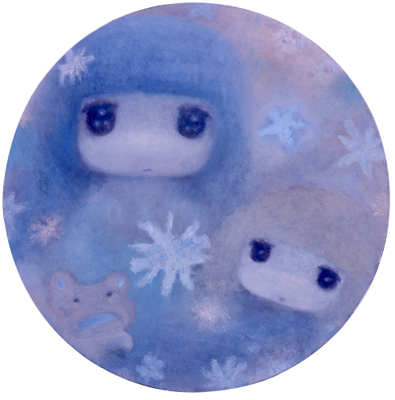 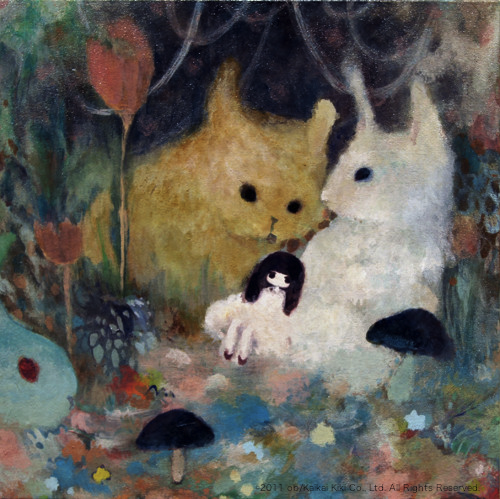 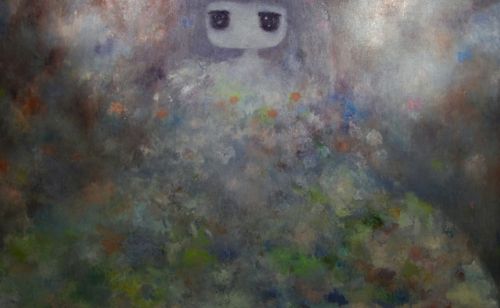 What surprised me a bit is how well the delicacy of the rubbed pastel chalk and other pigments she uses translated to the cleansing oil boxes.  Here's a closeup from the Sakura box: 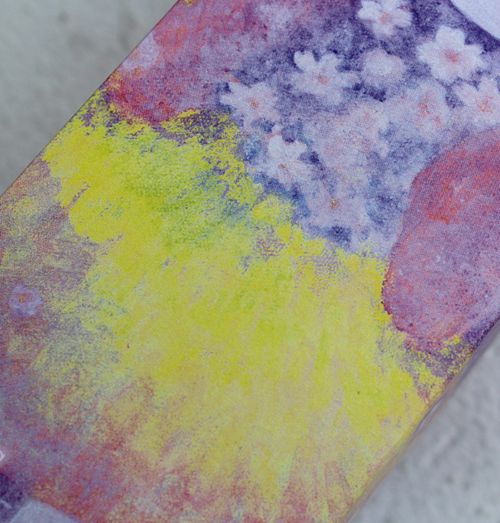 In another interview, she states the most important part of her work is "the initial visual impact" and that she "strive[s] to create paintings that will catch people's attention on first look...for instance, the large eyes."  The gallery in Berlin that hosted the 2012 show adds,  "Ob’s female characters seem at times to have evaporated, with form and features melding with swirling psychologically charged landscapes, leaving only their large, round, opaquely black eyes and tiny open mouths discernible."  Hence this motif appearing on the upper right corner of all products in the Shu collection.

As with the Mamechiyo collection, Shu went all out in terms of launching the collection's release.  In addition to a live painting event at the flagship boutique in Tokyo, there was an amazing press party in the Phillipines.  Look at this beautifully designed display. 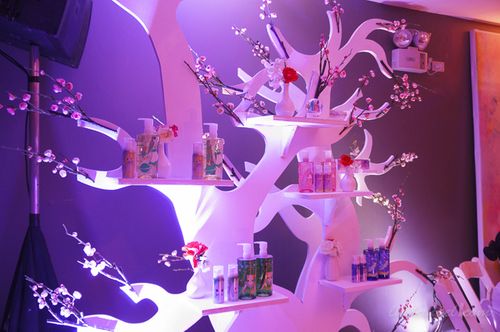 I really hope whoever is in possession of this snow globe treasures it the way I would.  Or, heaven forbid, hasn't thrown it away. 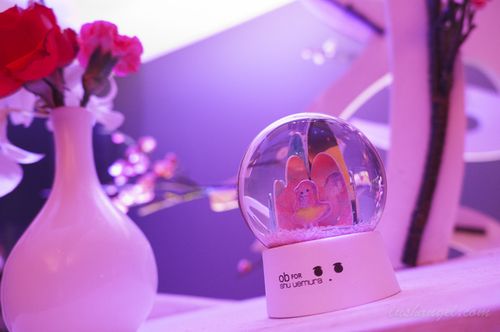 There was even a station with notepads where people could write down their aspirations and post them to the "Dream Board". 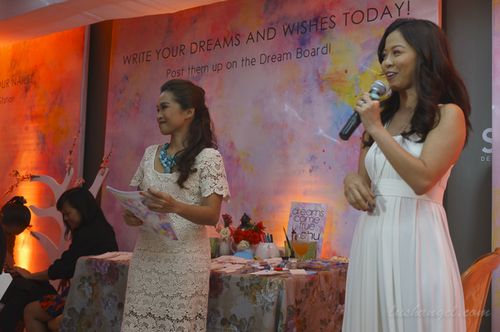 Overall I adored this collection.  Shu has such a great track record for allowing talented artists to share their work with an audience that might not see it otherwise, and the selected artist's oeuvre always has tremendous visual appeal that also happens to work well on beauty packaging.  I was really impressed this time not just with the artwork but with the artist herself.  In the few interviews I've seen/read she seems to be quite mature for being so young, and very genuine, which is a rarity in the art world.  Living so close to MICA (the Maryland Institute College of Art, for those of you outside of B'more), I see A LOT of pretty obnoxious-looking, phony poser art students regularly.  I can't see OB traveling in their circles.  I do worry that she'll get taken advantage of because she appears to be very down-to-earth and honest, and the art world can be brutal to nice people like that.  But I think she'll ultimately be okay due to both Murakami's guidance and her own intelligence.

So what do you think of this collection?  Which princess is your favorite?  Obviously mine is the Ocean Princess since she is very close to a mermaid.  :)