MM Musings, Vol. 10: What does an ethical Makeup Museum look like? 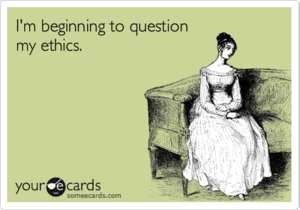 There are literally thousands of general ethics guidelines for museums and entire books written about how to run a museum ethically.  In this installment of MM Musings I'm hoping to narrow down what the main areas of ethical concern are and how general museum ethics protocols can be specifically applied to a museum devoted to cosmetics.

With most museums, the one of the biggest ethical issues is procurement - in the past, some major museums gathered their objects in ways that are considered unethical, if not illegal (the most prominent cases being the Elgin Marbles, Nazi-looted art, and the plundering of artifacts from indigenous populations).  But there is no moral quandary with how items are collected for the Makeup Museum, as these are contemporary items that I buy with my own money.  I'm certainly not shoplifting and I do not receive anything for free from cosmetics companies.  And while I buy some of the items through E-bay, with the exception of one item, I have not bought anything from sellers that clearly purchased the entire stock of a highly sought-after collection purely to re-sell it for several times the retail cost (MAC's collections are famous for exorbitant E-bay prices).

However, a makeup-focused museum does raise other ethical questions.  As I see it, the three main topics in running an ethical Makeup Museum are: 1.  transparency - making the museum's procurement and other policies clear to the public; 2.  cosmetics production, i.e. do the companies that manufactures these items engage in unethical practices; and 3.  Sponsorship:  how can the Makeup Museum partner with cosmetics companies in a way that will maintain its integrity?

For now, this isn't an issue.  I have always been up front about how I obtain the Museum's objects, and its governance and mission have always been clear as well.  Right now, museum operations are straightforward - I buy the objects with my own money (pointing out any gifts from friends or family members) and from a blogging standpoint, it's a one-woman show.

This is the most perplexing issue I grapple with, and it's unique to a museum that showcases cosmetics.  I know that some of the items I purchase for the Museum are produced by brands that are owned by L'Oréal, a company that still supports animal testing in some way or another.  I also wonder about the working conditions at the factories that produce cosmetics.  By purchasing these objects, I am complicit in the suffering of animals and/or worker exploitation.  I'm not really sure how to fix this problem without compromising the Museum's mission.  There are certain pieces that are critical to exhibitions...it's definitely a conundrum that will need to be resolved should the museum become a bona fide 501 c 3 organization.

Many museums accept corporate sponsorship for exhibitions and other programs.  While I do like the idea of having the Makeup Museum be totally independent of corporate handouts, it would be a huge financial boon to have a major company sponsor some aspect of the Museum - a website overhaul, a pop-up exhibition or the donation of objects.  As long as I had complete oversight of the exhibition or website content (making sure it holds true to the objectives of the Makeup Museum rather than acting as a glorified ad for the company's products), I think corporate sponsorship could be done ethically.

These are the biggest ethical topics I can think of right now.  What do you think an ethical Makeup Museum consists of?