Lovin' from the MAC oven

In case you haven't had your fill of desserts from the Sweet Tooth exhibition, I'm bringing you more sweet treats courtesy of MAC's Baking Beauties collection.  I picked up the two Pearlmatte face powders:  In For A Treat and Pink Buttercream, which feature delicate, frosting-like floral designs.  And for your viewing pleasure I put them on this positively adorable macaron wrapping paper from Paper Source. 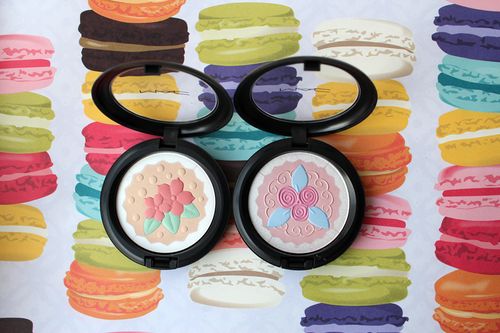 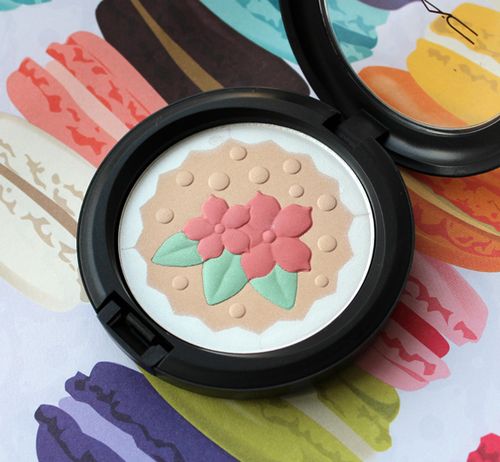 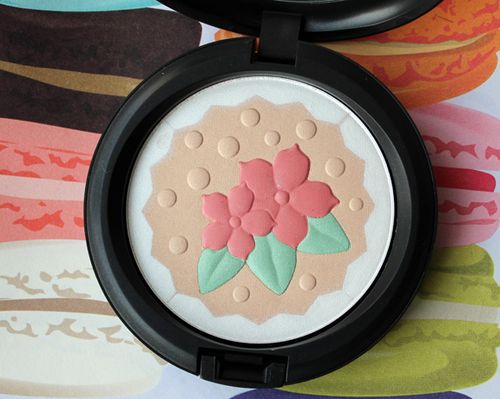 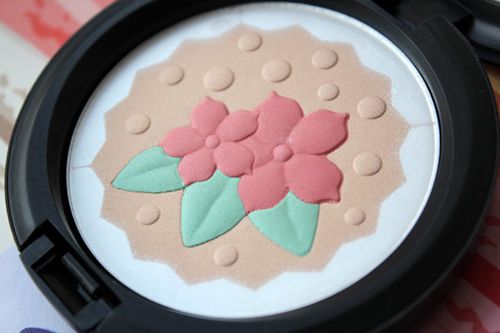 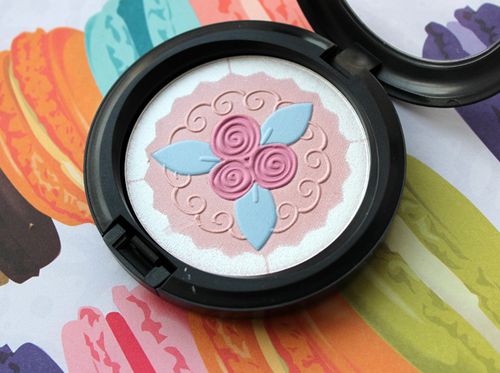 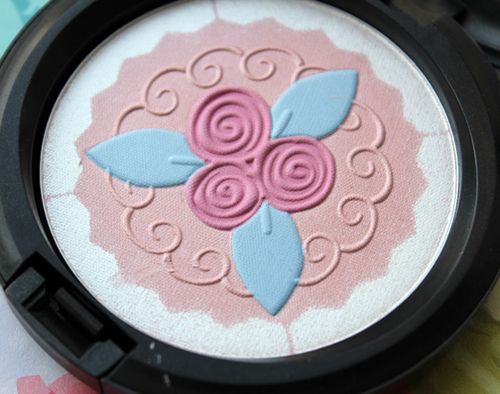 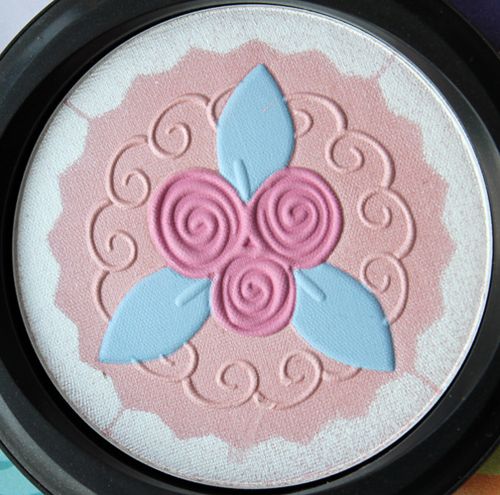 I also love the promo image with its abundance of beautifully decorated cakes and a plate of macarons - the model is purely secondary to them!  Incidentally, I think the green plate on the lower right is the same one I used to hold the Ladurée trio in the Sweet Tooth exhibition. 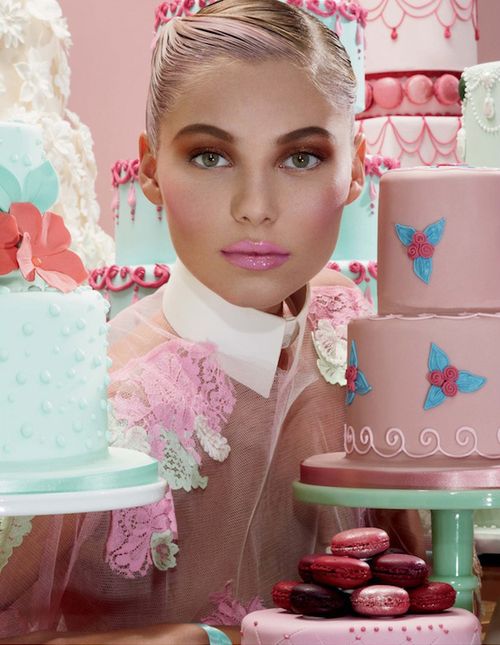 I can't look at cake displays without immediately thinking of Wayne Thiebaud's famous cake paintings, which he painted from memories of his work in restaurants rather than actual displays.  Here is perhaps the best-known one, Cakes (1963).  B'more is so close to DC - I should make a trip to the National Gallery to visit it again. 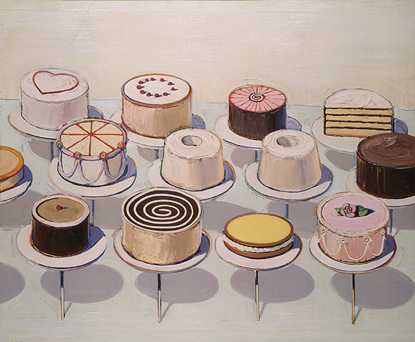 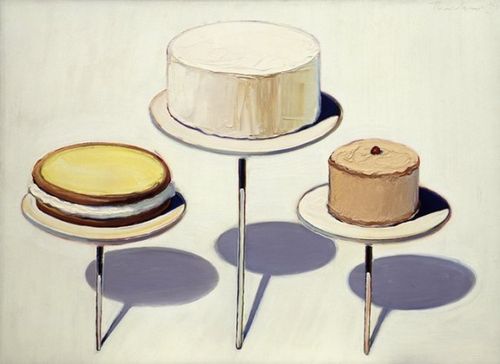 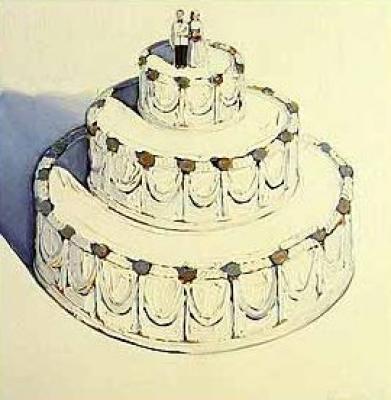 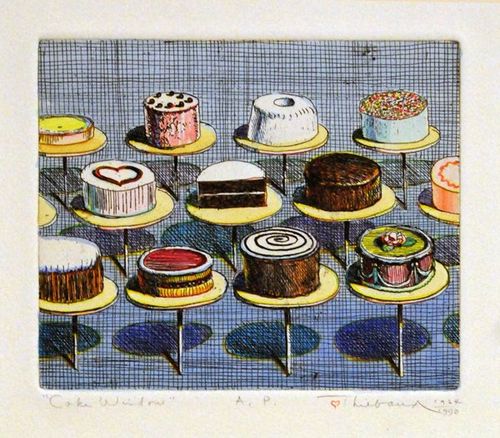 In my opinion, his work is very appealing because it conveys nostalgia and is completely unpretentious.  An article by Cathleen McGuigan for the Smithsonian hits the nail on the head in describing what is so enjoyable about Thiebaud's cakes, and I think it could be applied to his other subjects as well (lipsticks, hot dogs, gumball machines, just to name a few.)  "In a contemporary art world enthralled with such stunts as Damien Hirst’s diamond-encrusted skull, Thiebaud is wonderfully ungimmicky. He belongs more to a classical tradition of painting than to the Pop revolution that first propelled him to national attention in the 1960s. Then, the sweet everydayness of his cake and pie pictures looked like cousins of Andy Warhol’s soup cans. But where Warhol was cool and ironic, Thiebaud was warm and gently comic, playing on a collective nostalgia just this side of sentimentality. He pushed himself as a painter—experimenting with brushstrokes, color, composition, light and shadow. The cylindrical cakes and cones of ice cream owed more to such masters of the still life as the 18th-century French painter Chardin, or the 20th-century Italian Giorgio Morandi, as critics have pointed out, than to the art trends of the time."  That's all well and good, but was the man just obsessed with desserts and food in general?  Of course not.  As McGuigan explains, "Over the years Thiebaud has repeatedly tackled the same subjects—not to perfect a formula but to keep exploring the formal possibilities of painting. 'What kinds of varying light can you have in one painting?' he asks. 'Direct glaring light, then fugitive light, then green glow. It’s a very difficult challenge.'...When Thiebaud paints an object or form, he famously surrounds it with multiple colors, often stripes or lines, of equal intensity, to create a halo effect—though you might not notice that unless you look closely. 'They’re fighting for position,' he says of the colors. 'That’s what makes them vibrate when you put them next to each other.'"  Though some see a loneliness or melancholy in his cake paintings, I choose to perceive them as  taking on a "celebratory" tone, as one critic states.  Thiebaud himself has denied any sense of sadness in these works.  In a PBS interview from 2000, he shares why it was risky for him to make paintings of cakes and pies:  "It's fun and humorous and that's dangerous in the art world, I think. It's a world that takes itself very seriously, and of course, it is a serious enterprise, but I think also there's room for wit and humor because humor gives us, I think, a sense of perspective."

I think the pretty designs on In For A Treat and Pink Buttercream would be right at home in a Thiebaud painting.  :)  Did you pick up anything from Baking Beauties?  And do you like Mr. Thiebaud's work?