I spotted Les Tablettes de Bastet back in February at British Beauty Blogger and couldn't find it online anywhere.  (As of this morning, however, it's available at the U.S. Dior website).  Through my searching I came across Dior Beauty-Palazzo in Las Vegas, which advertised the palette on their Facebook page.  Much as I hate Facebook, I was thrilled to see some mention of it at an actual boutique.  My fingers couldn't dial the number fast enough!

Look how pretty they wrapped it for me. 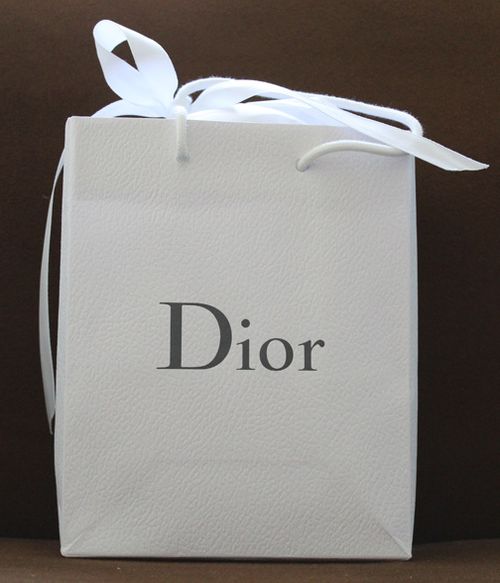 The outer case is a sleek grey which beautifully compliments the heavy grey stone of the palette itself. 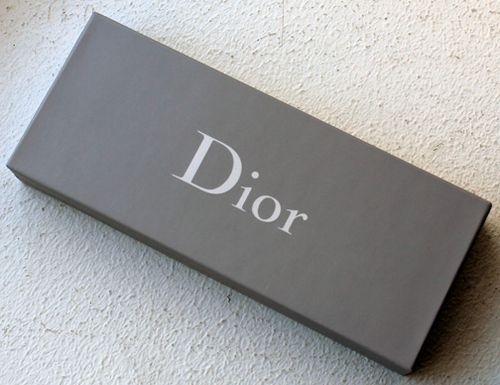 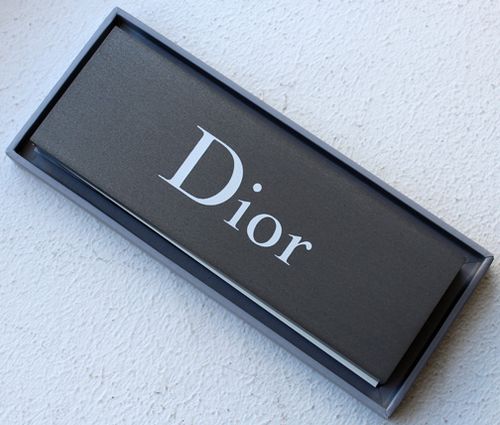 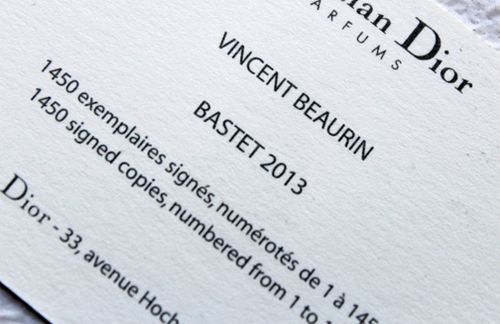 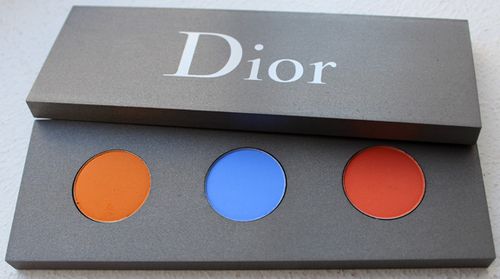 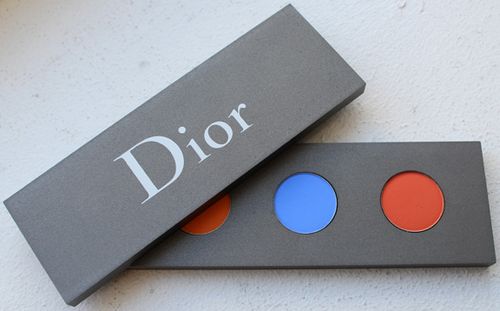 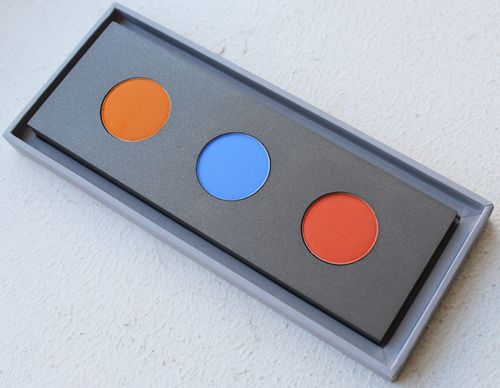 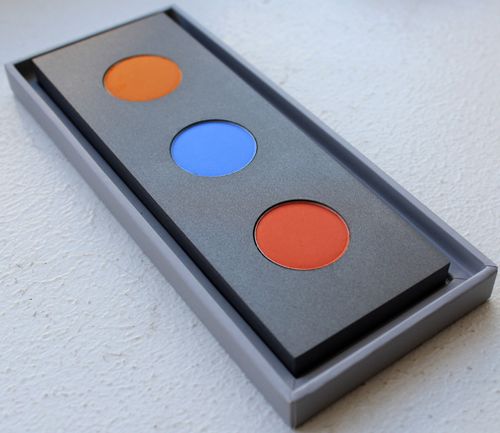 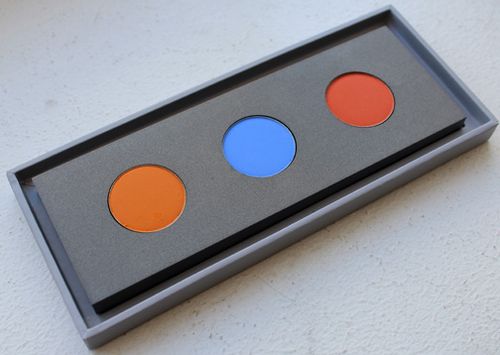 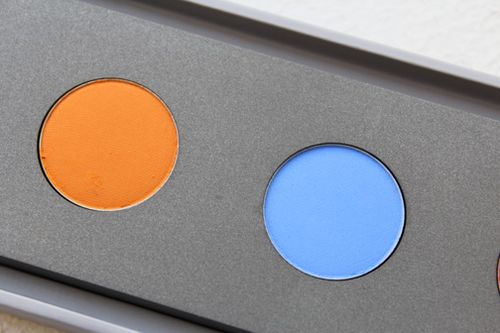 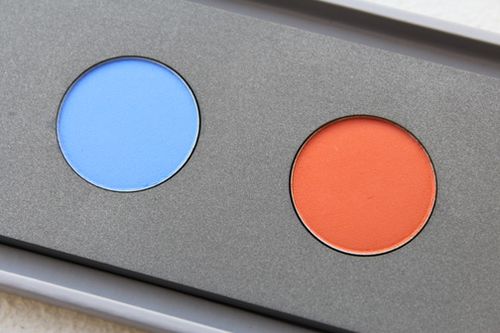 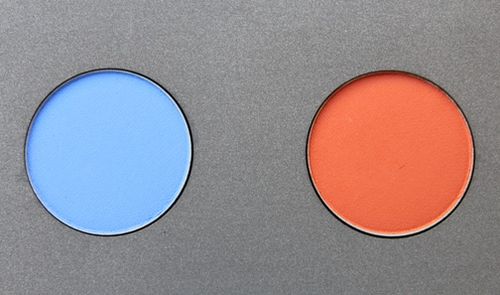 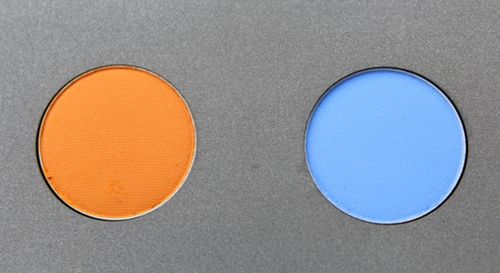 Apparently only 1,450 were made.  The edition number and Beaurin's signature are inscribed on the back.

The stone case is magnetized.  I must say the two stone pieces clacking together made me nervous about the palette getting damaged. 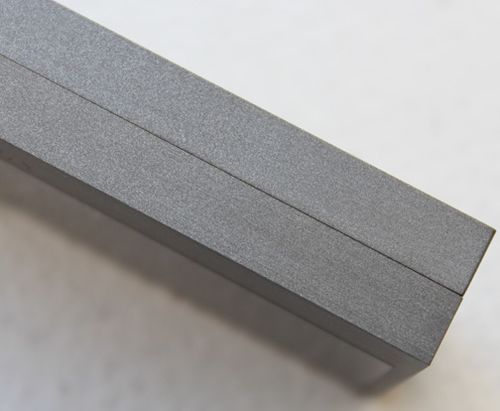 Now that we've seen the pictures, I bet you're wondering what this palette is all about.  Les Tablettes de Bastet was created by artist Vincent Beauin, who had previously taken part in Dior's "Lady Dior as seen by" project in which contemporary artists concocted their own interpretations of the iconic bag.

Dior Magazine (online) has a good summary of the inspiration for the palette.  "Christian Dior loved artists; and when he himself was young, dreamt of becoming an architect. From this childhood dream he would maintain an overwhelming love for art and those who made it, becoming friends with Jean Cocteau, Christian Bérard, Max Jacob and many more. The house of Dior has continued to forge this direct link with the world of art, regularly collaborating with numerous contemporary artists. Vincent Beaurin, the French painter and sculptor, is the most recent to create an original work for the house: 'Les Tablettes de Bastet', an eyeshadow palette inspired by the Egyptian divinity Bastet, the goddess of music and dance, of feasting and love, 'like a very ancient stone object that bears the traces of myth and ancestral practices,' according to the artist.

The palette is composed of two magnetized tablets in Trianon gray – one of Christian Dior's favorite colors – of which one is punctuated with three disks of natural pigments in shades of sapphire, saffron, and silex. This artwork in the style of a devotional object expresses, for Vincent Beaurin, the desire to place 'the practice of make-up in a much wider expanse of time than just a single season.' It's an ode to the color and sobriety, the  purity and the accessibility of art; a step into the core of the output of this French artist's who, already in 2010, reinvented the Lady Dior as a green and red talisman made of polystyrene and quartz sand."  Here is his take on the Lady Dior bag, if you're curious.

This palette is an extension of Beaurin's previous work.  In 2011 and 2012 he made several sculptures based on the Egyptian goddess Bastet.  Beaurin's take on this goddess:  "In ancient Egypt, Bastet was the daughter of the sun-god Ra. In the form of a cat or a woman with a cat’s head, she’s the goddess of music, dancing and feasting. She has the magic power which stimulate love. Bastet is the guardian goddess of women. She has fearsome fits of anger, because something feline is always lurking in her. So she’s identified with the dreadful Sekhmet, sent to earth to punish men for their arrogance. Bastet is a multi-faceted goddess, incarnating gentleness and fierceness." 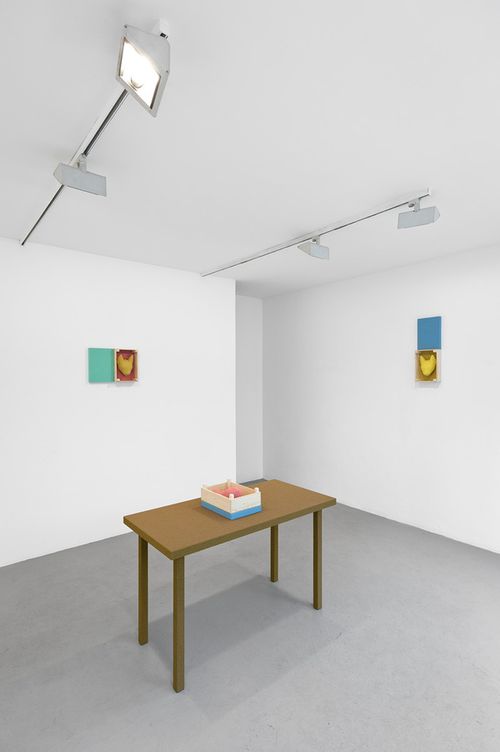 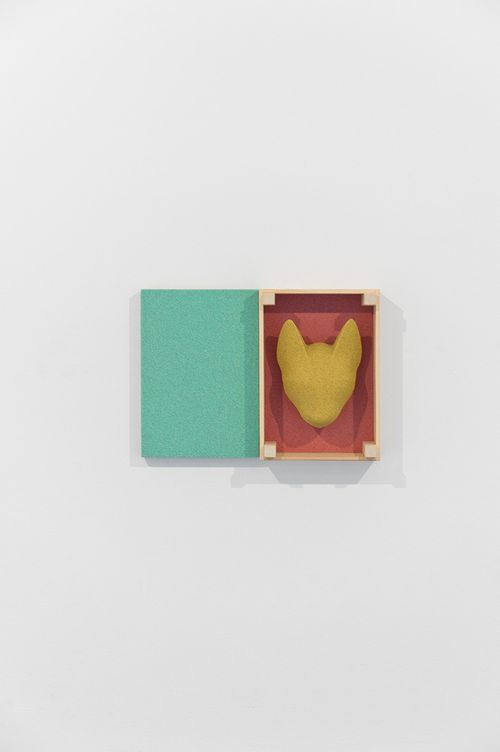 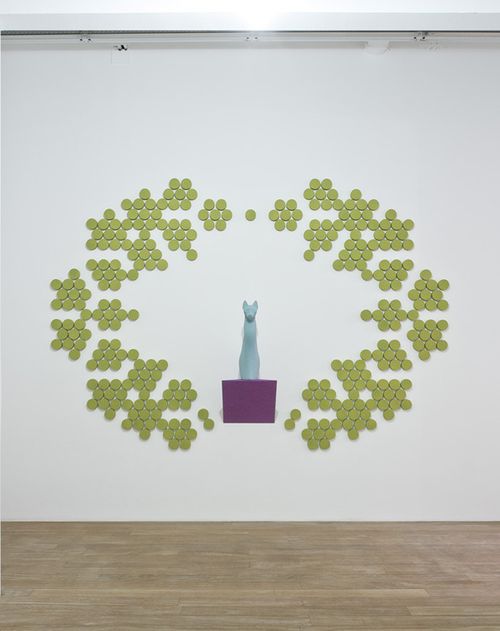 In this view, you can see that Bastet's silhouette is replicated on the palette insert. 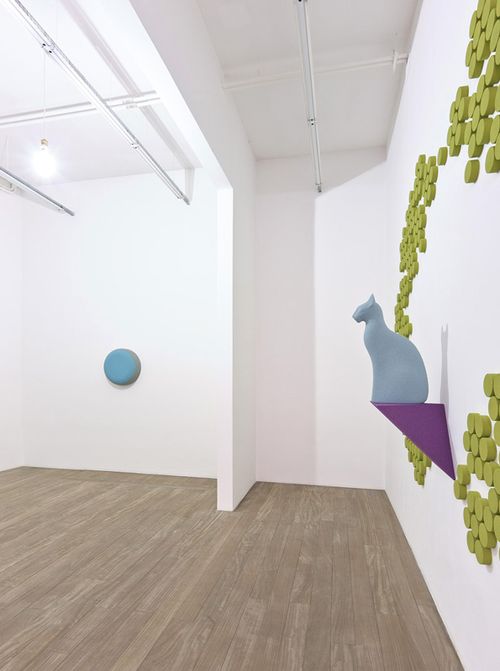 Beaurin is also known for his "Spots", series of colored circles made of polystyrene and quartz sand mounted to the gallery's walls.  The color combinations lead to a soothing, almost hypnotic effect.  We can see the influence of Triptyque Bleu (2011) in the Dior palette: 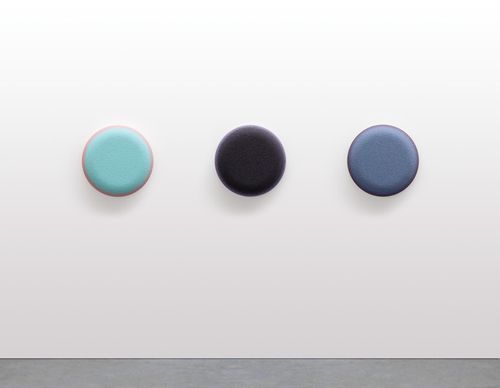 Now, how does all this relate to the Dior palette?   While I couldn't find out exactly why Beaurin opted to reinterpret ancient statues of Bastet or any in-depth explanations of his fascination with the goddess, this four-page interview at Beaurin's website is chock full of details about the Dior piece.   Some of the more notable quotes:

- Beaurin sees the house of Dior as aligning closely with Bastet.  "Dior is also a hieroglyph, a very old story, and why not, a story about a goddess."

- Beaurin's choice of the word "tablet" stems from his perception of the word, which he believes "establishes a link between writing, memory and ancient objects, often made of schist, on which people crushed pigments to produce eye make-up."

- In addition to expanding on the "Spots" works, the round shape for the colors was chosen so that they would be better suited to use of the palette.  "Each colour is a fullness in itself. In a way, each colour is a world, a planet.  Similarly, our eyes are round. The circle is a full shape. It recurs often in my work, perhaps precisely because it involves abstraction, going beyond form. Something
round also seems better adapted to the touch than something angular...A lot of people ask me if they can touch my pieces. This project is a way of answering them.  You’ll notice that there’s no brush to take up the colour and apply it. Fingers are the sole tools, with the skin, here the eyelid, as the sole destination."

- The palette clearly expands on Beaurin's own work but also shows his admiration for Jean Arp's biomorphic forms. "Through my project’s simplicity, the weight of the tablets, the softness of the materials, the warmth and intensity of the colours, by the involvement of a woman’s body, her skin, mystery, the notion of space, and all the feelings resulting from that, it has biomorphic echoes...eyelids are to female faces what wings are to butterflies."

- The most interesting part of the interview for me was the artist's explanation of the colors he chose.  On making the palette consist of just three colors, he says, "Three colours are enough to create the interplay of a chromatic infinity, a whole complexity. Three monochrome disks on a grey ground make an abstract landscape."  Indeed, this overview of Beaurin's work states that he creates abstract landscapes using the spots.  The colors chosen by Beaurin - Saffron, Sapphire and Silex - are part of his fascination with the shape of the letter S.  And while Beaurin has never been to Egypt, the colors function as a sort of "prism" - his personal conception of Egypt is expressed through these particular hues.  "The repetition of the S, the initial letter of the name of each colour, gives pace to the way the words are uttered, Saffron Sapphire Silex. This pace is part of the dynamics, of the relations occurring between the elements making up the landscape. I also like S for its design, two inverted spirals, an unfinished 8, and for its phonetics, the phonetics of silence...this object is also a vehicle, an instrument of sight and projection and--why not?—a sort of Egyptian prism."  Additionally, the colors have "an atmospheric character" that show up best against the dark grey of the stone.  Beaurin integrated the grey that Dior was so fond of, but also says he was influenced by Cezanne's love of working under grey skies as well as "the Ardennes sky, unchangingly grey, like slate roofs in the rain, turning ink-like or silver."  He adds, [U]nder a grey sky or against a grey backdrop, colours come out unreservedly, without any tension. Grey helps to optimize the way we observe colours, their radiance, and their persistence when they disappear and their reactions when you put them together."  Finally, Beaurin notes that while "Spots" typically combine two colors within each circle, the circles in the Dior palette are monochromatic.  "The spots are part of a purely meditative and contemplative relationship...two colours are articulated. They meet each other and are mixed together in a zone of intense vibrations. The Bastet tablets are a sort of arrangement, where three disks of monochrome colour are in a way in orbit with each other. They are as if in mid-air and their encounter is waiting for desire and the intervention of the person whose eyelids will be the ideal surface for mixing them."

So there you have it.  You can also check out this strange (and, like his Spots, quite hypnotic) video on the palette directed by Beaurin.

While I do love this piece, I think its appeal lies more with the art collector than the makeup fan.  I honestly don't think a lot of beauty fiends would actually use it.  Beaurin's color theories are intriguing and are implemented quite well in his artistic endeavors, but they don't necessarily translate to makeup - it's difficult to say how one would apply these colors, as they don't seem to be in harmony from a cosmetic standpoint.  And while the magnetic closure is a sophisticated, artsy touch, I can tell you that without some sort of hinge to hold the two pieces of stone together, the palette would be a bit cumbersome to handle.  Thus, unlike Dior's Anselm Reyle collaboration, this doesn't have a lot of mass appeal (but maybe it's not supposed to).  Nevertheless I adore Les Tablettes de Bastet because it incorporates not only the two motifs ("Spots" and Bastet) that Beaurin is best known for, but also his entire artistic outlook.