I'm counteracting yesterday's snow (!) with some oh-so-springy palettes from Elizabeth Arden.  These are the first Makeup Museum purchases from this company, and as far as I know, the first time sunflowers have been used as a motif in makeup packaging (save for some vintage compacts).  I was so excited to see these as sunflowers have been my favorite flower for as long as I can remember.

The New York in Bloom collection consists of a teal eye liner and nail polish, plus three palettes:  a bronzing powder and two eye shadow trios.  While I'm not crazy about the cartoonish flowers on the outer cases, I love the gorgeous embossed sunflower patterns on the inside. 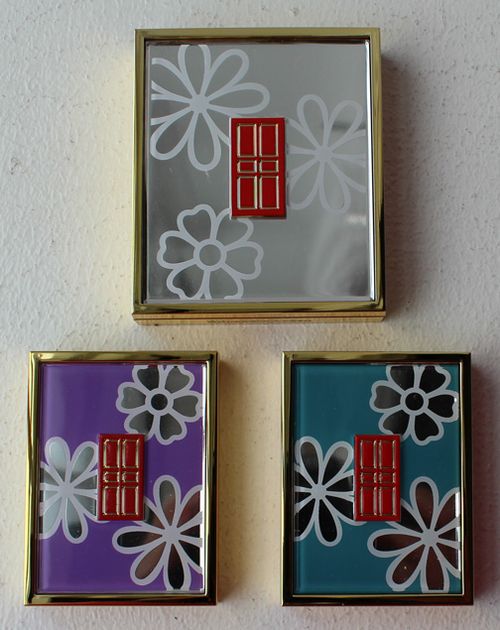 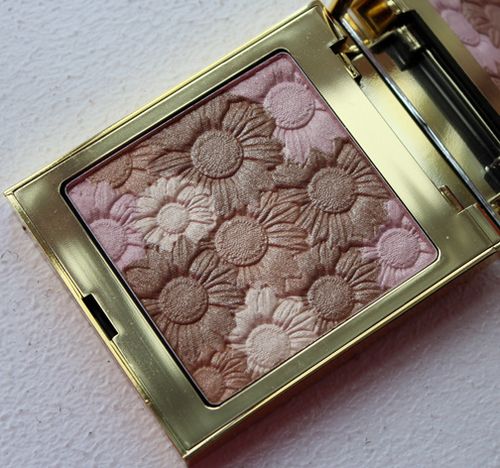 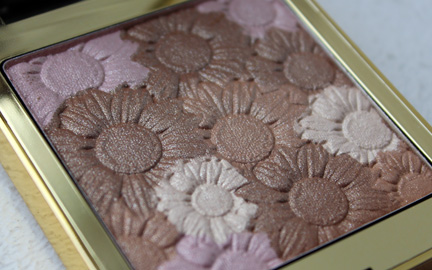 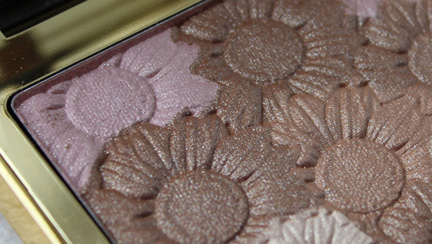 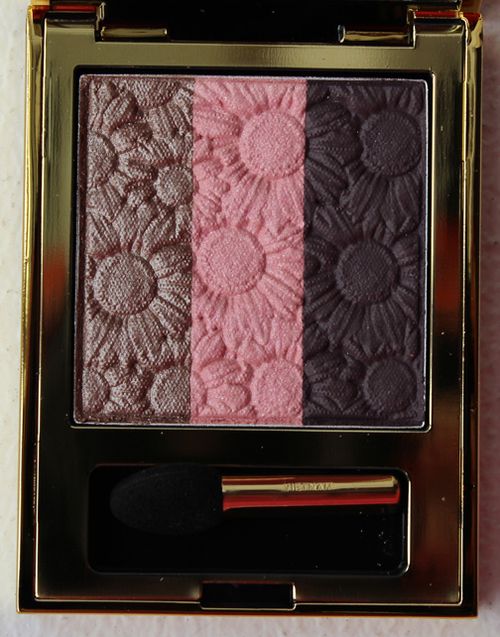 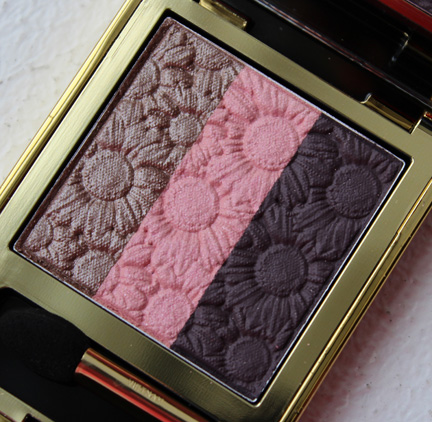 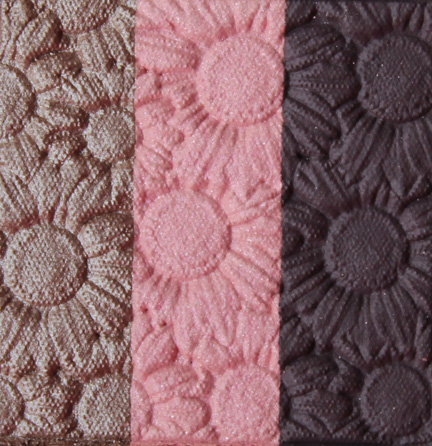 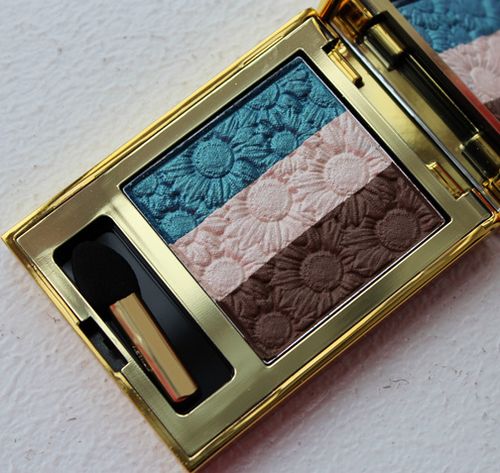 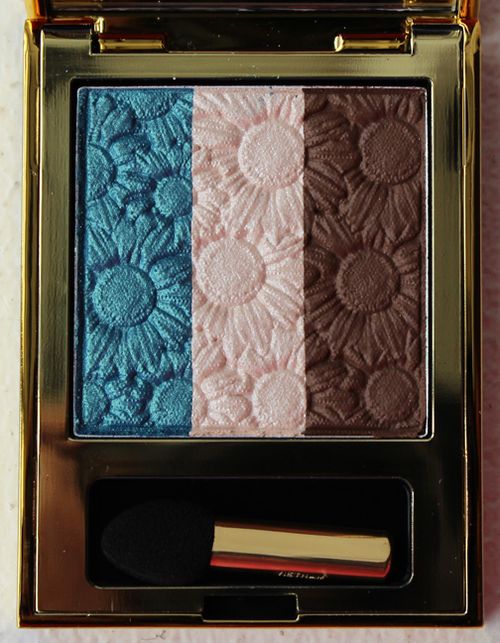 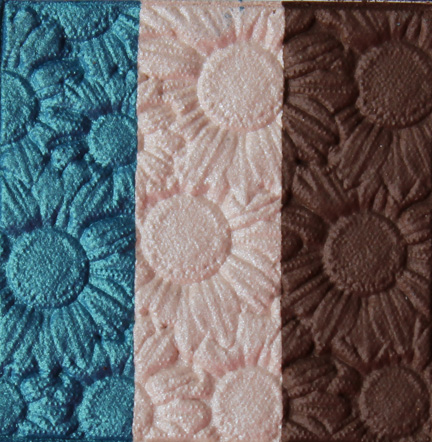 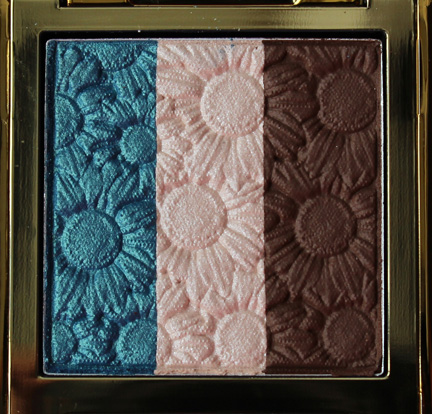 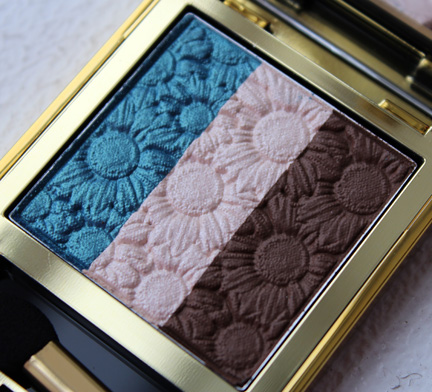 While I do think these are beautiful pieces, I couldn't find any information on the relevance of sunflowers to the Elizabeth Arden brand.  I do know of their Sunflowers fragrance, but other than that there haven't been any references to sunflowers - it's not integral to the brand's identity in, say, the way the rose is to Lancôme or the camellia to Shiseido.  But that's okay because it gives me a chance to talk about sunflowers in art instead!

We're all familiar with Van Gogh's sunflower paintings, but many other famous artists used this bloom as their muse too.  We'll start all the way back in the 1600s with Van Dyck's Self-Portrait with a Sunflower, in which the sunflower was generally seen as "an emblem connected with royal patronage" but could also signify "Van Dyck himself...the picture is to be understood primarily as an expression of the painter's devotion to the king rather than as an acknowledgement of royal patronage." 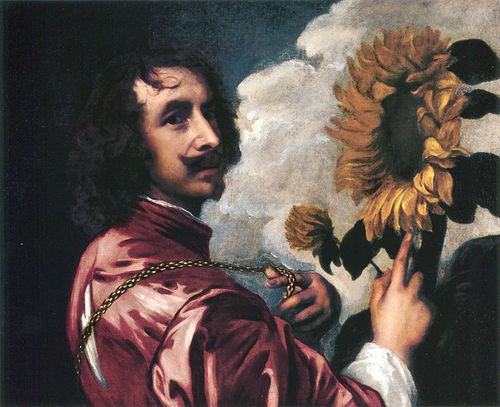 Fast-forwarding a few hundred years (hey, I can't include EVERY single sunflower-related work of art!) we have Pre-Raphaelite Edward Burne-Jones's fascination with sunflowers.  He wrote to his friend Frances Homer, "Do you know sunflowers?  How they peep at you and look brazen sometimes and proud - and others look shy and some so modest that up go their hands to hide their brown blushes...I could draw them forever, and should love to sit for days drawing them...it is so right to make them talk mottoes, they all look as if they were thinking."  These include a stained glass panel at Christ Church in Oxford depicting scenes from The Legend of St. Frideswide and a drawing, Childe Roland to the Dark Tower Came (1861): 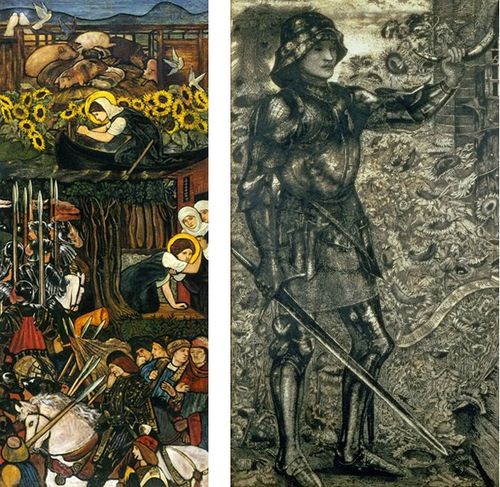 There's also The Wine of Circe, based on a poem by fellow Pre-Raphaelite Dante Gabriel Rossetti: 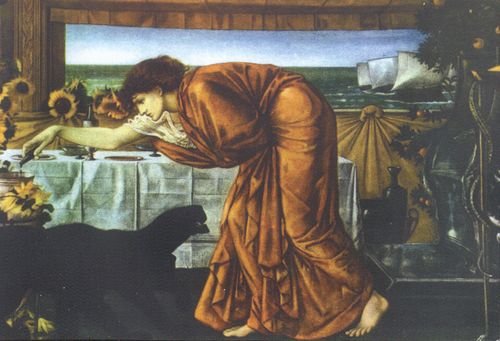 Some more examples from around Van Gogh's time include Mary Cassatt's Mother Wearing a Sunflower on Her Dress (1905), while Paul Gauguin actually painted a picture of Van Gogh painting sunflowers in 1888.  How very meta. 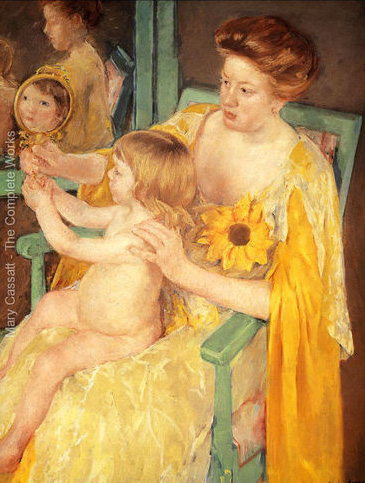 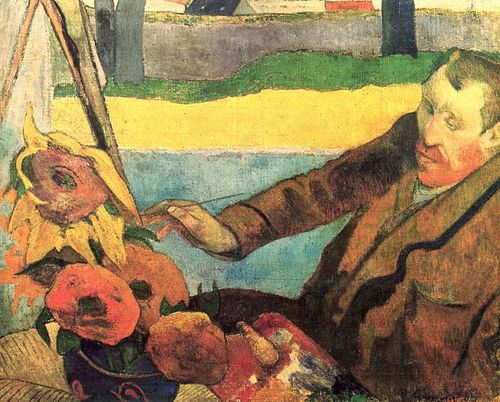 (images from marycassatt.org and commons.wikimedia.org)

Monet also got in on the sunflower game. 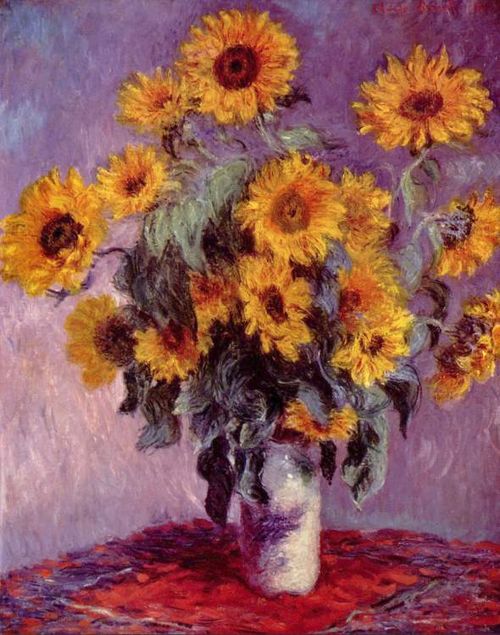 While Gustav Klimt may be known best for The Kiss, he completed several lovely paintings of sunflowers (these are from 1905-1907).


There some great representations of sunflowers later throughout the 20th century.  Some highlights: 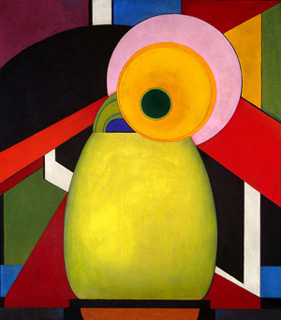 Tons of sunflowers by Emil Nolde (these range in date from 1920-1932).  I had a hard time narrowing it down to just these four works!  Nolde was a huge admirer of Van Gogh, and "it took considerable boldness for a painter who admired van Gogh as much as Nolde did to paint sunflowers, yet he often returned to them and added a new and rich interpretation to the motif." 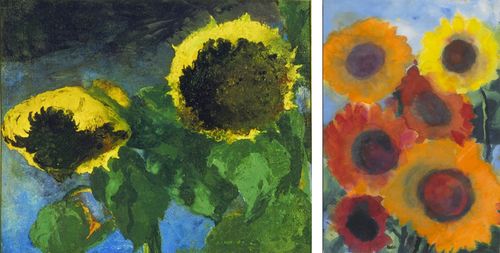 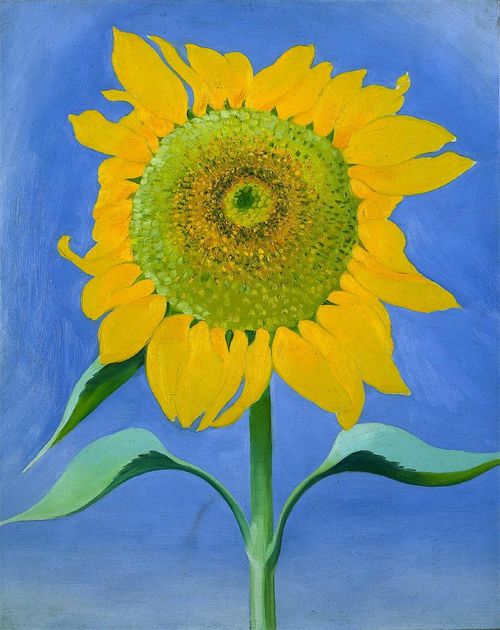 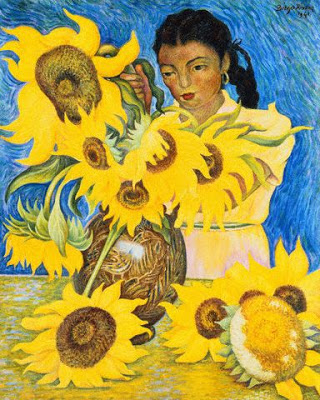 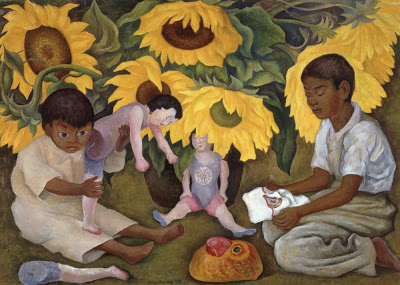 In the latter half of the 20th century we have abstract artist Joan Mitchell's take on sunflowers, which she painted early on in her career and revisited throughout - below is Sunflowers III (1969) and Sunflowers (1990-1991). 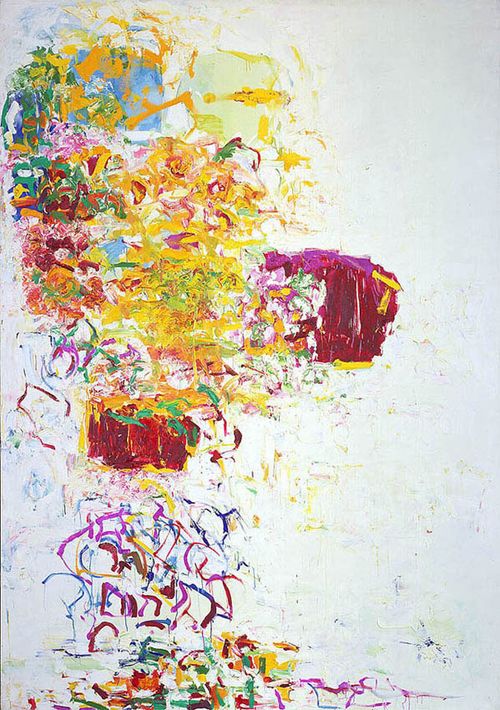 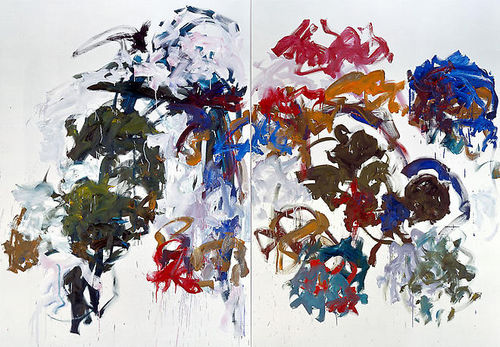 If I were an artist, sunflowers would be my number one subject.  :)

Anyway, I hope that this little survey of sunflowers throughout art history was an acceptable substitute for more in-depth information on Elizabeth Arden's use of sunflowers in the company's spring 2013 collection.  I found the palettes to be a refreshing change from the usual florals we see each spring (especially roses).

What do you think of these palettes?  And what's your favorite flower?  Has it been featured on a makeup item before?