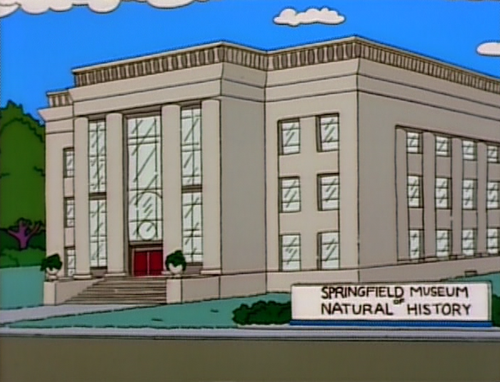 The following exchange is an excerpt from an episode of the Simpsons in which Homer takes his daughter Lisa to the Springfield Natural History Museum, which is closing due to "lack of interest".

Homer: What do you mean by "suggested donation"?
Admissions clerk: Pay any amount you wish, sir.
Homer: And uh, what if I wish to pay... zero?
Clerk: That is up to you.
Homer: Ooh, so it's up to me, is it?
Clerk: Yes.
Homer: I see. And you think that people are going to pay you $4.50 even though they don't have to? Just out of the goodness of their... (laughs) Well, anything you say! Good luck, lady, you're gonna need it!

Today I want to discuss museum admission fees and determine whether the Makeup Museum would be free to visitors.  Obviously, since there are myriad factors that go into deciding such a thing, I don't know if the question will be settled today. But then, that is the whole point of MM Musings - to explore the various facets of an important issue for a would-be Makeup Museum.

Let's start with why museums shouldn't be free to visitors.  The most basic argument is that since museum outings are a form of entertainment, it's no different than charging people to see a movie or attend a sporting event.  The former director of the Met, Phillipe de Montebello, remarked, "What is it about art that shouldn't be paid for?"  Secondly, museums wouldn't be able to offer a broad range of programming and activities unless their visitors pay.  According to LACMA director Michael Govan, free museum admission "would severely limit the kinds and numbers of programs we could offer, because our budgets would be smaller. When people are paying, and it's less than a movie ticket, they are actually contributing to a museum that serves a lot of people."  Finally, a museum devoted to cosmetics is considered a niche museum, meaning that it would most likely be out of the running for financial support from the local government or foundations, and thus would need every penny that could be generated from admissions income just to cover operating expenses.

However, it's been my long-standing belief that museums should always be free.  For starters, the argument that they're like other forms of entertainment rings false - museums are more of a public service, like libraries.  Secondly, is anyone really going to be willing to pay?  An article at The Art Newspaper points out that "museums in major cities, especially those that attract tourists, by and large charge for entry. Their counterparts in areas with fewer international tourists or which rely on local visitors are more likely to be free because they need those visitors to return...Regional cities have fewer tourists to exploit and, as a result, tend to be more altruistic and community-minded. Of the museums surveyed that do not charge admission, two-thirds were in smaller cities."  Baltimore is a prime example of this: the Walters Art Museum and the Baltimore Museum of Art established free admission in 2006.  I don't think people are going to fork over any money to visit the Makeup Museum when they could see world-renowned art for free at other museums in the city.

Third, it's actually not as financially essential for a museum to charge admission as one would think.  A 2006 New York Times article reports that "according to the Association of Art Museum Directors, museums earn an average of 5 percent of their revenue from admissions." And Art Info states that in 2010, only 3% of LACMA's budget came from admissions fees.  One may argue, while it's a small percentage, where are you going to make up the money gained from admissions if you make it free?  The New York Times article adds that "eliminating admission fees can attract new community support. When the Contemporary Arts Museum in Houston stopped charging admission in 1995, public donations increased enough to make up for the loss of income."  The L.A. Times notes that here in Baltimore after the Walters went free, the "income loss was made up from a combination of public funds, private philanthropy and increased memberships from newly engaged locals. Museum income fluctuations of 3% to 4% are so common as to be insignificant; it makes sense to seize control of the one fluctuation tied to visitors, because they matter most."  Additionally, contrary to popular belief, free admission does not mean an automatic decrease in museum membership either.

Lastly, there's the issue of accessibility, which is why I have unequivocally believed that museums should be free.  Says Timothy Potts, director of the Getty Museum in L.A., "In my mind there's no question that even a relatively small entry charge is a major hurdle for many people. The ones you most want to come, for whom that $6 is really quite a significant amount, they're the ones you lose. The people who can afford to collect, have an art history degree, go to museums around the world -- they can still afford it, they can still come. It's the people who haven't had all those benefits, but you really want to open their eyes to what an art museum represents, and they're the ones you lose by charging even a relatively small amount."  An example of this is the recent price slash for low-income families at the Boston Children's Museum, which significantly dropped the cost of visiting after current discounts still weren't getting low-income families into the museum.  Free admission works:  in the six months after the Walters implemented free admission, attendance increased almost 40%, of which half were first-time visitors.  This spike held steady for almost four years, and what's more is that nonwhite attendance has tripled.  I think every museum professional wants their museum to be accessible to everyone, especially those populations that wouldn't normally be able to afford the entry free.  The bottom line is that without free admission, museums could easily turn into "social halls for the well-off" (case in point:  the recent ejecting of a poor family at the Musée d'Orsay).  And I certainly wouldn't want the Makeup Museum to end up that way!

In looking at all these arguments, I think that while it would be difficult to fund the Makeup Museum initially, I'd have to have free admission, even for special exhibitions.  Not only because it seems like the right thing to do and I want as many people as possible to visit, but also because I think it would be sustainable.  The beauty industry makes literally billions of dollars a year - surely one of these gigantic companies would be willing to sponsor a museum centered on cosmetics, especially when their own products would be so prominently displayed.  I think I may still have a little "suggested donation" box, however - if for no other reason than to satisfy my own curiosity as to whether people would actually give money.

If you were to visit the Makeup Museum, would you expect it to be free?