While I was researching ads for a special exhibition (coming in February!) I noticed a theme common in vintage beauty ads - fruit.  Fruit is an obvious and appealing choice for makeup shade names, and fruit-flavored or scented items aren't new, as these ads from 1964 and 1971 demonstrate: 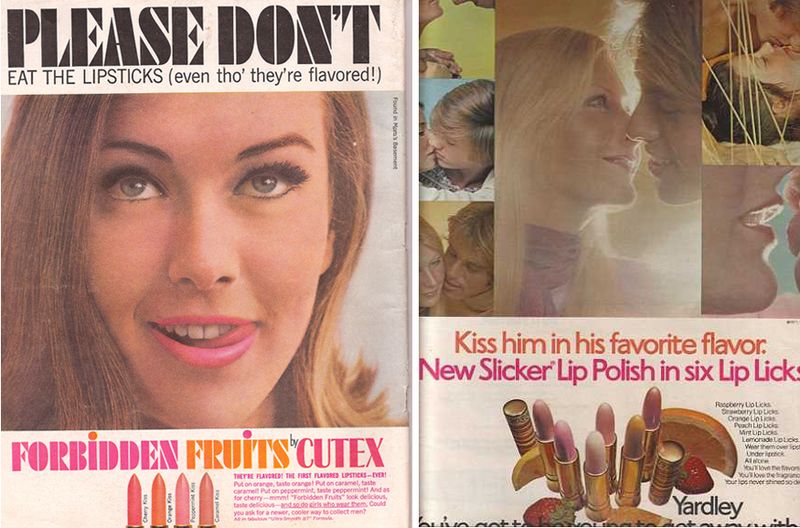 (images from Found in Mom's Basement and vintageadbrowser.com)

And they're still popular today (see Stila's lip glazes and Lancome's Juicy Tubes, for starters).  However, vintage ads featuring "nature's candy" are fairly different than contemporary ones in that they actually depict the fruit itself, making the connection between fruit and makeup much more literal.

Let's take a fruit-filled trip back in time!  (You can click to enlarge most of these images, and you really should - the copy is priceless.)

I like the graphics in this 1964 ad for Estée Lauder's Swiss Strawberry lipstick. 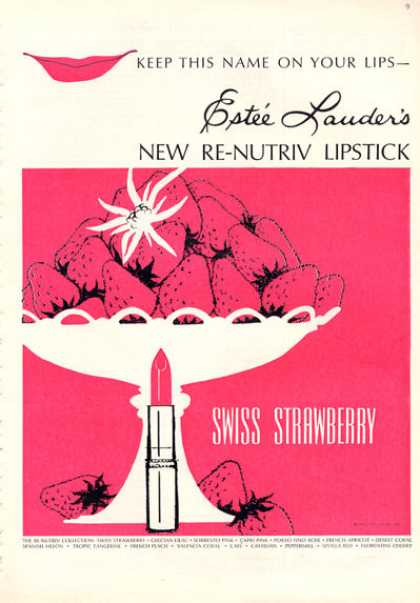 But my favorite strawberry beauty ads appeared earlier, in 1958. I don't know why, but the phrase "Hot Strawberry" cracks me up.  Cutex designed two versions of the ad for their matching lipstick and nail polish. 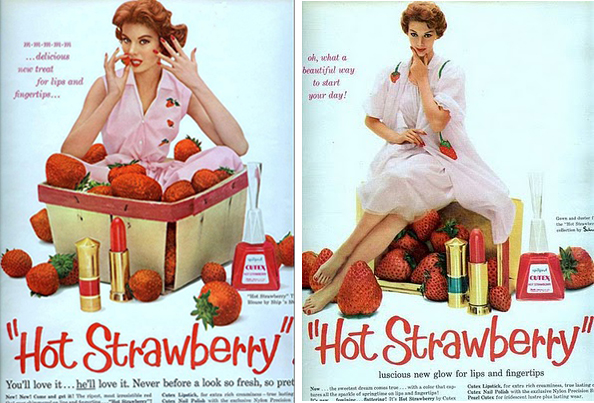 (images from flickr.com and alizarine.se)

As we'll see, Revlon led the way in naming products after fruit, and launched extensive campaigns to coincide with them.  Here are two ads for Cherries in the Snow, a color introduced in 1952 and that is still around today, and one for Cherries a la Mode (1955). 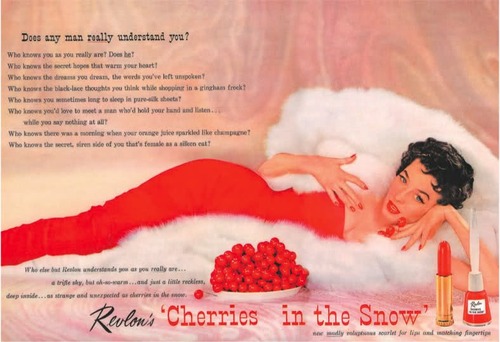 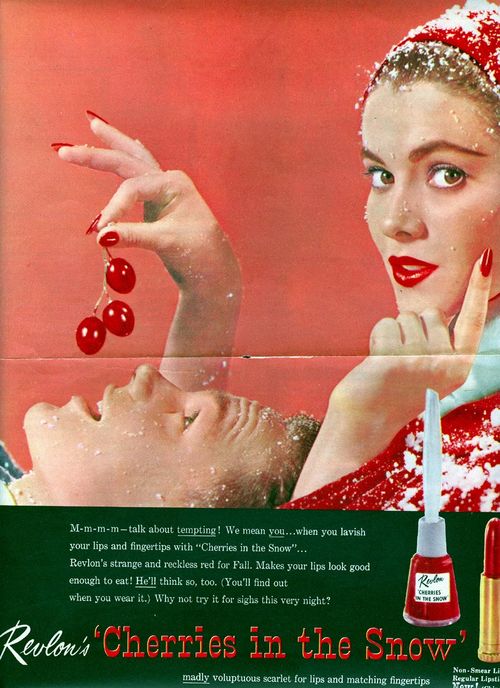 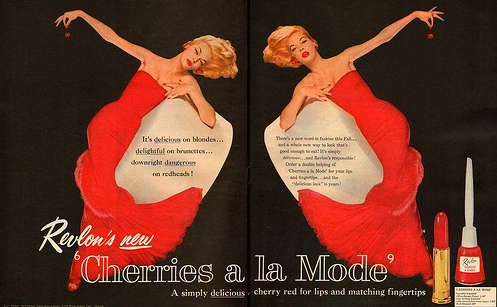 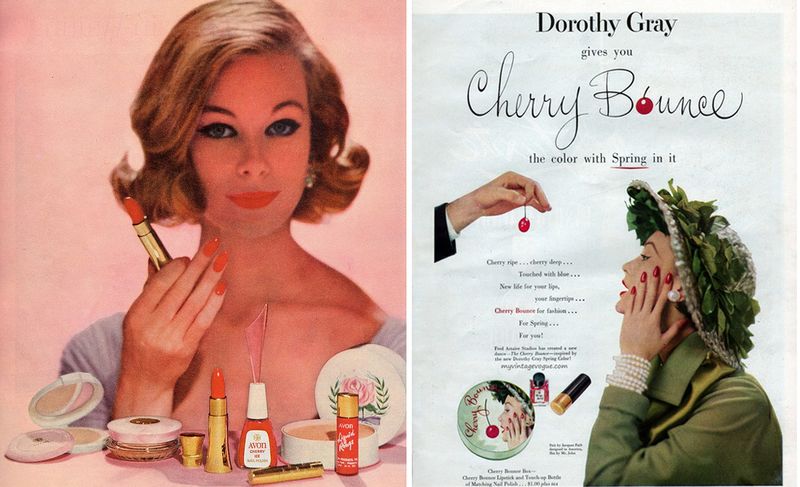 (images from flickr.com and myvintagevogue.tumblr.com)

Prior to Cherries in the Snow, in 1945 Revlon released a collection called Fatal Apple, which supposedly gave one the "look of Eve". 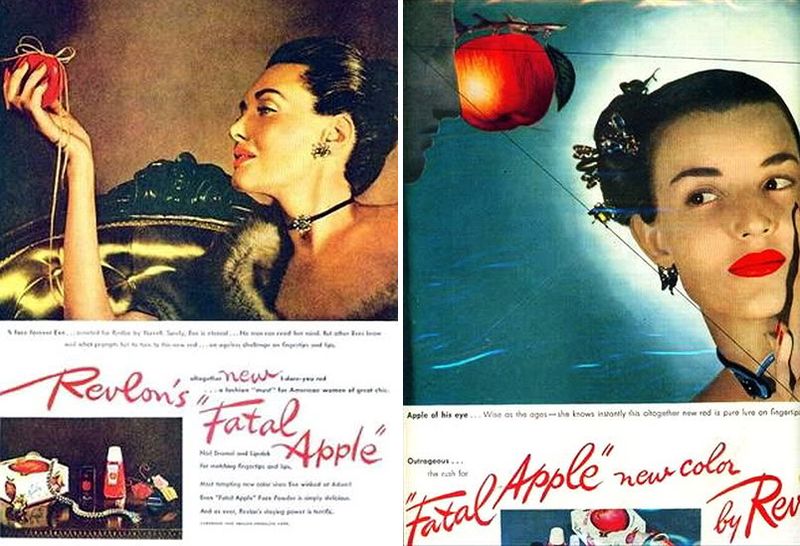 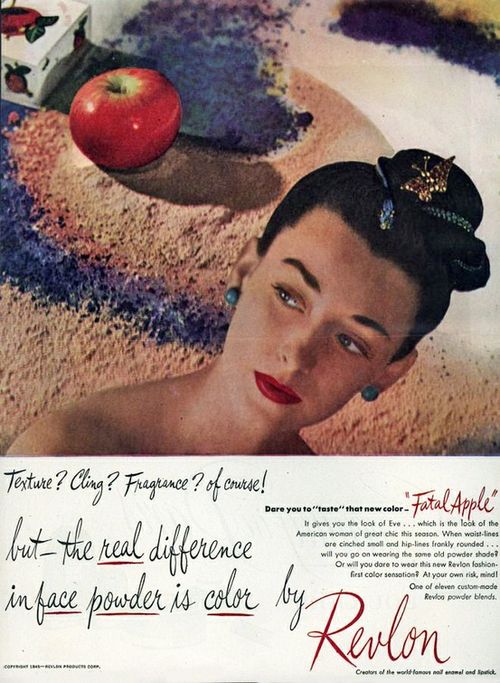 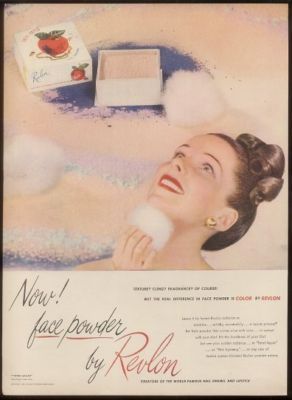 Apples remained popular, as these ads from Dorothy Gray (1958) and Yardley (197os) show. 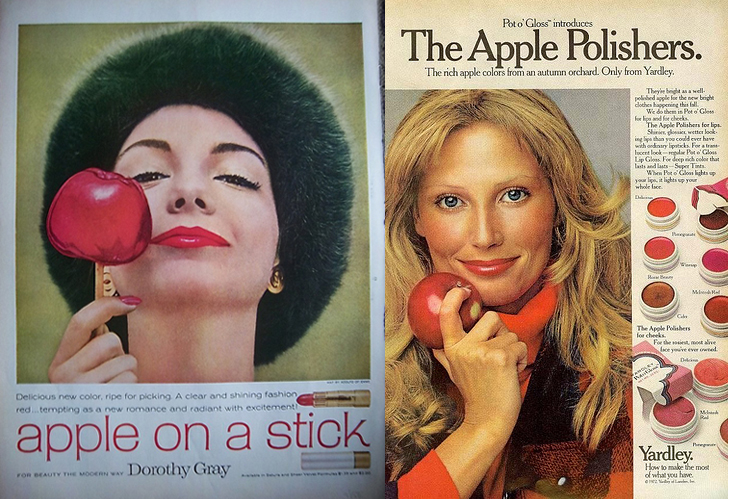 (images from ebay.com and beautyplane.com)

Other fruit-tastic advertising hit up citrus fruit with Revlon's Orange Sherbet from 1959 and Max Factor's California Orange from 1961... 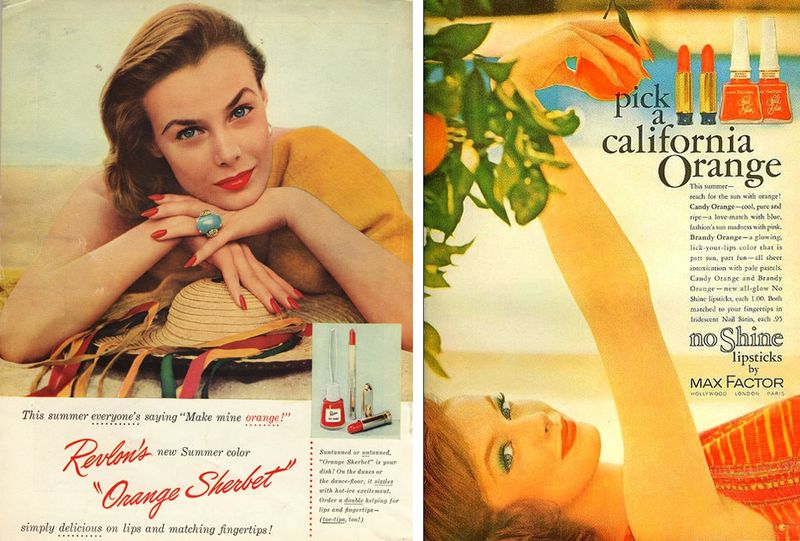 (images from blog.lulusvintage.com and flickr.com) 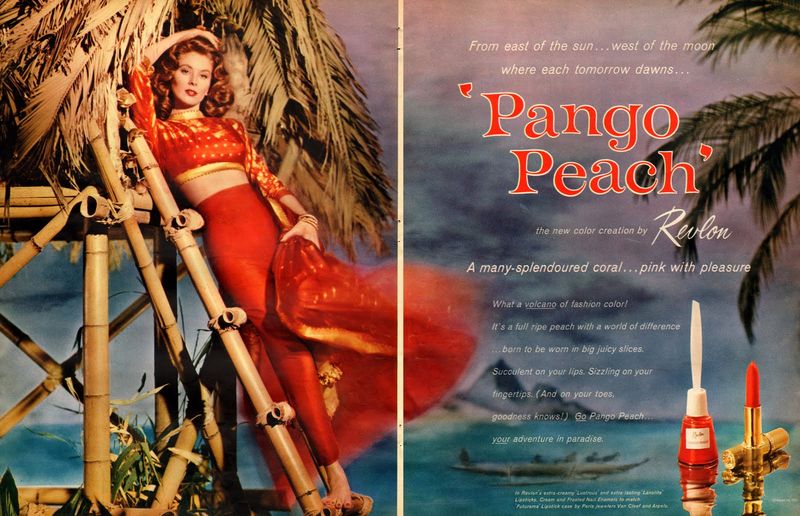 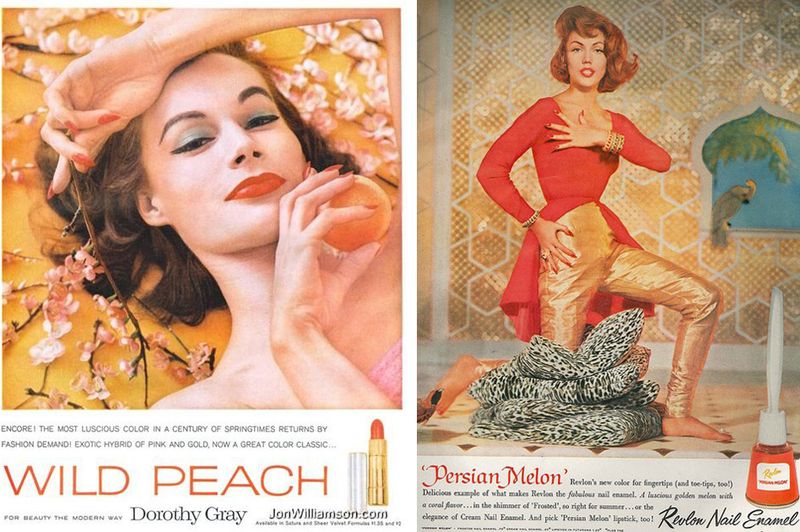 (images from jonwilliamson.com and flickr.com)

And even tomatoes!  Check out the German and French Canadian versions of this ad too. 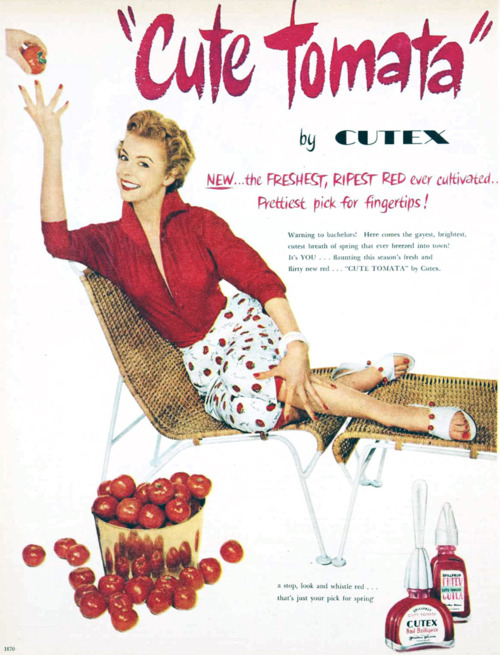 Sometimes fruit made it into an ad even though the product advertised was not at all related to fruit, as in these examples from Cover Girl (1976)  and Max Factor (1962): 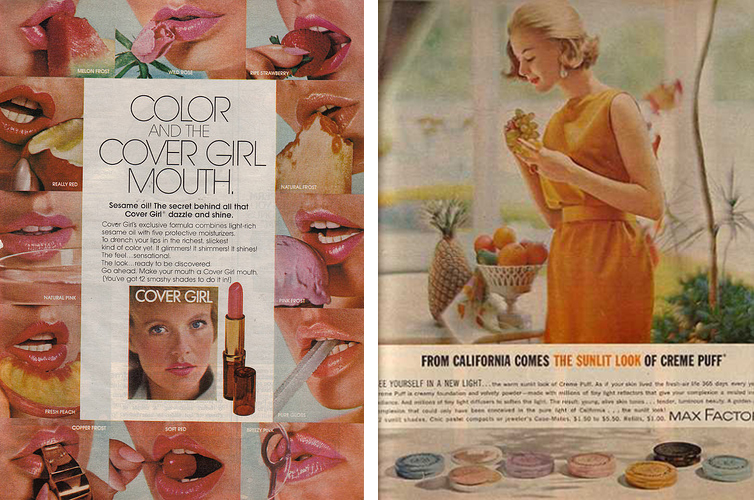 (images from flickriver.com and ebay.com)

Now let's take a peek at the comparatively tiny amount of fruit-based contemporary ads.  Here's a Japanese one for Stila lip glazes, circa 2009 (from the Museum's collection). 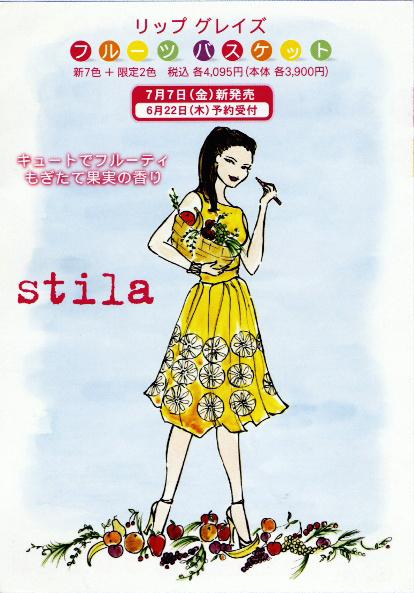 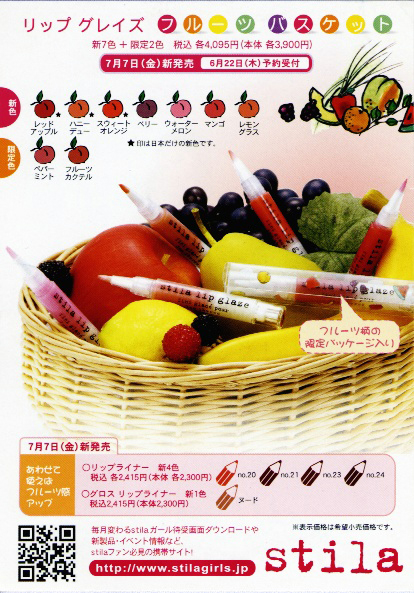 As for Lancome's fruit-scented and named Juicy Tube lip glosses, I believe this is the only ad for them that depicts fruit itself, for their limited edition "Juicy Mood" line. 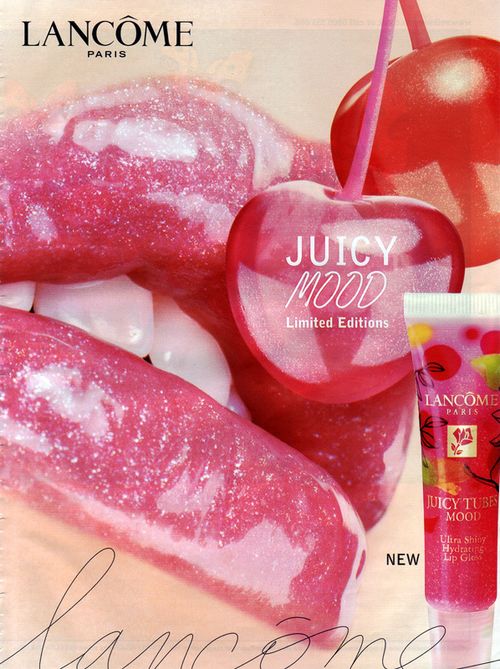 And only one for their Juicy Wear collection. 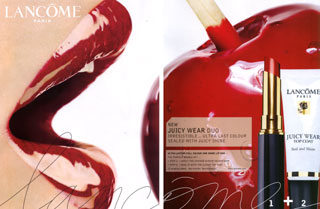 Ads for Clinique's Lip Smoothies, circa 2010: 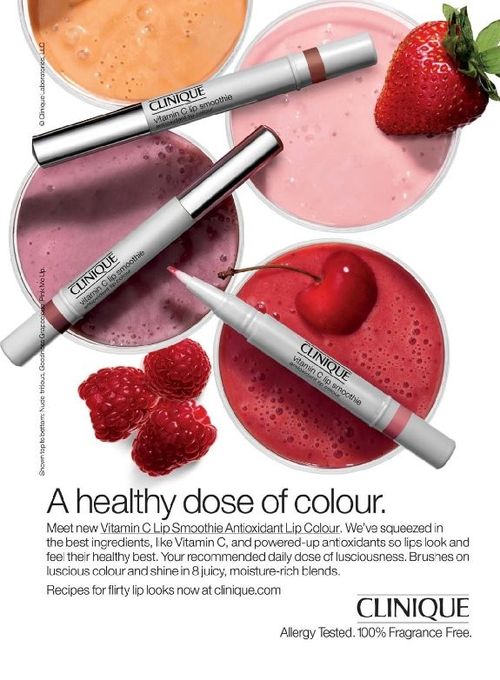 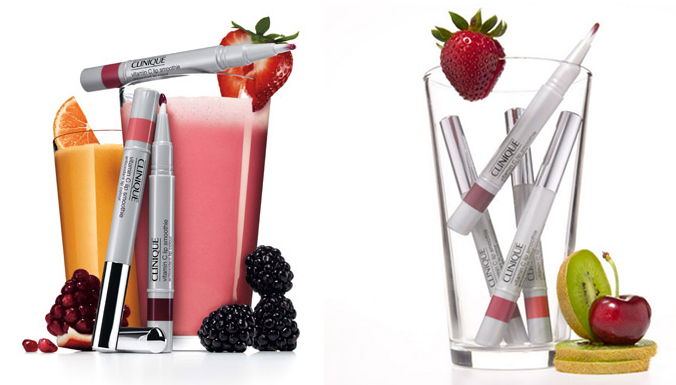 Lastly, there was MAC's 2008 Cult of Cherry collection. 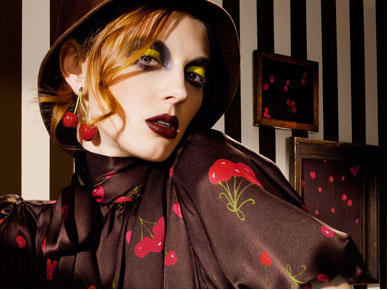 The underlying message in these contemporary ads is also pretty different than that of their predecessors.  With the exception of MAC's Cult of Cherry, all of them convey a sense of freshness and light, whereas most of the vintage ads have a decidedly darker, more provocative bend.  "Who knows about the black-lace thoughts you think while shopping in a gingham frock?" Revlon's Cherries in the Snow ad asks, while others describe their colors as "luscious," "tempting," "madly voluptuous."  Also, compare the close-ups of the women's mouths used in the 1976 Cover Girl ad to those used in the Lancome ads.  Both reduce the model to just a pair of lips, but the Cover Girl one seems much more sexualized. Even the names - "Hot Strawberry", "Wild Peach", Forbidden Fruit" and "Fatal Apple" - have a fairly risqué tone, while most of today's are simply named after fruit (the raciest name in the Lancome Juicy Tube lineup is "Suggestive Strawberry".  Oooh.)  I'm guessing the difference stems from the idea that back then, women were supposed to use makeup with the primary purpose of landing a man.  "He'll love it" claims both the Cutex Hot Strawbery and Revlon Cherries in the Snow ads.  Yardly encourages the consumer to "kiss him in his favorite flavor".  Cutex's Cute Tomata is described as a "stop, look and whistle" red.  Today, companies are smart enough to leave the man out of the advertising equation - trying to sell the idea that women should enjoy wearing makeup only for themselves.  Fruity makeup is nothing more than a yummy way to put on your face, and can even have health benefits (in the case of Clinique).

I hope you've enjoyed this thorough round-up of fruit in beauty advertising.  Something I always wonder about in looking at vintage ads is whether today's ads will seem as amusing to future generations as the ones from the 20th century are to us now.  Which one is your favorite?  I'm going with Hot Strawberry - I'm still giggling as I type it!

Posted at 11:14 AM in Advertising, Vintage | Permalink | 0 comments