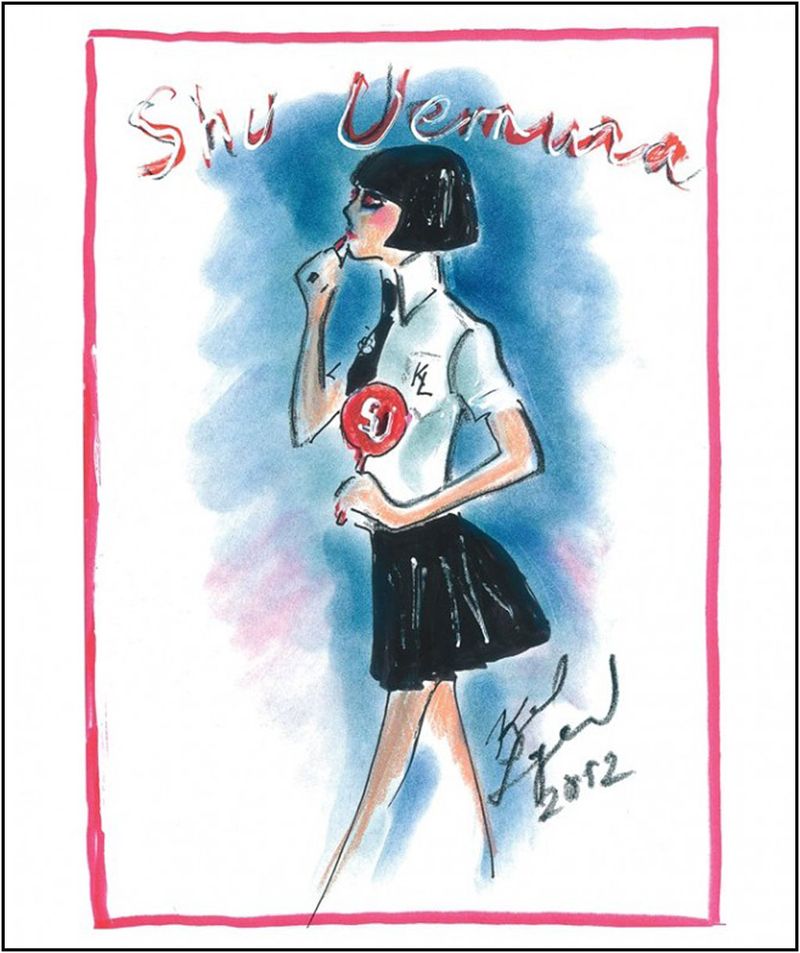 It shouldn't really come as a shock to anyone that Chanel's creative director Karl Lagerfeld uses high-end makeup for his sketches - you couldn't honestly picture him using plain pencils, right?  Lagerfeld has long been a fan of Shu Uemura (shown below in 2006) and prefers Shu for sketching because "other manufacturers do not offer such beautiful colours." 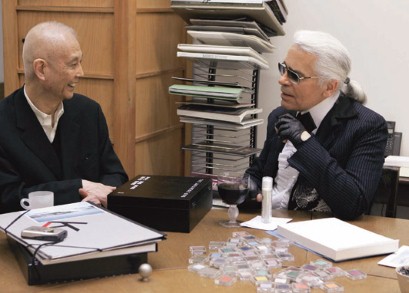 It's an odd statement considering Chanel has its own makeup line, but leave it up to Karl to go rogue.  This year, the designer collaborated with Shu (specifically, artistic director Kakuyasu Uchiide) to create a holiday collection that pays tribute to Mr. Uemura. I'll get to the makeup in a second, but I want to talk about the collection's icon, the Mon Shu girl.  Devised as a play on "mon chou", the Mon Shu girl is Lagerfeld's take on an anime character.  Says Uchiide, "Mon shu girl wears the iconic style of Karl Lagerfeld, white shirt and black tie, and a very oriental hairstyle and makeup—just like him. It is the red that Karl Lagerfeld likes—the iconic color of shu uemura as well as Japanese culture. Mon shu girl has red eyes, a tint of ironic expression; mischievous and daring. It truly reflects his own personal vision of a Japanese manga character. It’s about the mood, spirit and inspiration."

On how she was born, the website says, "Once upon a time, while the town was being decorated for Christmas with ornaments, a small miracle took place in the atelier of Karl Lagerfeld's castle.  Mon Shu girl escaped from his sketchbook - a 'dessin' come to life!  Spreading colorful times and holiday sparkle to girls around the world, Mon Shu girl dons Karl Lagerfeld's iconic look and awakens the sleeping beauty that lies deep within.  This holiday season, Shu Uemura and Karl Lagerfeld send a miracle of color and beauty that is a gift for every girl."

The company even made a little video showing her creation.

You can also get to know her in this exclusive interview at Beautezine.   While I appreciate what Lagerfeld was trying to do, to me the Mon Shu girl looks like a possessed Dora the Explorer (and I'm not the only one who thinks so).  Still, it was a nice idea to have a mascot of sorts.

Now on to the makeup.  I got the bag as a gift with purchase from the Shu website. 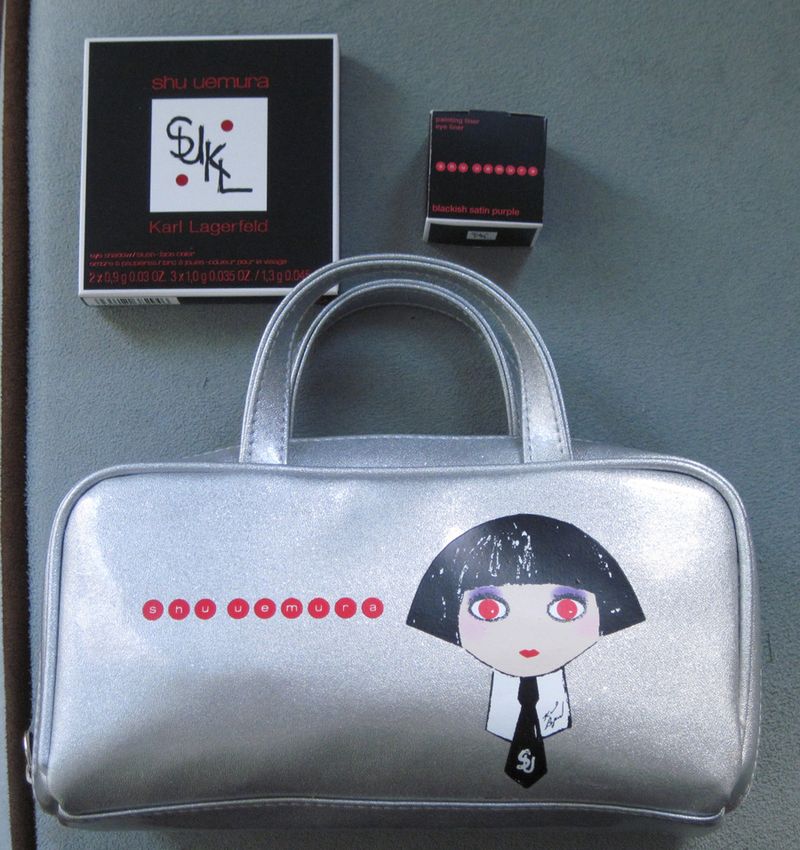 The outer packaging, I think, is quite sleek and Japanese-looking.  The red dots are reminiscent of Japan's flag, while the initials of Shu and Karl resemble traditional Asian calligraphy brush strokes. 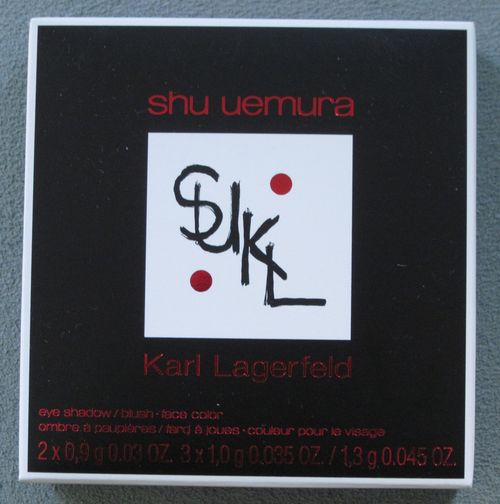 The pattern on the inside of the box is a nice touch. 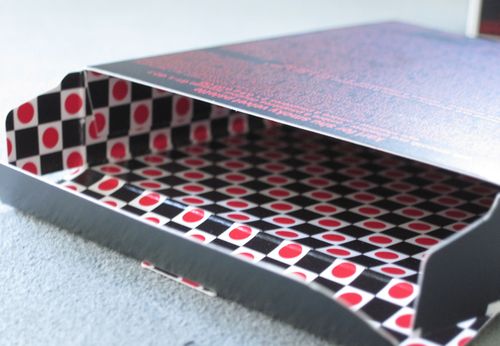 I ordered the Smoky Velvet palette. 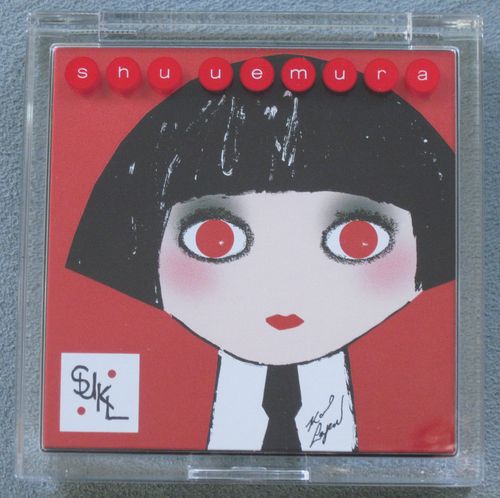 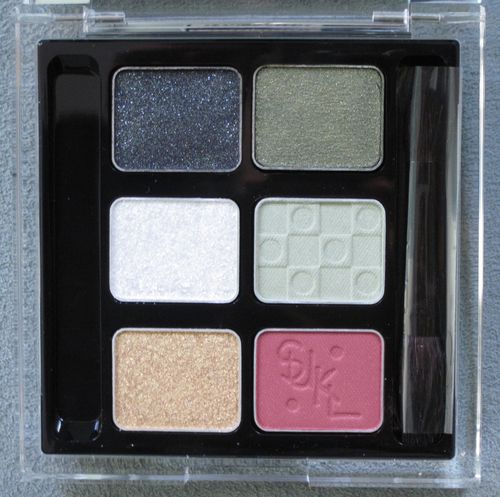 The mirror features the silhouette of the Mon Shu girl. 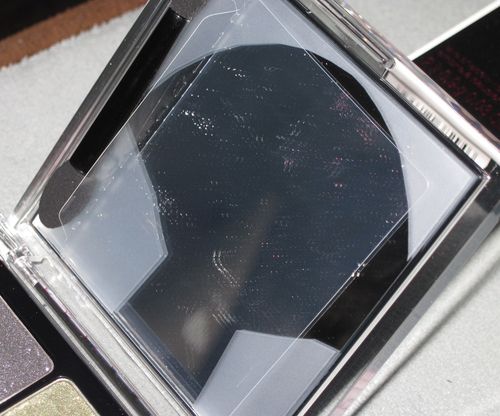 I also picked up the gel eye liner. 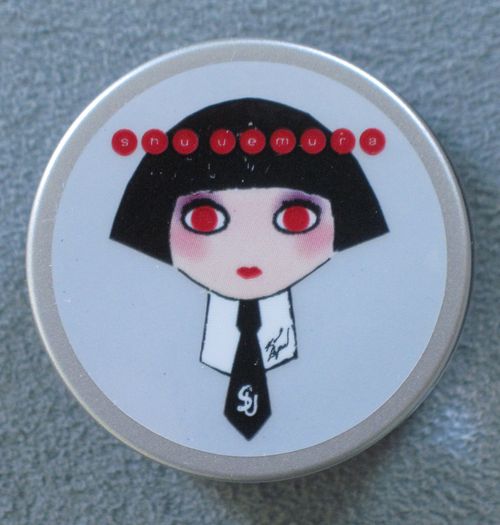 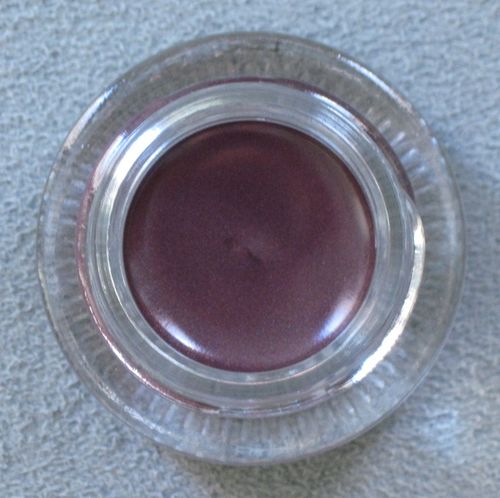 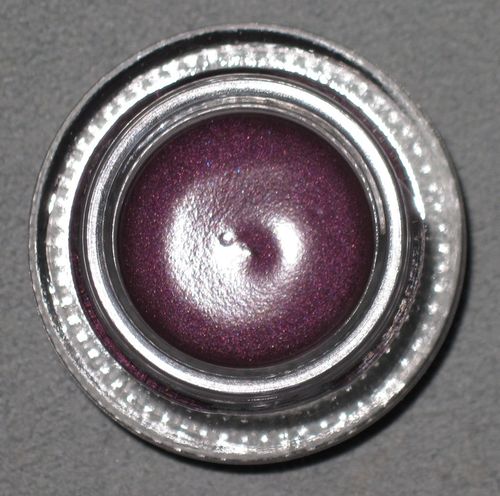 But my favorite piece is the shiny silver bag that I got for free! 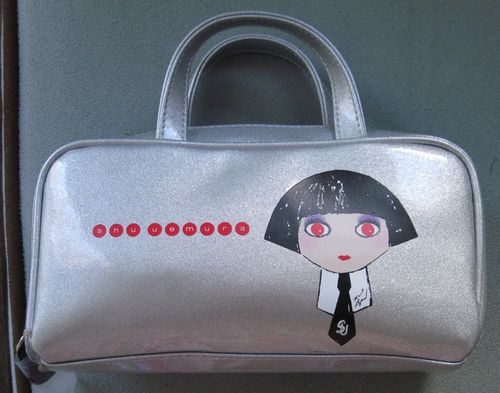 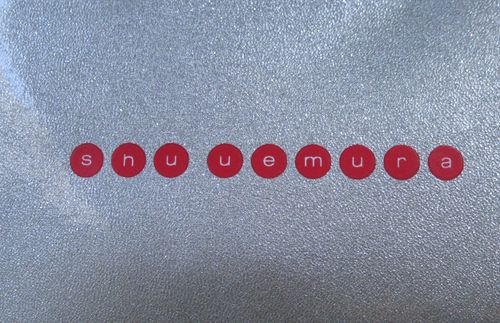 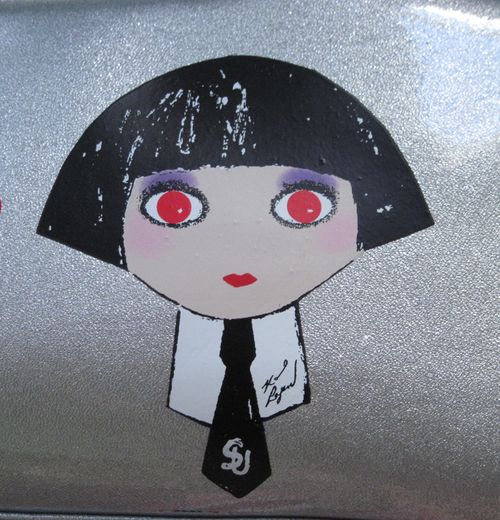 There were, of course, other items that I did not purchase, including an eyelash curler with a Mon Girl charm: 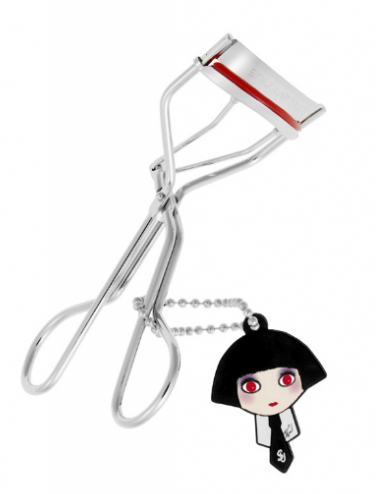 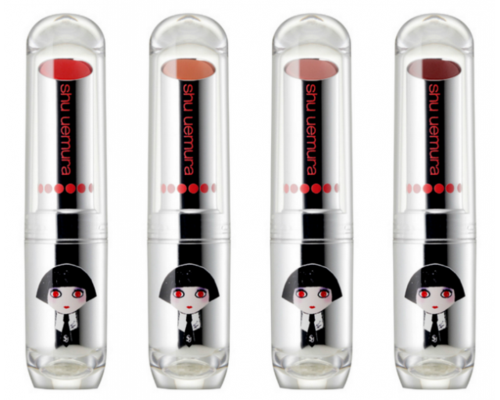 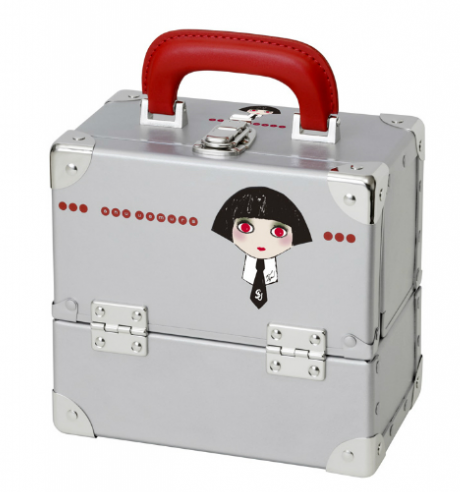 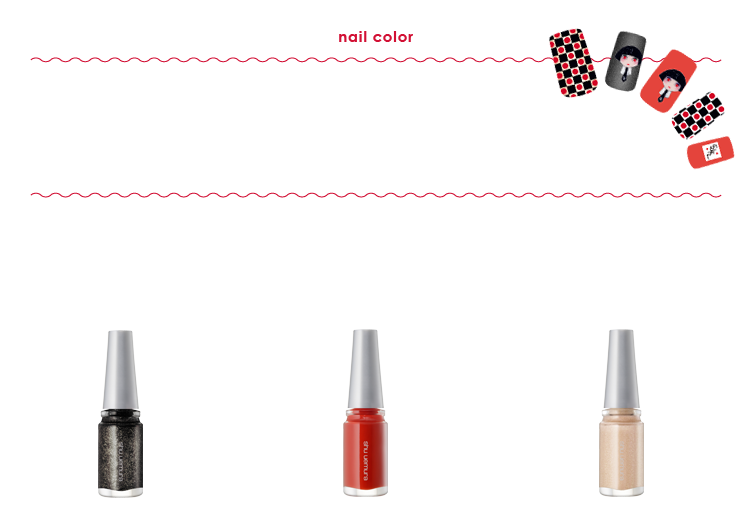 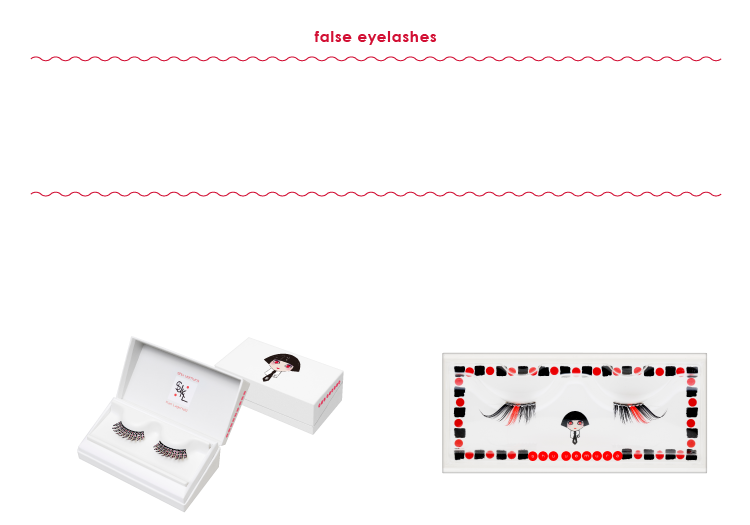 The items I really wanted most, however, were not available in the U.S.  I have searched E-bay with no luck.  These include the UV Base Undermousse:

Cleansing oil (I think I have all but one limited-edition cleansing oil Shu has released and I'm so sad I haven't been able to get this one!)

And finally, the Mon Shu girl plush doll.  I think this was only available as a gift with purchase or given for free at press events.  Sigh. 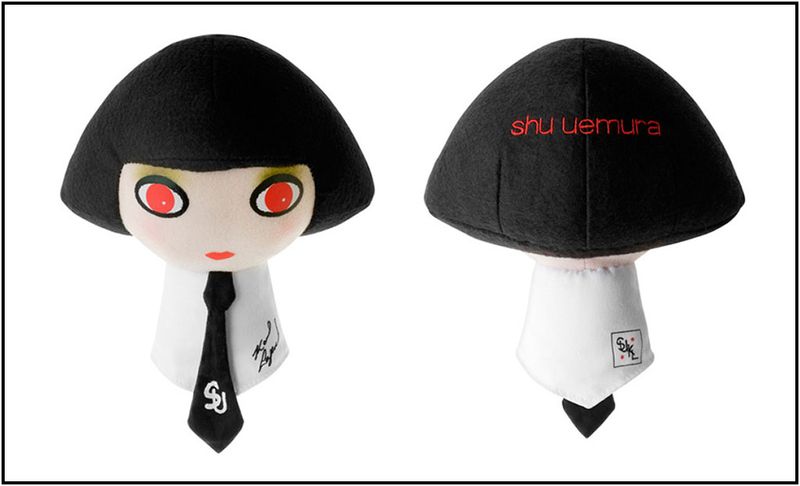 Speaking of which, the press events look crazily fun!  Here is the Paris launch of the collection. 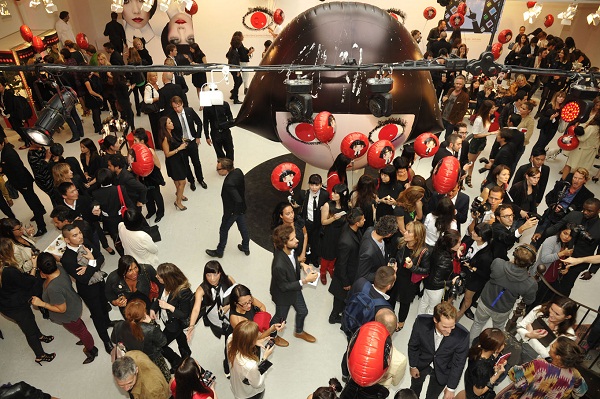 You could win your own Mon Shu girl doll. 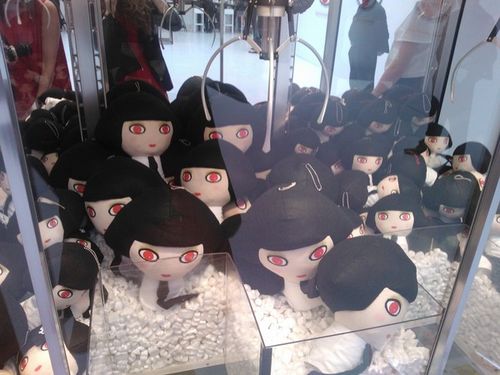 I'm looking at all these dolls and thinking that somewhere someone has to have one just sitting there, uncared for and neglected.  As a collector, it drives me crazy I don't have access to such exclusive items.

Anyway, what do you think of the collection?   Does the Mon Shu girl creep you out?  I'm not the biggest fan, but I think she's cute.  And it's better that Karl came up with a character rather than using his own likeness (see the collaboration he did with Sephora).