Highlights from the Shiseido Corporate Museum

Here's another museum to which I must make make a pilgrimage!  In lieu of actually visiting, I've selected a few highlights from their collections.  (Sorry the pictures are so small - not sure why they have such teeny pics).

Here is one of the original bottles of their best-selling skin treatment Euderline from 1897, along with a bottle of their camellia perfume from 1917.  "The name Euderline was also novel for the time, taken from Greek words meaning 'good' (eu) and 'skin' (derma). The 'red wine' appearance of the lotion earned it the nickname 'Shiseido red water' among users."

Rainbow Face Color Powders (1917) were cutting-edge for their time, while the design on the box of the Modern Face Color Powders (1932) is a good representation of both fashionable young city ladies and the company's pre-war aesthetic.  The Rainbow powders were among the first face powders to come in colors other than white, including yellow, rose, green and purple, to allow women to match their powder to their clothing.  The Modern Face Color Powder box was designed by Yamana Ayao, and shows "a beautiful harmony of Art Nouveau and Art Deco elements."

We also have some lovely ads, reproductions of which were used in Shiseido's exhibition at the Palais de Tokyo earlier this year.

The one on the left was desgined by Yabe Sue in 1925 and perfectly represents the Art Nouveau style, and the one on the right is from 1930 and depicts two women, one clad in an elaborate 18th-century French-looking frock and the other in a traditional Japanese kimono.  The meaning is unclear - is there a rivalry going on between East and West or is Shiseido showing their attempt to bridge the gap between their customers living in those two spheres?

These next two are from 1938 and 1961.  The earlier one, designed by Yamamoto Takeo, looks vaguely surreal to me with the woman's profile seemingly floating amongst Magritte-esque clouds.  But according to the website, "the poster is from the period around the 1930s when Shiseido's chain stores began using display windows. The Shiseido designers from this period were successful in creating images of feminine beauty that anticipated the changing times, and contributed greatly to bolstering the Shiseido image.  The later one was designed by Mizuno Takashi and is from the company's first "campaign-style promotion" for a new line called Candy Tone.

Some other highlights of the permanent collection include an entire wall showing the evolution of the brand's packaging:

And a display showing how the typeface and camellia logos also changed over time: 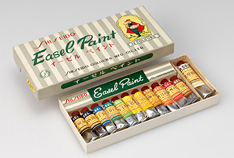 Something else that I love about this museum (and something that I try to do with the Makeup Museum) is the launching of special exhibitions.  In 2009 the museum showed "The Pleasures of Colors:  Shiseido Paint Sets" which looked at the crayons, paints and other art implements the company produced for a brief period in the late 1950s.  But these weren't makeup items aimed at women - these were art sets intended for children in order to introduce them to drawing and painting.  "These included a string of ground-breaking new products that helped to guide Japan's new art education, and many featured charming packaging that encouraged children to try their hands at pictorial art. This exhibition highlights how well these colors have retained their bright appeal over time, and explores how they contributed to a next generation of education in Japan." 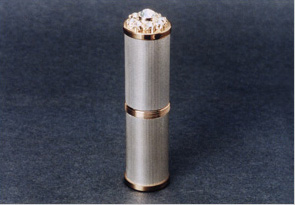 The current special exhibition is devoted to lipstick called "The Excitement of Lipstick:  Color, Form, Spirit."  Here's the description from the website:  "Lipstick can be considered the most striking and important element of women's makeup. Even just a little bit of lip coloring can lend an “adult” sophistication to the face of a child, bring an air of specialness to an otherwise ordinary day, give rise to numerous and various female expressions, and even embolden the spirit.  This exhibition, with its display spaces reminiscent of show windows, presents these appealing aspects of lipstick in various visual and entertaining ways.

The exhibition is organized around three themes—Lipstick Colors, Lipstick Shapes, and Lipstick & Spirit—and will focus on the beauty of lipstick itself while exploring some of the unseen relationships women have with this essential of the makeup kit. It will also include some hands-on displays where visitors can explore the enjoyment of lipstick experientially, including a corner for trying on various lipstick shades and computerized tablet stations where visitors can simulate applying their own makeup."  (Note to self:  steal this idea.)

I desperately want to go!  What say you?