Saturday was the Baltimore Running Festival!  For the 2011 festival, I wrote, "Come hell or high water, I'll be running the 2012 Baltimore marathon!  Fingers crossed my body cooperates and the injury doesn't flare up too badly again (it's still not even completely healed), and that something else doesn't start hurting."  Well, unfortunately, back in May my knees started acting up.  Back to physical therapy and doing exercises to help my knees.  While I can still run through the pain, something I couldn't do with my previous injury, I figured it wasn't the best time to start marathon training.  Additionally, I wasn't able to devote the time to developing a training plan due to a major career issue, which also occurred in May and is just now being resolved*.   So I had to scrap my hopes of running the 2012 Baltimore Marathon and settle for the half.  I was disappointed, but maybe 2013 will finally be my year!

It is a nightmare getting there and back, but luckily we live close enough to walk both to and from the race.  We got a gorgeous day for it - sunny and chilly. 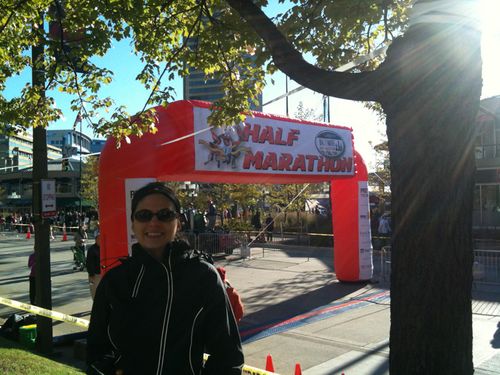 I am, once again, in head to toe Lululemon.  They really need to start giving me free stuff.

It was getting very close to start time, so I peeled off my jacket.  When we still weren't moving after 10 minutes after the start time, I began whining and pouting.  I get extremely anxious before races (once I get going I'm fine.)  I REALLY needed the race to start so I didn't get too panicky and end up chickening out.

My husband commanded me to stop pouting and start smiling because we would be starting any minute.  I obliged.

And we did start, hooray!  As we walked towards the start I saw some great signs. 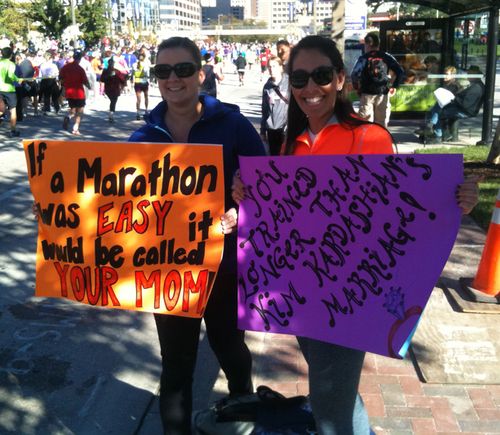 Unfortunately I don't have any pics of the actual course (I run way too slow to take pictures along the way) or the finish - my husband had gone home while I was running and didn't make it back to the finish line in time to see me cross it and take a picture.  Take my word for it, it was a nice, fairly easy course with literally thousands of people coming out to cheer you on along the way.  What I really liked was being able to run with the marathoners.  The half-marathon and full marathon course meet at mile 3 (or mile 16 of the full) so you get to run with them.  In addition to their race bib with the number, some were wearing another sign that said "full" on the back of their shirts.  The whole time I was running I kept looking at them and really hoping I would be one of the people wearing the "full" sign on my back next year. 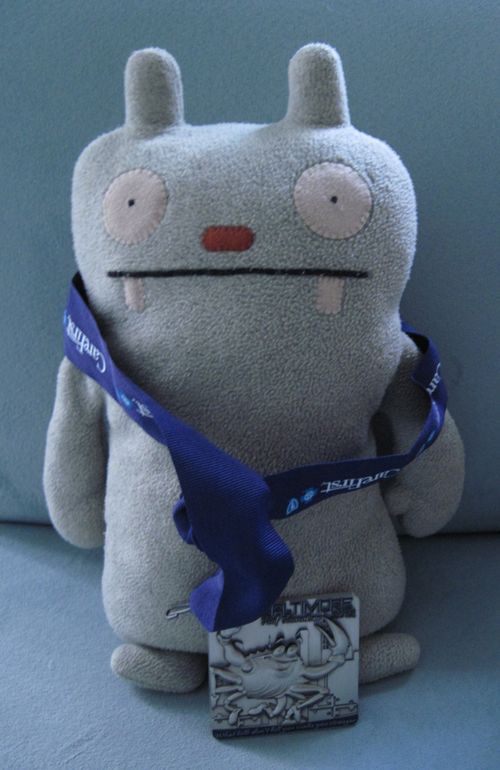 I love that silly cartoon crab!!  All in all, a great race and I would definitely run it again.

*You may have noticed that I was having trouble keeping up with my posts and remarking how crazy things were.  Now is the time to come clean - in late April my boss informed me that I, along with several other co-workers, was getting laid off.  My last day was supposed to be in mid-June, but fortunately we received enough funding to keep me on until mid-July.  Between trying to tie up loose ends at work and scrambling to find a new job, I simply had no time to devote to marathon training.  In late August I started working again - it was a temp position, but after a few weeks I was liked enough to be offered a permanent job.  :)