Here's an odd fall 2012 collection from Italian cosmetics brand Pupa.  They've borrowed from other cultures before (see their nesting doll collection) but I don't think this collection had too much thought put into it.   Called China Doll, the collection is supposed to embody "the preciousness and elegance of the Eastern world to create a new, refined neo-geisha style...four new multiplay colors in a limited edition that complete the look with delicate Oriental-chic details."  Fair enough, but traditional, genuine antique china dolls (as in glazed porcelain) were mostly made in Germany, then in the U.S. and Japan - they actually don't have anything to do with China.  Even if Pupa was referring to a china doll-like "porcelain" look that can be achieved with the products in this release, it still doesn't make a lot of sense.

What's even stranger is the star of the collection, a highlighting blush which shows a geisha (?) holding a parasol.  I don't know what is to the left of the parasol - is that her hand coming out of a robe?  A rickshaw?  Hard to tell from the picture. 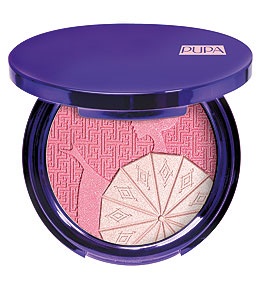 Even if Pupa was trying to do a Chinese theme, geishas originated in Japan.  The company sort of glossed over what exactly was the Asian influence in the collection description, throwing out generic, made-up words like "neo-geisha" and "Oriental-chic".

To sum up:  this is yet another case of a cosmetics company getting its cultural references wrong (see my previous post on this).

(Thanks to Beautiful With Brains for bringing this collection to my attention).

Posted at 10:38 AM in International brands | Permalink | 0 comments