You may remember that Dior released a gorgeous palette in the fall of 2010, which depicted the designer's "New Look" as sketched by Dior illustrator Rene Gruau.  The company released the same palette this fall, only with different colors.  I'm puzzled by the decision and wasn't sure whether to purchase it, as it's the same design as the 2010 version.  I eventually bought it...a collector can't resist serial numbers!

The box is the same pebbled white with the Dior name in the middle. 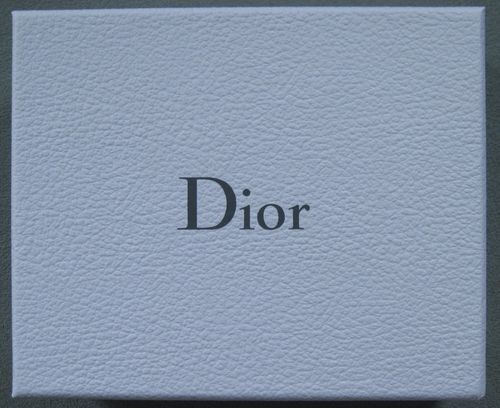 The pamphlet shows a photo of an eye shadow brush just about to dip into the palette. 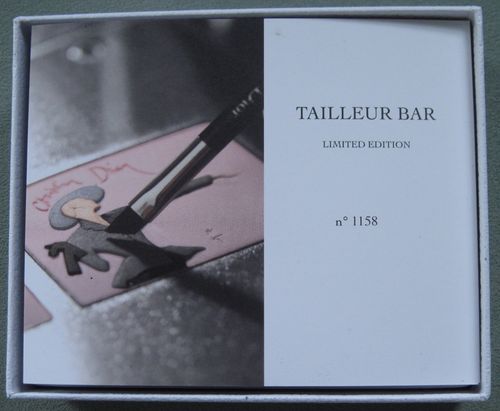 The layout is the same (image on the left, text on the right) but the photo is different for 2012.  In 2010 Gruau's original sketch was chosen for the pamphlet image. 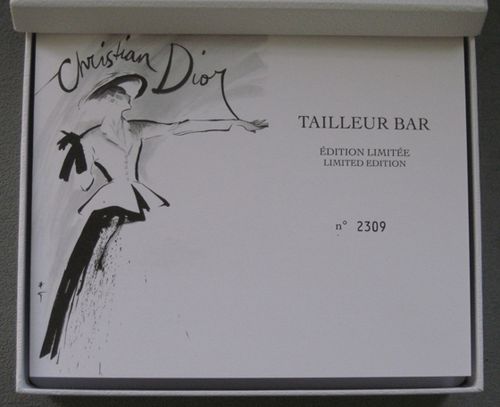 However, the 2010 pamphlet contained the description in French as well as English, where the 2012 only included English.  "February 12, 1947:  Christian Dior presents his first Haute Couture collection.  The public is amazed:  this new vision of an elegant woman, with accentuated curves and a regal posture would come to be a revolution that took the fashion world by storm.  Instantly named the 'New Look' by Carmel Snow, Editor-in-Chief of American Harper's Bazaar, the 'Tailleur Bar' (Bar Suit), perfectly embodied this new silhouette.  The jacket, with its nipped-in waist, and the twirling skirt became the absolute symbol of the Dior silhouette.  Rene Gruau, long-time associate of the Couturier, immortalized the famous Bar Suit in a sketch that captured Monsieur Dior's genius in a few cleve strokes  This legendary image is now embossed on a new Dior limited edition eyeshadow palette."

Both contained a demonstration of the looks that could be created with the palette. And the "New Look" modeled: 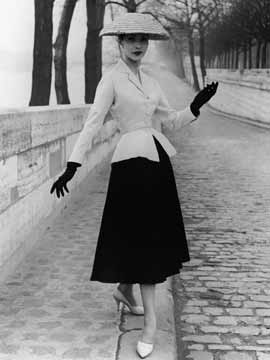 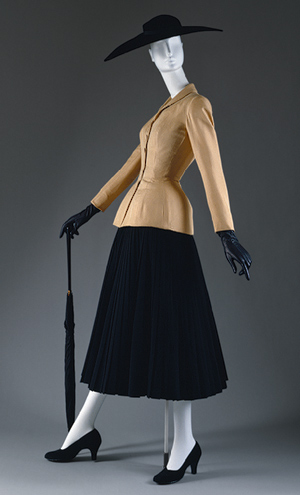 Here's a version of the jacket in grey, just like the palette (although the collar and pockets are different than the original jacket). 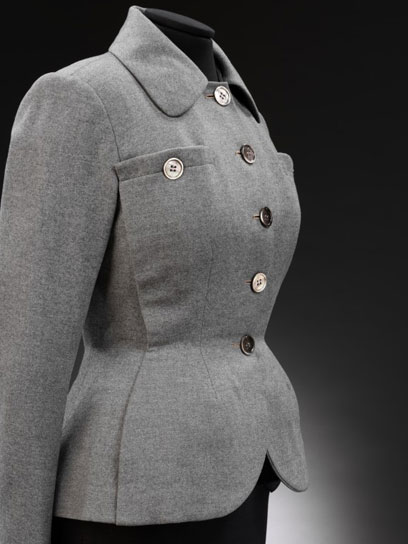 So let's get to the palette itself.  It's similarly colored to the 2010 one, but the background is pink rather than grey and the hat is light grey instead of deep blue. 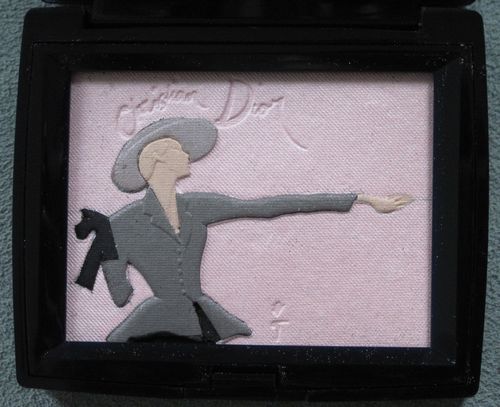 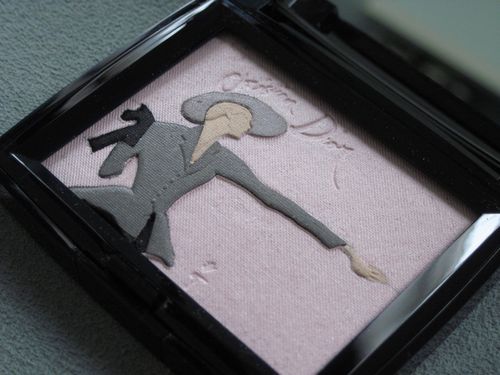 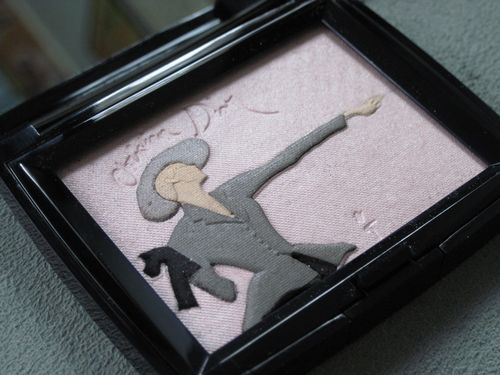 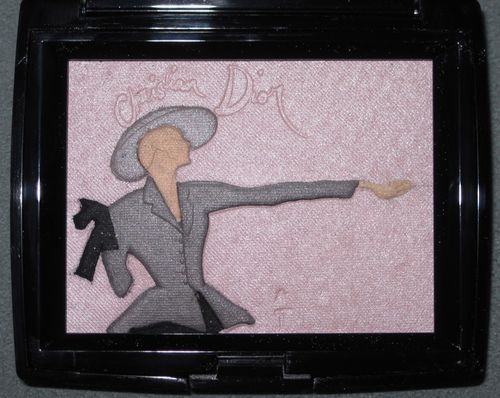 For comparison, here is the original 2010 palette: 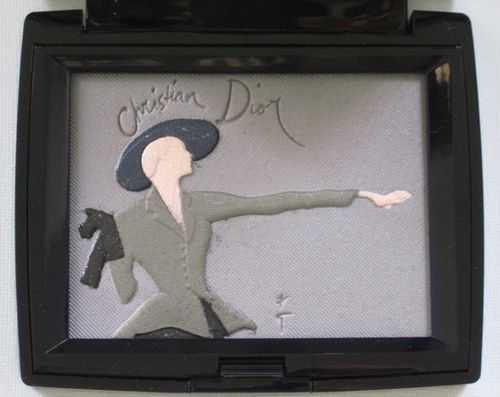 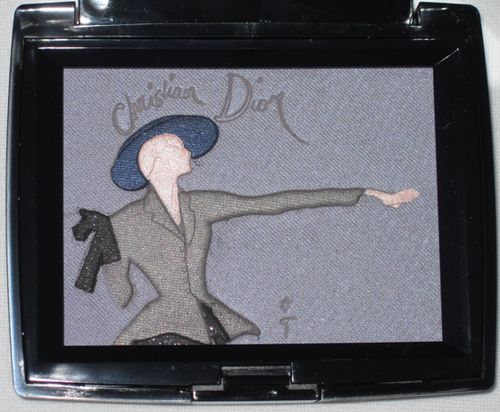 I was trying to figure out why Dior decided to recycle a palette they had done previously so I checked out their fall 2012 ready to wear show to see if a modern "New Look" figured prominently.  It was not main theme of the show, but there were some pieces with a New Look feel - fitted jackets and full skirts hitting below the knee. 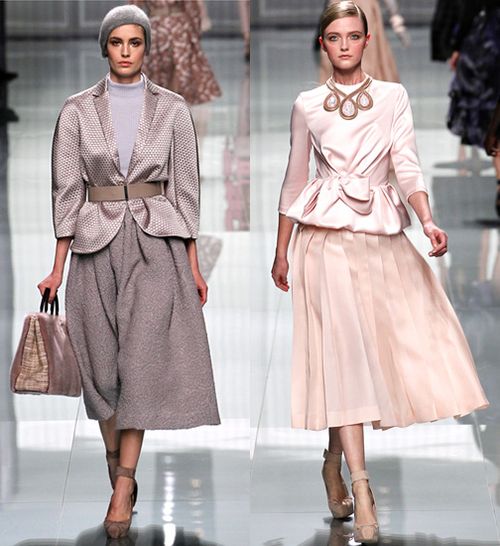 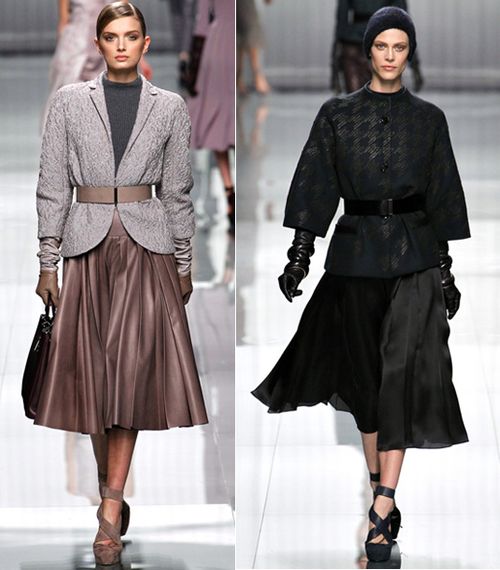 I thought these pieces were okay, but a little underwhelming.  As one critic said,  "['Soft modernity'] was a notion whose nebulosity dogged the catwalk, where deflated New Look looks simultaneously evoked Dior's stellar past and its lunar (as in moonstruck) present... it felt like Dior by the numbers...there was an intangible lifelessness to the clothes."

I have to say that this critique can be applied to the palette as well.  2010 and 2011 seemed to be golden years for Dior beauty, as the original Tailleur Bar palette, Mitzah palette, and Lady Dior palette were released - and all of them featured an original design that perfectly translated a bit of Dior history and iconic fashion into cosmetics.  This 2012 Tailleur Bar is simply a repeated design in new colors.  Disappointing, yes, but I guess if you missed out the first time around this is a decent replacement.