As we've seen with the Bengal Tiger powders, Sea Turtles palette and many other items, Chantecaille has demonstrated a commitment to preserving wildlife.  This fall, the company will donate 5% of the proceeds from their L'Éléphant palette to the David Sheldrick Wildlife Trust, an organization that "rescues, fosters and release baby elephants orphaned by ivory poaching." 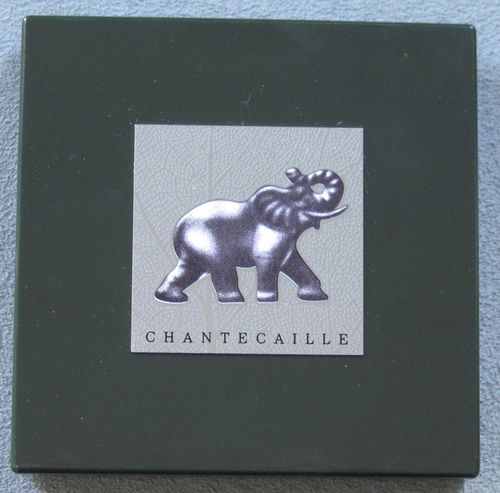 The colors are Ivory, Grasslands, Iron Ore and Red Earth and were inspired by "the trends seen on the fall runways and the lustrous colors found in the Kenyan landscape."  Eeek.  If I were talking about the fact that elephants have long been hunted for their tusks, I wouldn't celebrate it by naming one of the shades Ivory.

I also don't think it would have hurt to have some more detail on the elephants themselves.  I mean you can tell it's an elephant, but compared to the intricacy of, say, the Protected Paradise palettes, Chantecaille could  have done a little more. 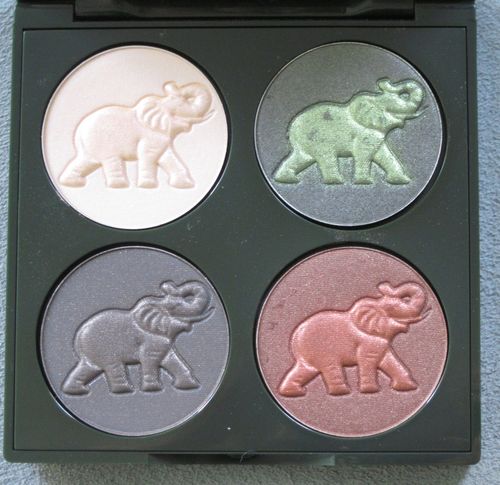 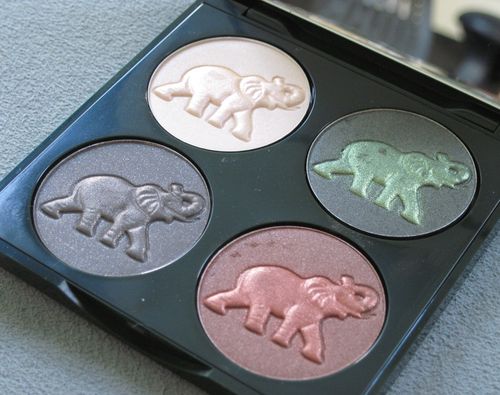 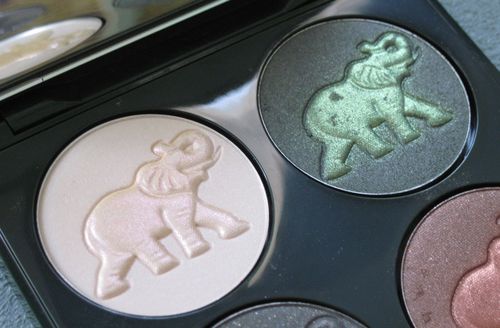 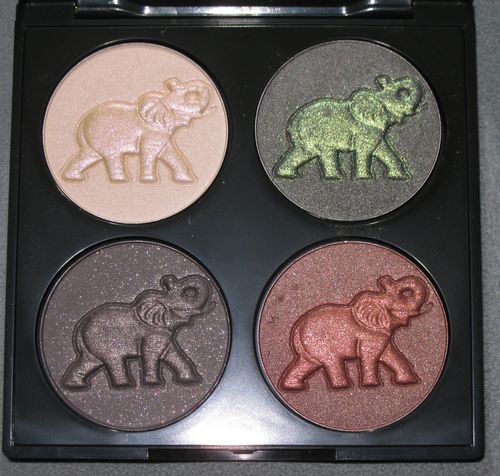 There is also the blush in Elephant Fun (5% of proceeds from this blush will also be donated): 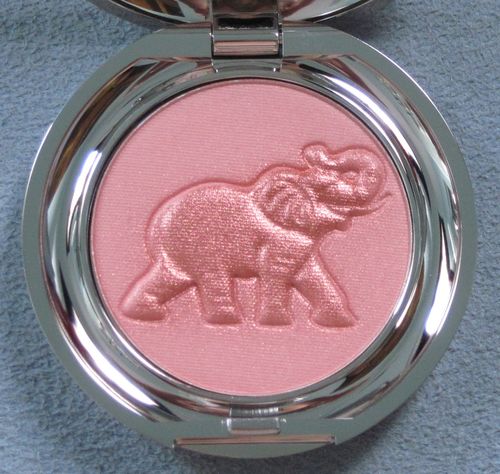 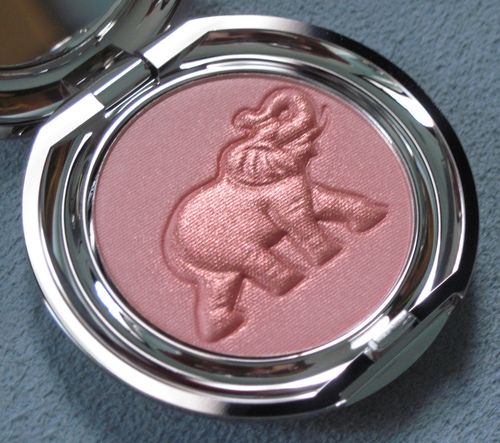 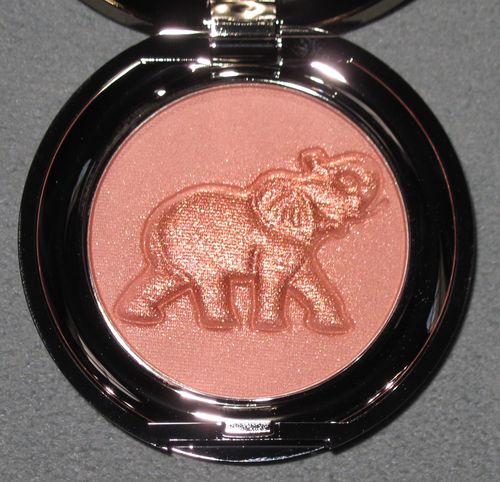 This isn't the first time elephants have appeared in makeup design.  You might remember Lancôme's Sun of India palette from fall 2008, or Guerlain's summer 2009 collection, which featured elephants on several of its products.  More recently, for its 21st anniversary Fresh released a set of three limited-editon soaps with illustrations by R. Nichols, one of which has an elephant. 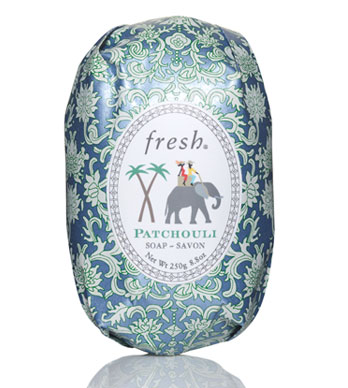 (I think I'll do a post on the soaps, as I'm branching out into collecting pretty bath and body items as well!)

Bringing attention to the plight to save the elephants as well as their environments is the focus of many contemporary artists' work.  Some of the most notable is that of South Africa-based artist Andries Botha. 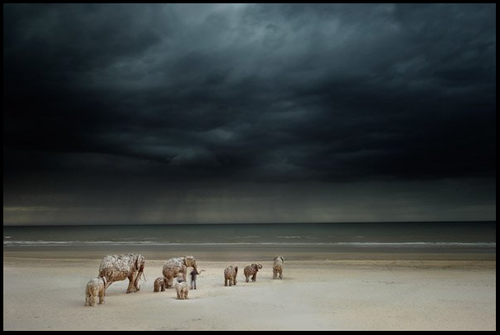 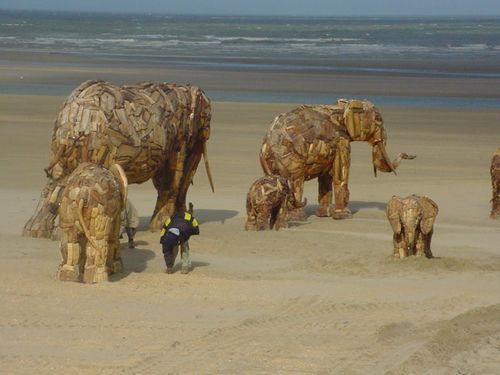 The artist's statement on this piece:  “In African mythology the elephant reincarnates carrying the soul of a murdered God. It is thus the embodiment of the transmigration of souls. It is also the metaphor for the world’s preoccupation with Africa as an exotic location. The elephant thus embodies the world’s romanticism with Africa. In part it is the Colonial panacea: wildness can be contained, civilised and taken back to the ballrooms of the First World as a trophy.”  The elephants (constructed out of driftwood) therefore remind us not only of the ugly business of ivory hunting, but the larger issue of colonialization. 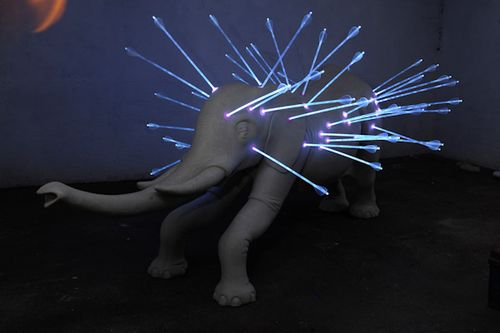 Like the earlier Wounded Elephant, on the surface this sculpture depicts the pain these animals are caused as they are hunted.  On a deeper level, Botha's work touches on the opposing themes of burgeoning life and untimely death.   It also points to the shrinking elephant population, which is the result not only of hunting but the destruction of their natural habitat.   He states:  "For some time now I have been mesmerized by embryos floating palely and ghostlike in bottles of formaldehyde hidden in back rooms of laboratories, museums and similar such dark archives.    They are forms of arrested life, hauntingly beautifully swimming eternally, having us muse about life under- realized. In December 2010 I did a long travelling pilgrimage into the more arid regions of South Africa pursuing bushmen cave paintings of elephants...in the Cedarberg mountains I found many more paintings of elephants, ironic testamonies to an abundance now no longer present...At that time the haunting image of  Andrea Mantegna's 'Martyrdom of St. Sebastian' kept floating into my sub-conscious.  I decided to shoot a number of arrows into the 'Loxodonta Africana'. The unborn elephant hunted in the womb.  A thought came to me then of illuminating the elephant from the inside and that the arrows took on the character of a type of spectral halo, transforming or recreating the dichotomy between two extremes, mortality and beauty.  It struck me in retrospect that 'Loxodonta Africana' could be interpreted as a silent protest from within the contemplative embrace of my studio...our ever expanding industrial sensibility increasingly diminishes the natural habitat of the elephant.  The very idea of living within a 21st century industrial capitalism that finds a place with enough space for the elephants to be wild and free, would be the challenge and the symbol of a humanity that begins to pay more attention to an ever depleted natural universe."

Makeup and massive sculptures are two very different ways to raise awareness of a particular issue. Botha's work is a more meaningful, poignant way of drawing attention to the problem of elephant poaching.  He is an individual person putting a lot of time and work into this cause, while Chantecaille is a cosmetics company whose charity efforts come second to its primary goal of making money.  Having said that, both are contributing to the common goal of eliminating elephant hunting (or in the case of Chantecaille, fostering orphaned baby elephants).

What do you think of the palette's design?  And of Botha's work?

(Andries Botha was brought to my attention by mymodernmet.com).