This post is so long overdue, but I figured it would be fitting to put up one last summer collection before the season unofficially ends this Labor Day weekend.  Mamechiyo, a designer of modern kimonos, collaborated with Shu Uemura to create one of the most vibrant and impressive collections ever.  I don't think I've been this excited for one of Shu's artist collaborations since Moyoco Anno's Tokyo Kamon Girls.  According to the Shu website, this collection is about "expressing a cuteness—a world rich and dazzling and overflowing with flowers, inviting you to enjoy your ultra femininity; enjoy just being a girl.  Mamechiyo used flowers in different colors and from different seasons for a continuous bloom.  She hopes this conveys the strength and positive energy of life...mamechiyo's world is one that is free and infinite, depending on your creativity; your world will spread from the past to the present and into the future bringing a life full of dreams and the spirit of contemporary Tokyo to your universe."

Mamechiyo created four different designs for the cleansing oils and UV under-base mousse (foundation primers), each based on a specific flower.  I purchased all of the cleansing oils but didn't bother with the primers, as the designs were identical to the ones on the boxes used to house the cleansing oils.  The description of the themes:  "For this special-edition UV under base mousse and cleansing oil, Mamechiyo used four spring flowers cherished in Japan—Fuji, Sakura, Botan, and Ume. Matching each bloom to a women's beauty, a feeling of spring wraps itself around you with a sensitivity reminiscent of the poetic world of spring. mamechiyo invites you to journey between retro and contemporary worlds like butterflies. A new world where fun and color bring happiness and the sensibility of spring blooms, full of hope and a playful beauty."

At the Shu Uemura blog, the style for each flower was described in detail, along with quotes from Japanese poets and an illustration of a girl wearing a kimono with the same designs. 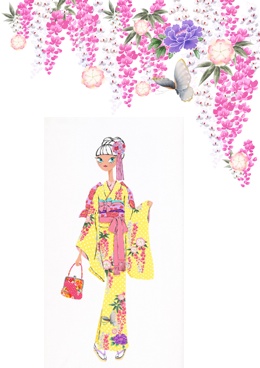 Japanese wisteria, with its delicate light purple dainty and fragrant flowers, holds a special place in Japanese tradition. The long-living wisteria vine lends a meaning of endurance interpreted as modesty; Fuji is a willowy flower that holds its volume but sways in the wind; like a woman who loves to be flamboyant and has a supple mind. Adding the yellow gave it a pop feel, adding a new dimension to the message of this flower: 'intoxicating in love.' I aimed to express the beauty of the FUJI using the coquettish attractiveness of contemporary women.

This design and flower was used for the Advanced formula cleansing oil. 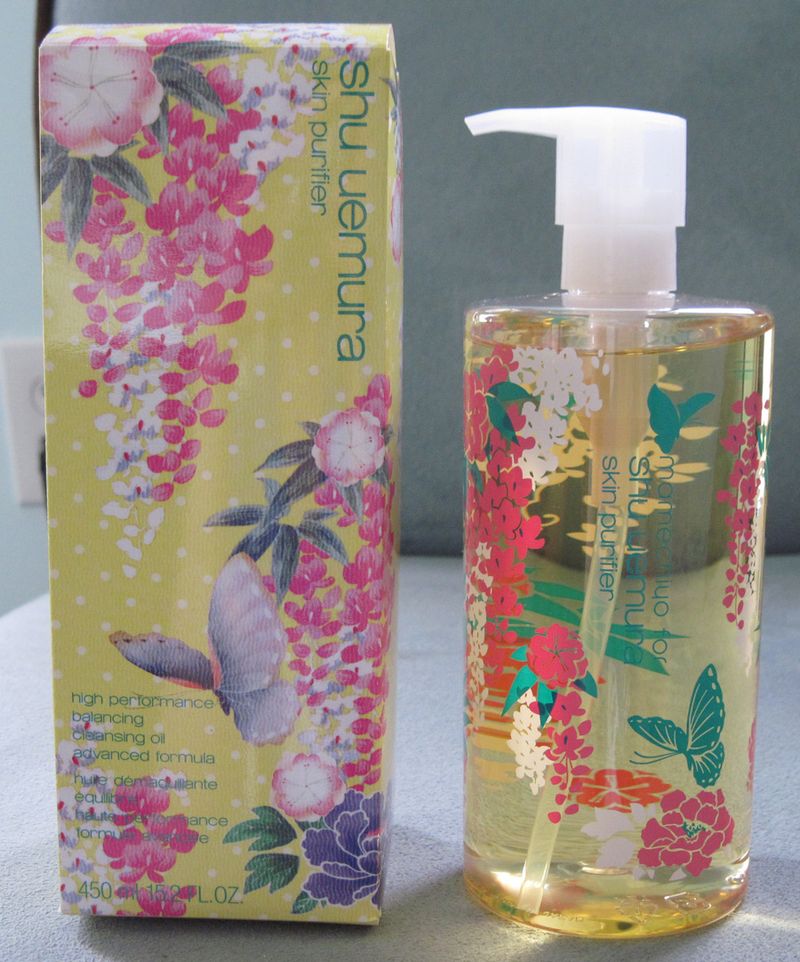 Plum Blossom was used for the Brightening formula cleansing oil.

Ume is the flower of the plum tree, representing a fascinating beauty filled with elegance even in the severe coldness of winter. mamechiyo embellishes her design with the purple of the Japanese traditional arrow pattern used in the kimono worn by the younger generations, to emphasize the Japanese unique traditions from a new point of view, expressing a cool stylishness and unique character fusing with cool impression of purple color. Tradition meets cool in this borderless world with a unique character and sensibility.

'Using the arrow pattern together with the cold color of purple, a colorful characters is brought out.' - mamechiyo 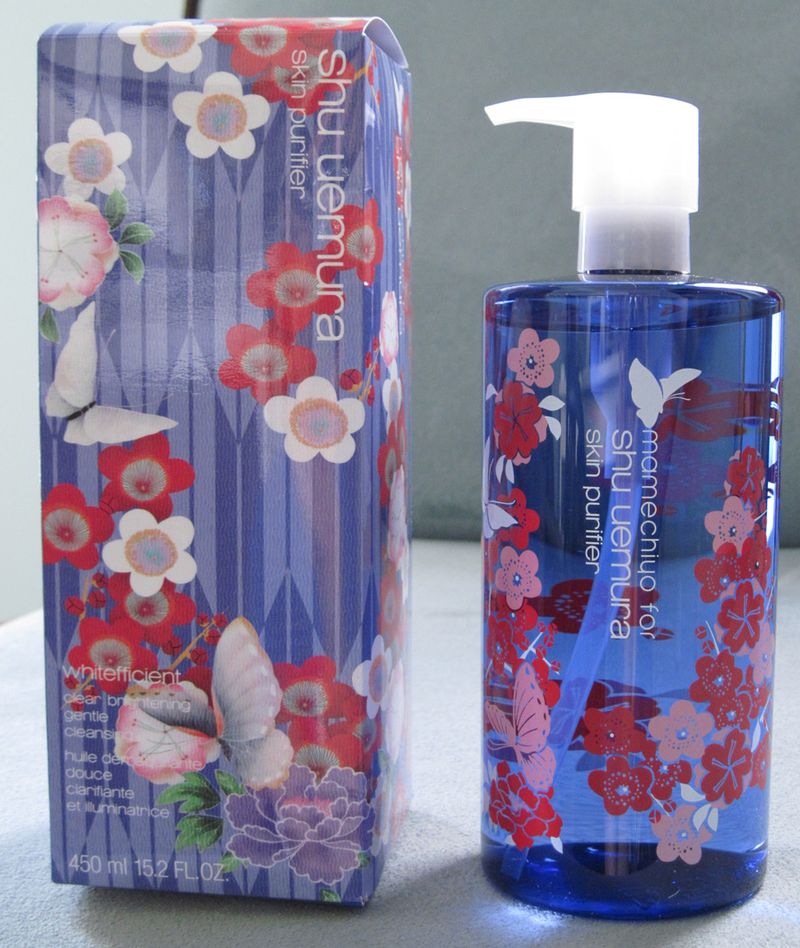 Up next, peony was for the Premium cleansing oil (for some reason this was an Asia-exclusive item, but E-bay saved the day).

Beautiful and elegant in every scene and position, the peony is a strong metaphor for women's natural beauty. Meaning magnificence, and noble, this flower has gorgeous petals layered in richness and beauty. Befit for a king, they speak of magnificence and nobility. Having inner fortitude and dignity, they are also full of flexibility and the rich sensitivity of women. After the full blooms of spring, Botan celebrate the energy of the fresh, young shoots of summer, in a natural green that's not full of emotion, but remains fresh and neutral. Here mamechiyo gives a contemporary edge to that vision.

'Standing, she is a peony. Sitting, a tree peony. Walking, a lily.' ~ anonymous

'To have a strong core,but to have rich sensitivity and flexibility of mind. The color of green in kimono language is neutral. Not movement nor stillness, not feminine not masculine … just like the young fresh leaves after the spring flowers blooms.' - mamechiyo" 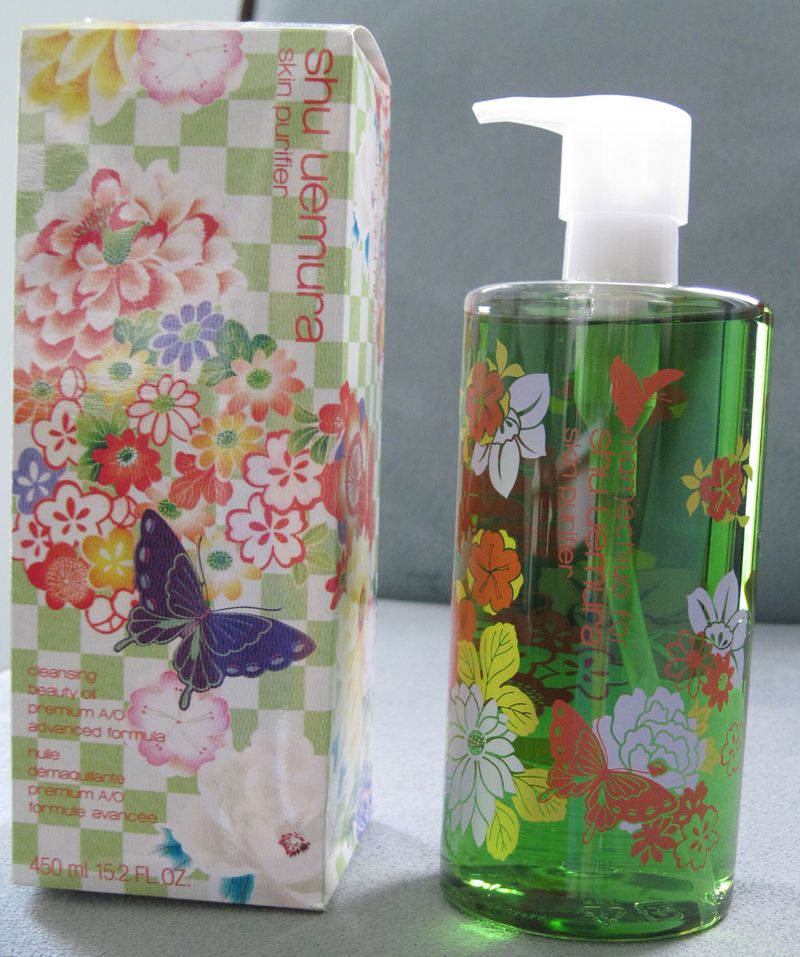 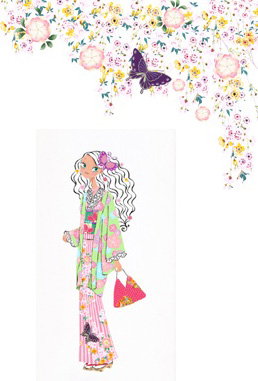 Finally, we have the delicate pink of the cherry blossoms, used for the Fresh formula cleansing oil.

Sakura that represents the ultimate image of Japan, small delicate blooms hold the essence of beauty-swaying in the wind, falling, softly covering the ground in prettiness. Just like gently catching the butterfly's wing, inviting you to the dream world. Meaning "purity" and "elegance" mamechiyo adds a gentle smile, and mixes in stripes for a more contemporary vision of sakura. 'butterfly in my hand – as if it were a spirit. unearthly, unsubstantial' ~ Buson Yosa, Japanese poet (1716-1783)

'like gently catching a butterfly that had been perched on a flower. You are transported into a fuzzy dream world.' - mamechiyo"

I don't know about you, but I love the idea of being in a fuzzy dream world! 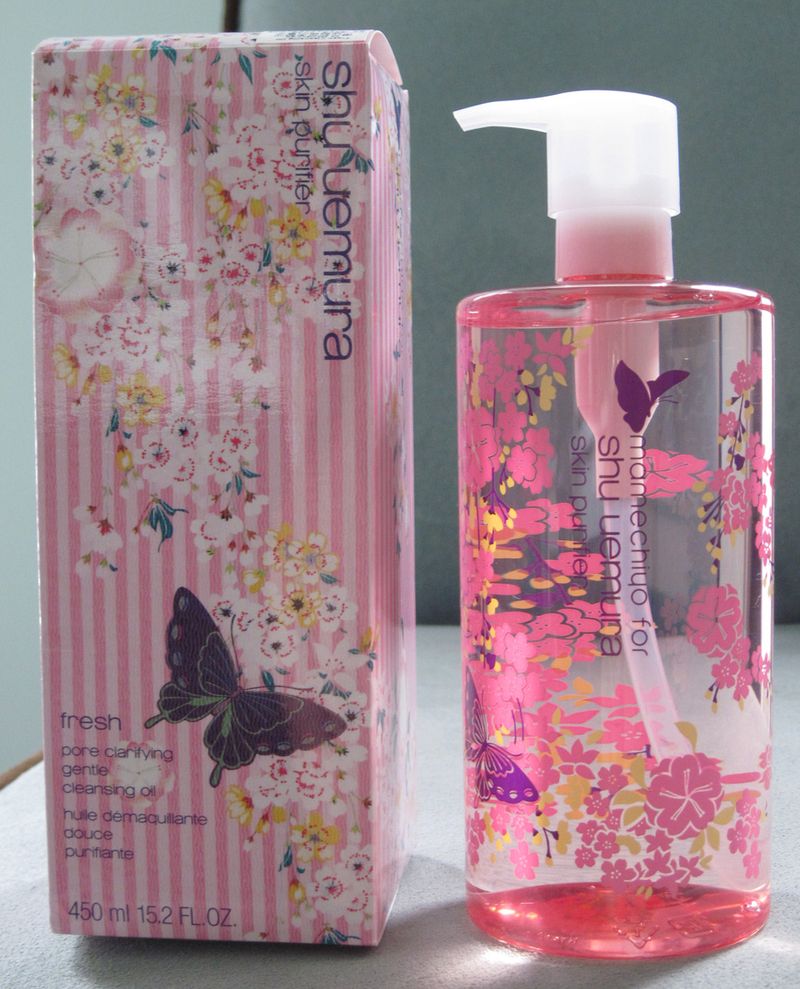 I also couldn't resist this gorgeous and cheerful foundation case: 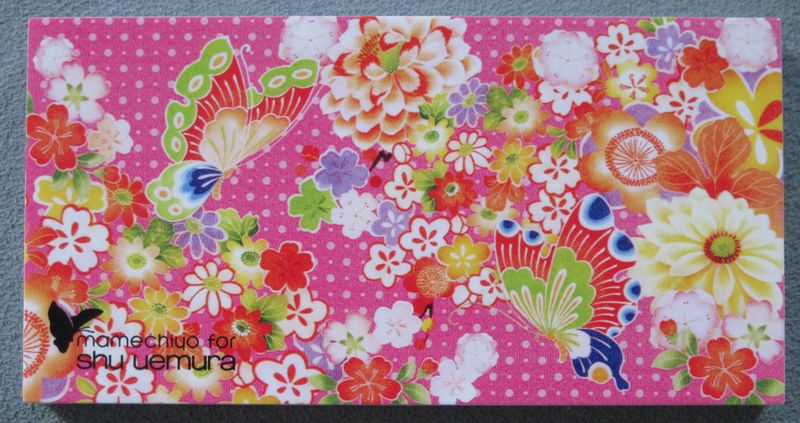 So what inspired Mamechiyo to create kimonos for the modern, Western-influenced woman?  In an interview with Trust Your Style, she says,  "After World War II, the Japanese began to Westernize, and the idea that 'Japanese traditions equal old-fashioned things' became strong. Everyone started mainly wearing Western clothing, and people who wore the kimono as casual wear became scarce. The kimono became formal wear unrelated to expensive new fashions. With the rise of Western clothes, over 50 years of the culture of the 'everyday kimono,' which made both Japanese fashion and landscape so vivid, came to an end...When I was in my teens, after being born into and growing up in this 'Westernized' Japan, I was into London punk fashion on the one hand, but I also enjoyed the fashions of cheap antique kimonos at the same time... it was really fun to take these antique kimonos and coordinate them using a modern sensibility, but it was frustrating that there weren't more kimonos that could blend into the 'cyber scenery' of modern Japan. One day, I realized, 'if these kinds of kimonos aren't out there, then why not make my own?' and I began creating designs for new kimonos that would suit me as someone who grew up in a culture of Western clothing."  She adds that her demographic consists mainly of 20- and 30-somethings who have never worn kimonos, but there are a few older women who are nostalgic for the days when kimono-wearing was common.  As for the style and feel of her kimonos, she insists that "there are no boundaries between old and new eras, but rather boundaries of taste...it's the same reason that there are no boundaries between East and West--if there is taste, the two sides can fuse together."  And the bright colors?  "A kimono can seem very colorful, but in the past, if it was worn in a garden, then it would melt into the scenery. They are all based on colors found in nature."

Much of Mamechiyo's work is a lively melange of seemingly disparate patterns, flowers and butterflies.  Stripes, checkers, dots and arrows figure prominently and were, appropriately enough, used in the boxes for the cleansing oils. 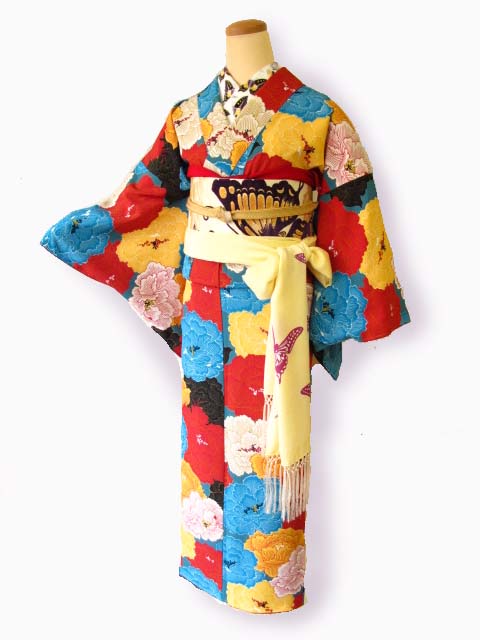 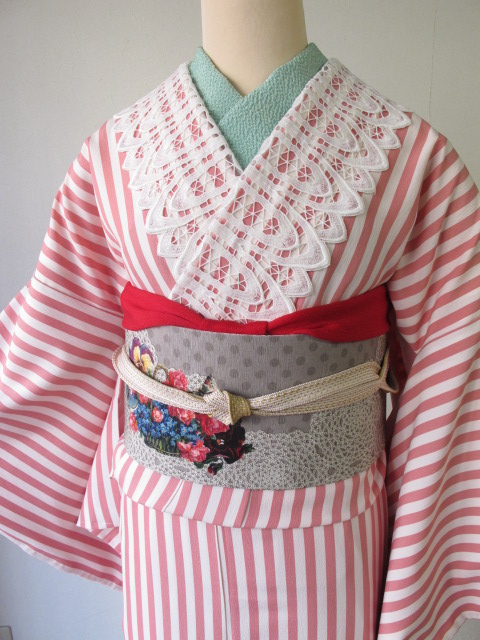 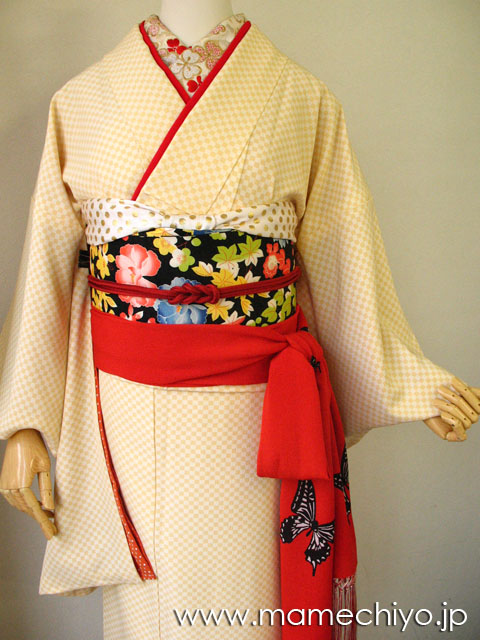 She does branch out on occasion, eschewing the explosion of flowers and butterflies for black lace or a swirly water-like pattern. 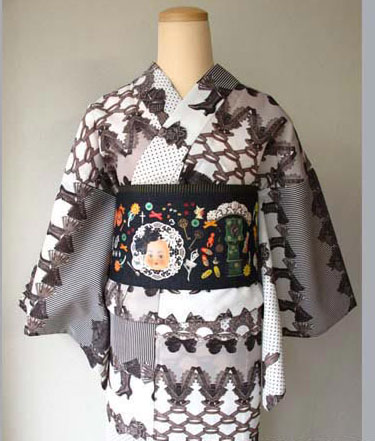 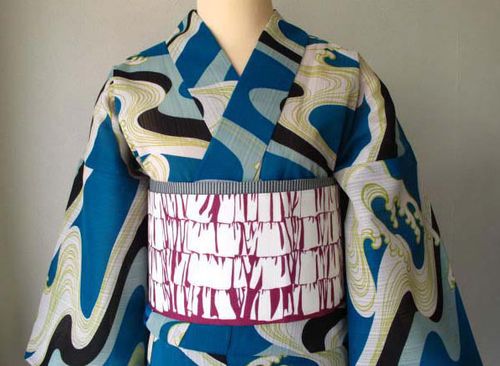 And she even works in some animals.  I was immediately drawn to the koi pattern in the kimono on the left, thinking that the black one on the right was too somber, but then I noticed the cats at the bottom of it. 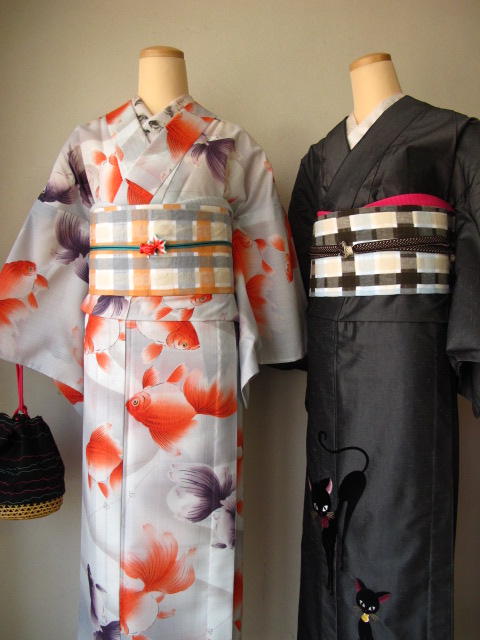 The events surrounding the Shu launch were just as elaborate as the collection itself.  The main press event took place on January 11, with Mamechiyo's patterns spanning the entire floor and ceiling of the space. 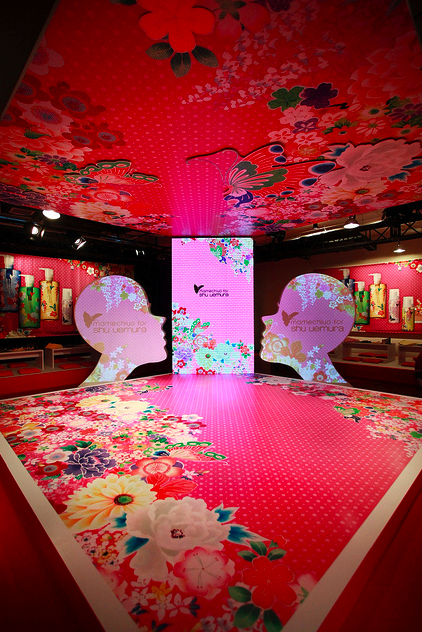 Four models showed off Mamechiyo's kimonos, each one, of course, representing the four flowers. 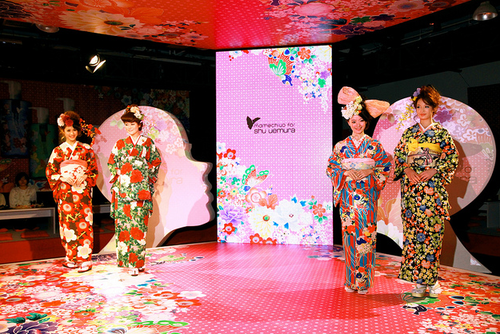 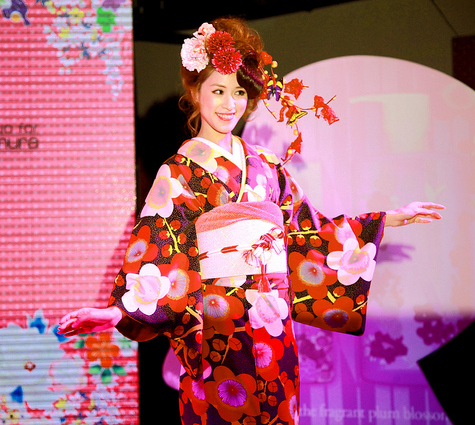 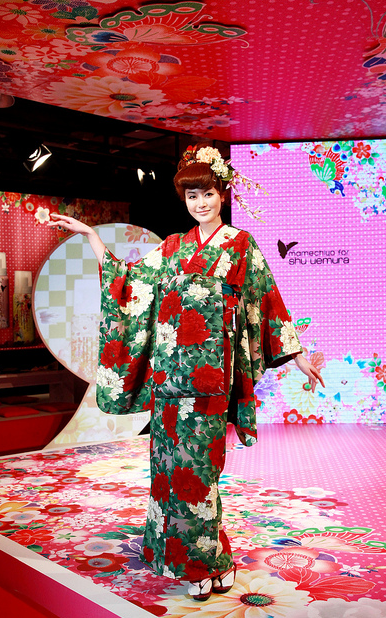 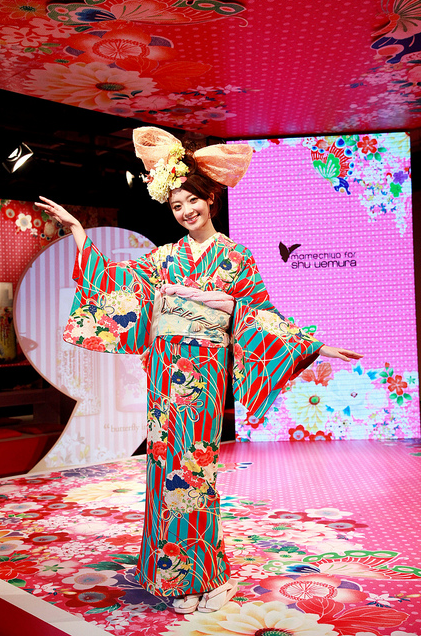 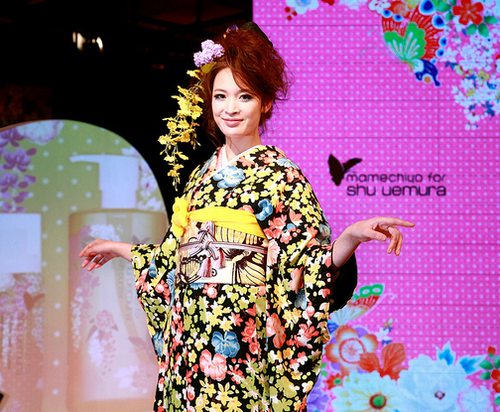 What's not clear is whether these kimonos were especially created for the event or even the collection, given that two of the four had made an appearance at Mamechiyo's blog in 2011.  Unfortunately, Google translate didn't seem to work so I couldn't read the entries on them - it's not certain whether she made the kimonos based on her designs for the collection and then used them for the press event or if they were existing patterns that she then used for the collection.  Anyway, more of her work was modeled at another press event with makeup demonstrations, and there was even a contest in Indonesia where participants submitted their own kimono designs based on the four flower themes.  The winning designs were displayed in the windows of the Shu boutique and modeled at a fashion show hosted by the Raffles Design Institute.

Mamechiyo was no stranger to working with Shu.  In 2007 she constructed an amazing butterfly pattern to adorn the ceiling of the now closed Shu boutique in Boston.  She explains, "I perceived of the boutique's ceiling as a canvas, and produced a work that was a fusion of my world and the world of cosmetics.  Using kimono designs and a fan-based layout, I made a display of three-dimensional butterflies that 'fly' around the ceiling. It was meant to express the metamorphosis that each young woman undergoes in her lifetime." 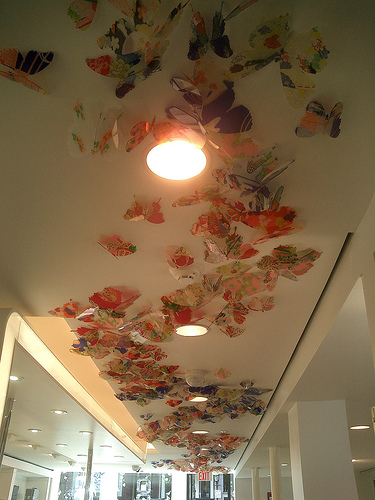 Overall, I think this is easily one of the best collections of the year.  I admire Mamechiyo's creativity with patterns, the imagination she showed in each of the four floral themes for the Shu collection, and most of all, her persistance in pursuing her dream of making kimonos more accessible for the 21st-century woman.  Kimono design1 is not something you hear about all the time, at least not in the West, and the idea to try to make it more modern is pretty unique.

What do you think?  And which design of the four is your favorite?  If I had to choose, I'd say the Fuji is my favorite...but I love them all.

1 Can't get enough kimonos?  Check out Mamechiyo's book here, and if you're in the San Diego area, get thee to the San Diego Museum of Art's show,  Dyeing Elegance:  Asian Modernism and the Art of Kūboku and Hisako Takaku, an exhibit featuring the work of a 20th-century father-daughter team of kimono designers.  For more on the modernization of Japan/East meets West themes as represented in the decorative arts, have a gander at Art Info's slideshow highlighting pieces from the Japan Society's exhibition "Deco Japan:  Shaping Art and Culture, 1920-1945".  I'm guessing it would be a fascinating precursor to the post-WWII modernization Mamechiyo describes.