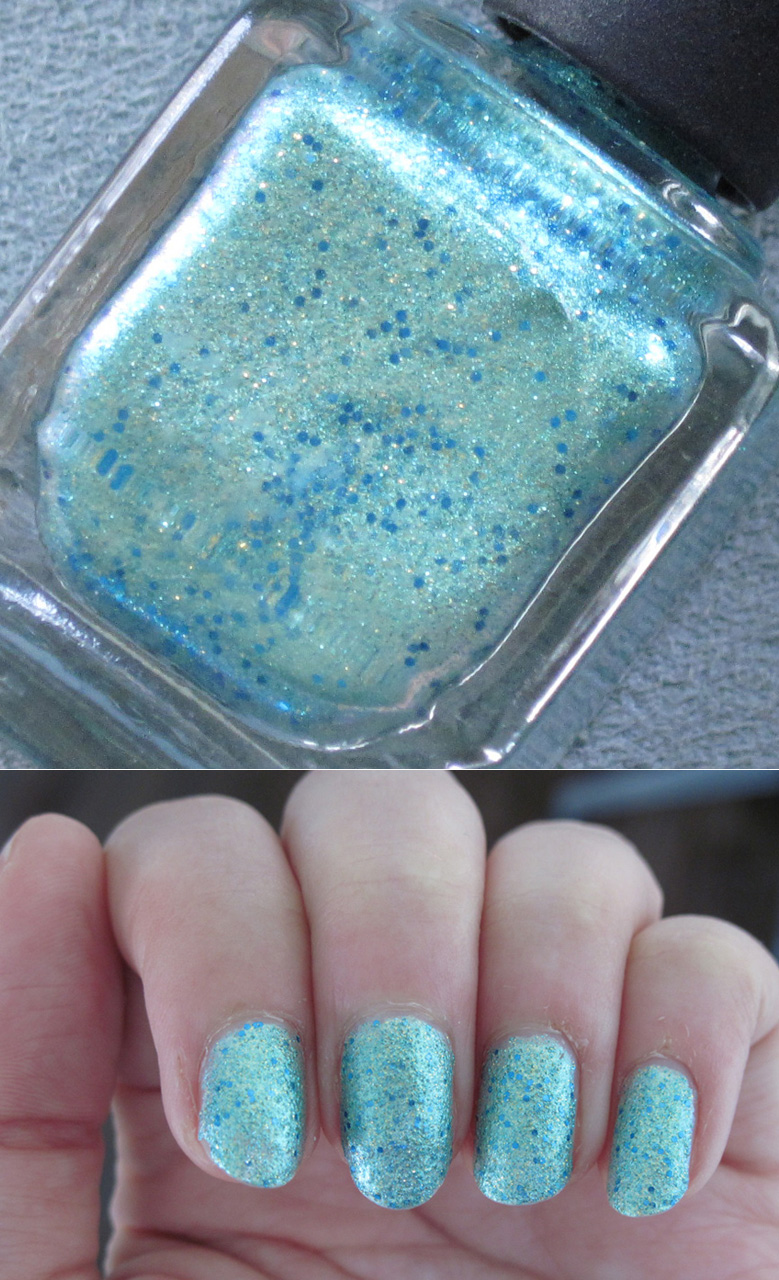 As I write this, I'm wearing Deborah Lippmann Mermaid's Dream nail polish (shown above - excuse the messy cuticles!)  I bought it in part because it's so pretty but mostly for the name.  I touched briefly on my  lifelong love of mermaids last year, but that was just the tip of the iceberg.  When I was little, I had the movie Splash memorized verbatim, and I begged my mom to make me a mermaid costume for Halloween that copied Madison's awesome red and gold tail exactly.  When adults asked me when I wanted to be when I grew up, instead of giving a normal answer like a doctor or teacher, I immediately responded, "A mermaid!"  I thought my obsession had abated as I grew older, but the themes of this year's summer collections brought it back full-force - along with the Animal Planet special on whether mermaids exist (I was completely mesmerized by it).  So I wanted to follow up on the lure of the mermaid by rounding up their appearances in beauty packaging and advertising.

Anna Sui released these delightful bags and blotting sheets in 2010. 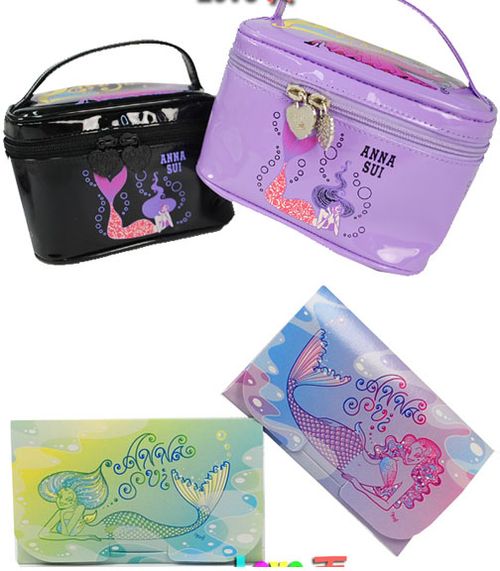 The brand then launched the Glittering Mermaid collection last year (how this slipped through my radar is beyond me - I would have been all over this!)  I especially adore the pedicure kits, which are housed in tins featuring frolicking mermaids. 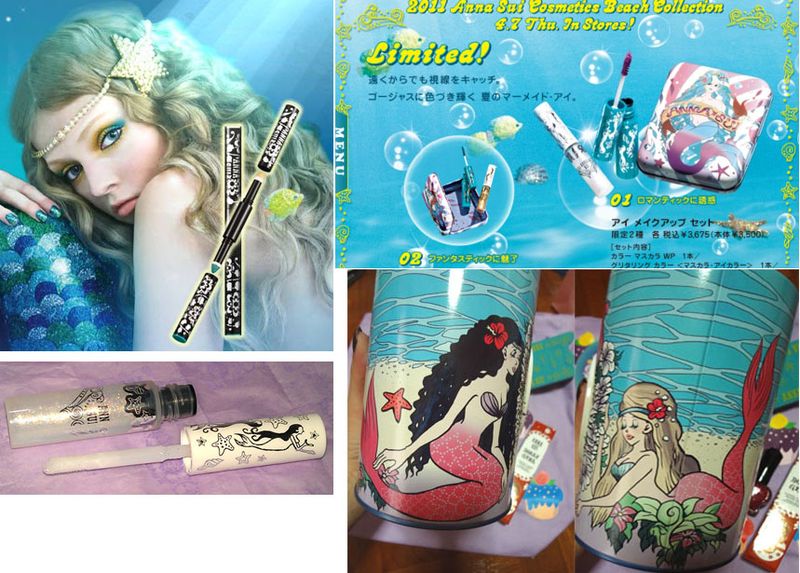 Anna Sui isn't the only company to make use of these mythical creatures in their packaging.  Here are some more examples. 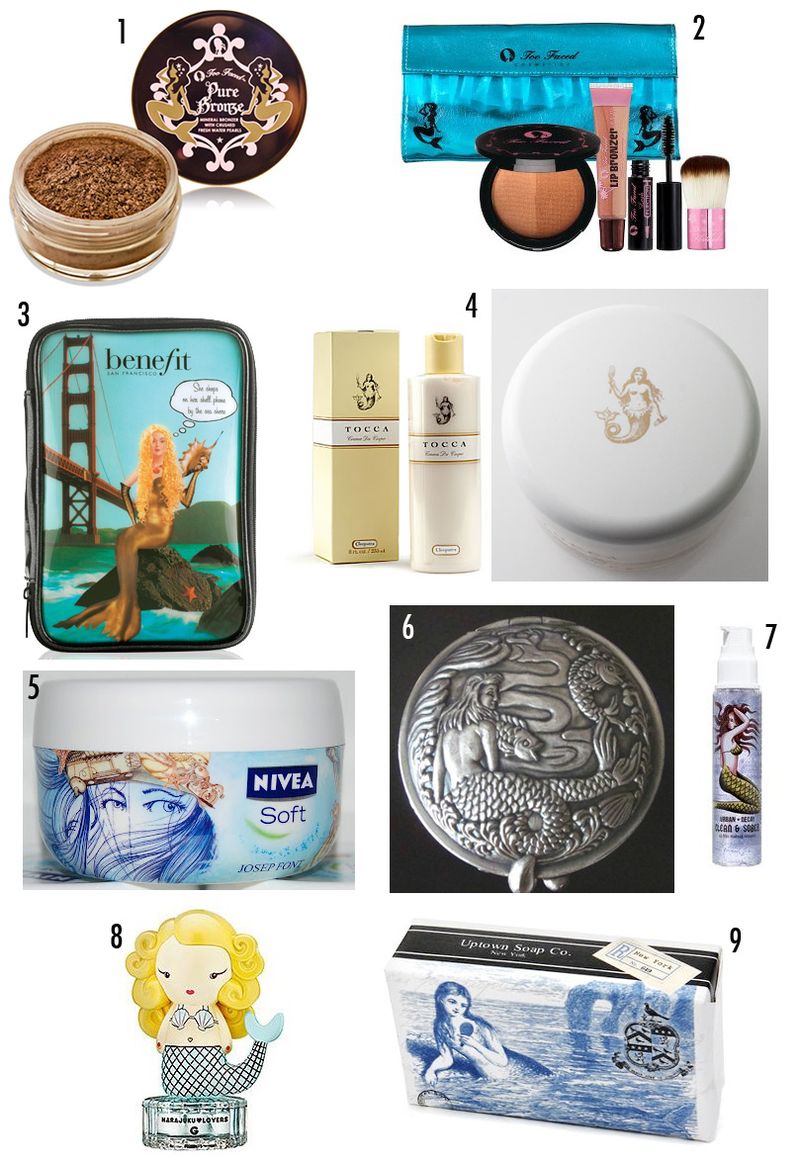 4 - Tocca body wash and moisturizers - the packaging has since been updated and sadly no longer includes mermaids!

Mermaids also loom large in beauty advertising, dating all the way back to the early 20th century. 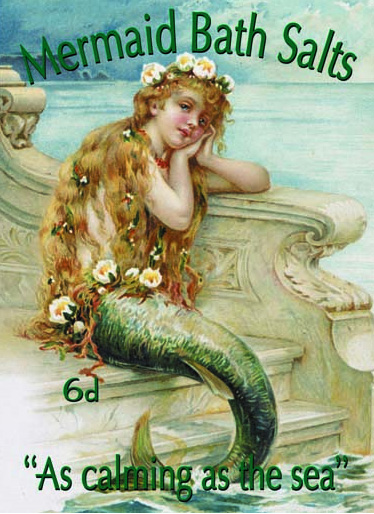 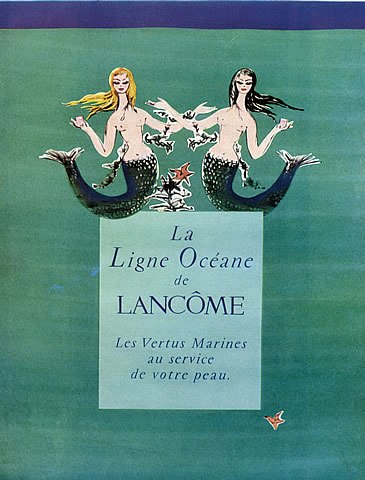 I particularly enjoyed these ads for Dusharme hair cream, which the company branded the "pearl" of hair creams - it's interesting to see the mermaid illustrations change over time.  From 1954 and 1956: 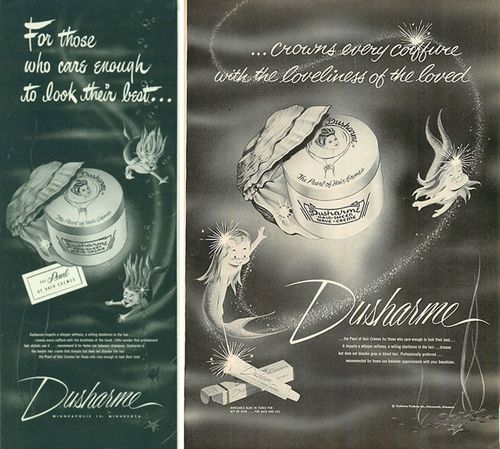 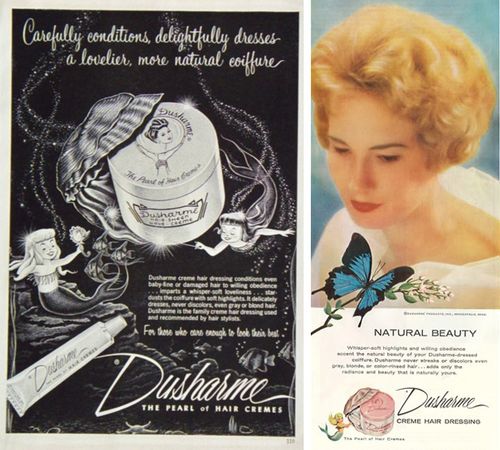 I was tipped off to Ducharme from the blog The Lost City of Atlanta, which, if you love mermaids you really need to check out.   Not only does it reference one of my favorite Futurama episodes, it's chock full of mermaid-related information, from ads to historic accounts of mermaid sightings to fashion.  It hasn't been updated since last year but I'm hoping the author will start writing again!

Anyway, oddly enough, mermaids were also used to sell hair products to men.  Funny how in 1934 "water's bad for [his] hair", but by 1969 hair gel that was "activated" by water was the way to go. 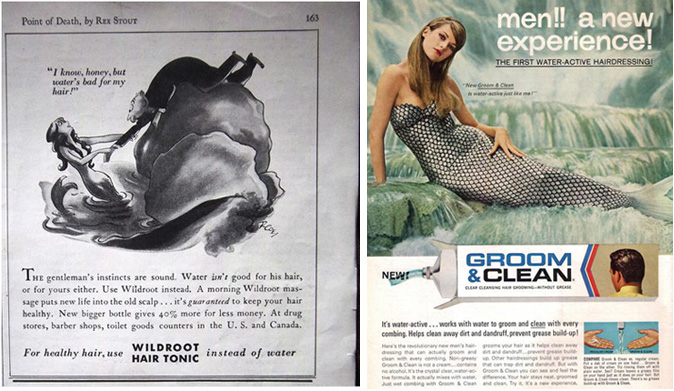 Mermaids were popular for suntan lotions and potions, as in these Dorothy Gray and Guerlain ads from 1947 and 1939, respectively: 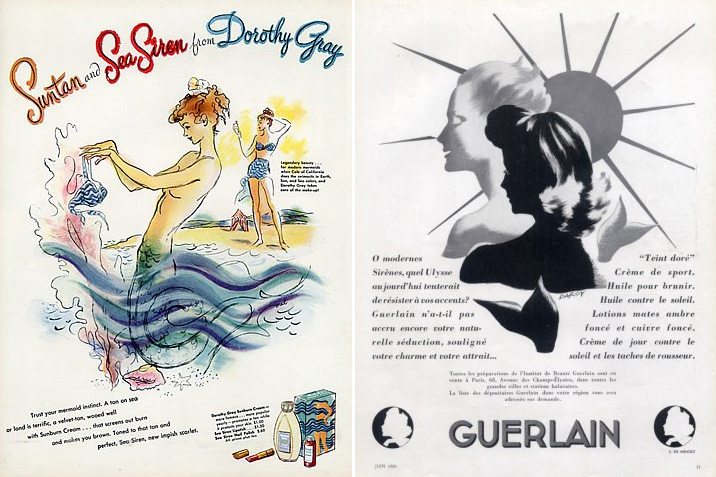 Some contemporary examples mermaids in beauty advertising are this 2011 catalog from beautyhabit.com (which appeared in the summer exhibition) and this postcard for MAC's 2006 Lure collection: 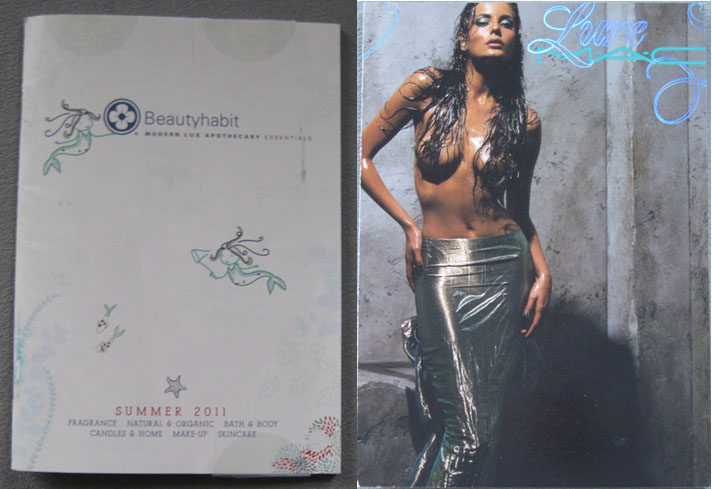 And, of course, some pop tarts couldn't resist dressing as mermaids to hawk products: 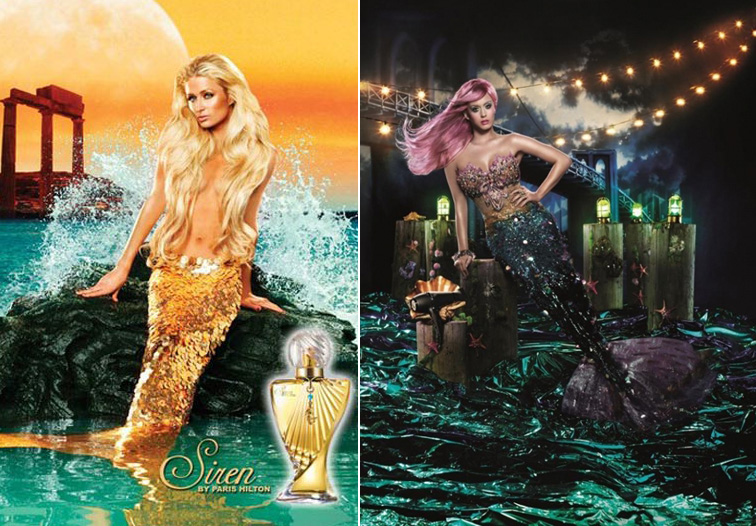 (images from stylefrizz.com and ontheredcarpet.com)

But perhaps the most intriguing (and certainly most elusive) image of mermaids comes from a Stila paint can that was released to celebrate the opening of their counters in Copenhagen, which, as you may know, is home to the Little Mermaid statue in honor of Hans Christian Andersen's book.  It was a mermaid rendered in Stila girl style and I can't remember the color of her tail, but I think she had blonde hair.  I have looked high and low for a picture of this paint can and have come up with nothing, though I KNOW I saw it many years ago.  But perhaps, like mermaids themselves, this Stila can is just a figment of the imagination.  It makes me sad for 2 reasons:  one, this paint can might not actually exist, and two, it means I'm completely losing my mind.

Some questions for you:  Do you like mermaids?  If so, did you watch the Animal Planet special?  Which of the items/ads above is your favorite?

Posted at 10:09 AM in Advertising, Cosmetics history, Vintage | Permalink | 0 comments