Another crazy week!  I mean seriously nuts workwise.  Here are this week's links, plus lots of pics from a very busy and fun day here in B'more.

- This exhibition of couture dresses constructed out of paper looks interesting.

- Remember that it's Father's Day tomorrow.  Here are some cute cards for dear old dad.

- The Curator is a pizza fiend, so the idea of being able to get pizza from a vending machine is quite intriguing!

- I got up super early this morning to run my second race, the Baltimore 10-miler.  You may recall that I ran my first race a little less than 2 months ago (also a 10-miler) and I managed to shave nearly 5 minutes off of that time!  I'm still slow as molasses and I think the Baltimore course was easier than the one I ran for my first race, but I was still pleased.

Here I am waiting to run...is this thing going to start or what? 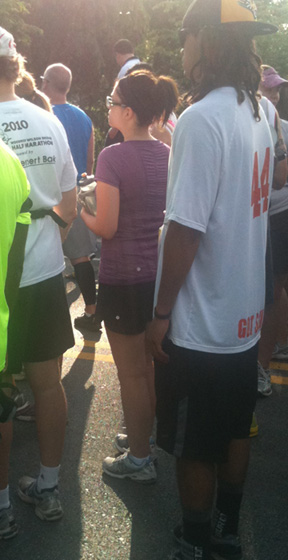 Then we were off.  It was a really fun race and some parts were very pretty and scenic.  I will say that parking was an absolute nightmare - if I run it again next year I will have to leave at like 6am for a 7:30 start, even though we live only about 15 minutes away.

Heading towards the finish line - I like this pic because it finally looks like I'm running.  Every other picture taken of me while running I look like I'm walking (I guess because I practically am since I'm so slow!): 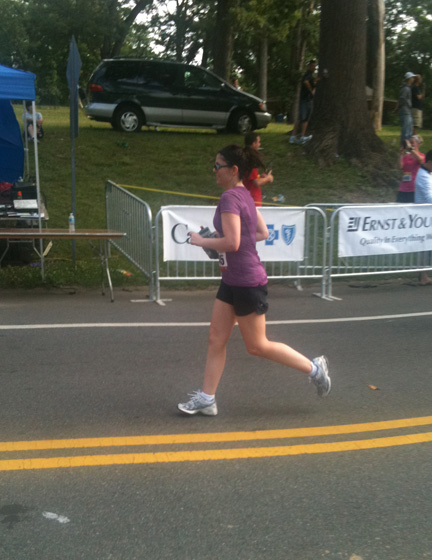 All sweaty and posing for pics for my parents, who drove 2 hours to see me finish!  Yes, my dad is carrying my mom's purse - she gets tired of holding it and makes him carry it on occasion.  Poor guy. 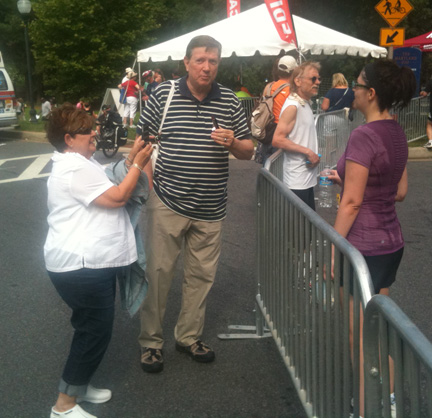 Afterwards we walked around a bit and I got my official time and my race swag (a very nice white pullover with a Baltimore 10-miler patch on the one sleeve).  We tried to get the two free beers each runner is allotted, but the line was about 100 people deep so we just went home.

Then it was off to the Charm City Craft Mafia's Pile of Craft show!  So much fun. 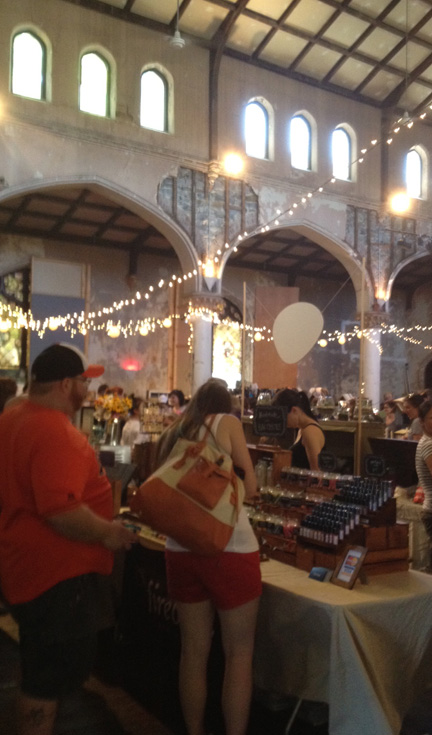 I had been wanting a silver necklace with my initial on it for a while, so when I spotted these from Metamorphosis Metals I had to get it. 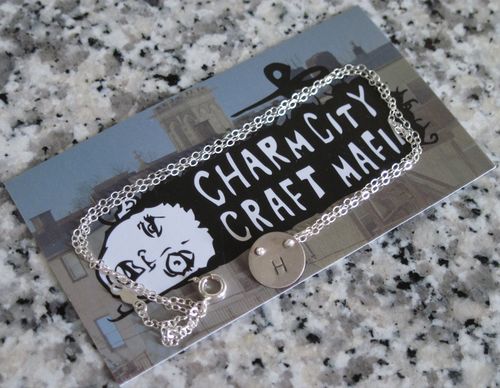 I also picked up this pretty little terrarium from Planted.  I don't care how much fun F*ck Your Noguchi Coffee Table makes of them, I thought it was so cute! 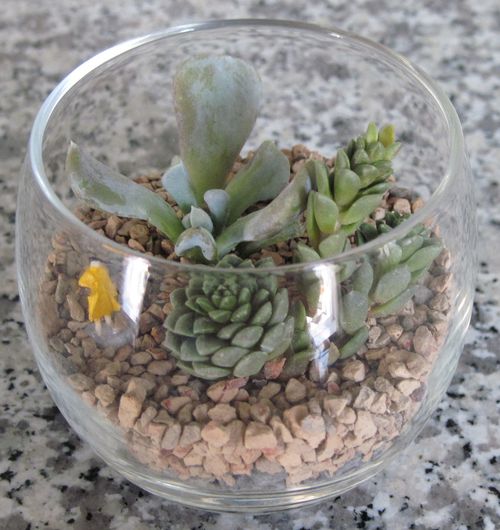 Since I love anything miniature, it was the teeny lady in yellow that made me buy it.  I like to pretend she's having some kind of spiritual journey through the desert. 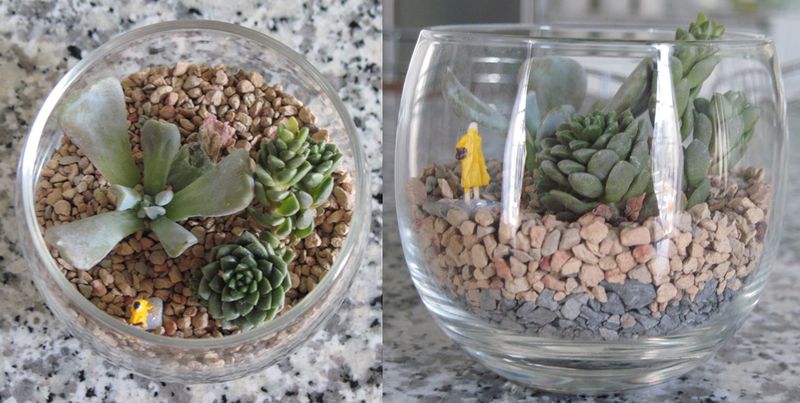 After some delicious sandwiches and matzoh ball soup at Attman's, we headed back home where my parents gave me some things they had picked up on their trip to China, one of which was an ad for a Guerlain makeup exhibit (more on that later).  Then sadly they had to skedaddle since it was almost time for the Baltimore Pride parade and they didn't want to get caught in detours and traffic.  After they left I was going to take a nap since I had been up early for the race (and didn't sleep well the night before because I was nervous) but as this was the scene outside, it was a bit too noisy for me to sleep. 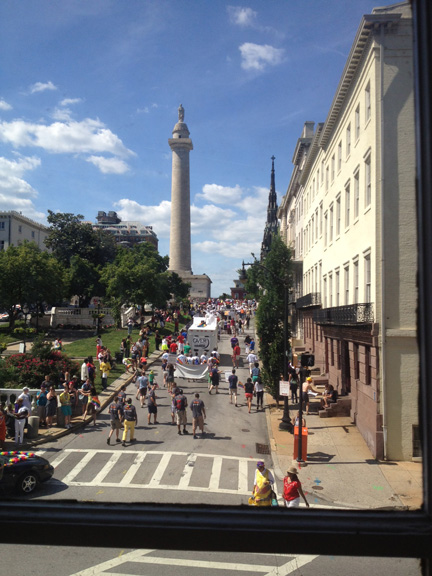 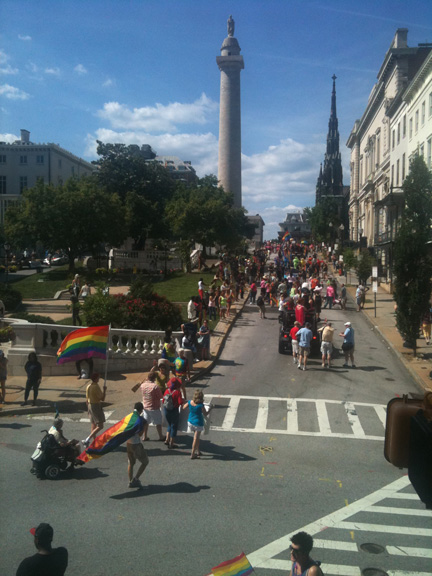 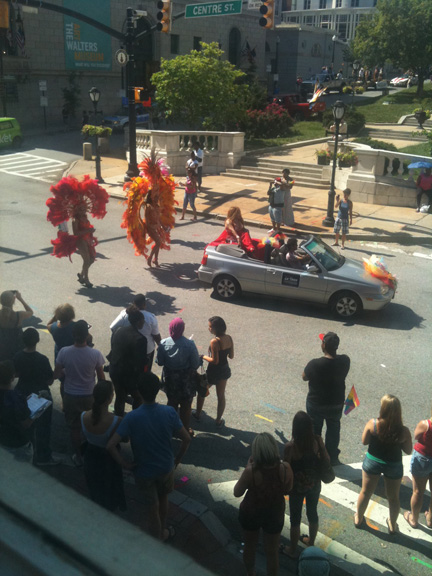 And since it's Sailabration weekend, I also had to contend with the noise from the Blue Angels flying overhead.  They sounded like they were going to fly right into our building, yikes!