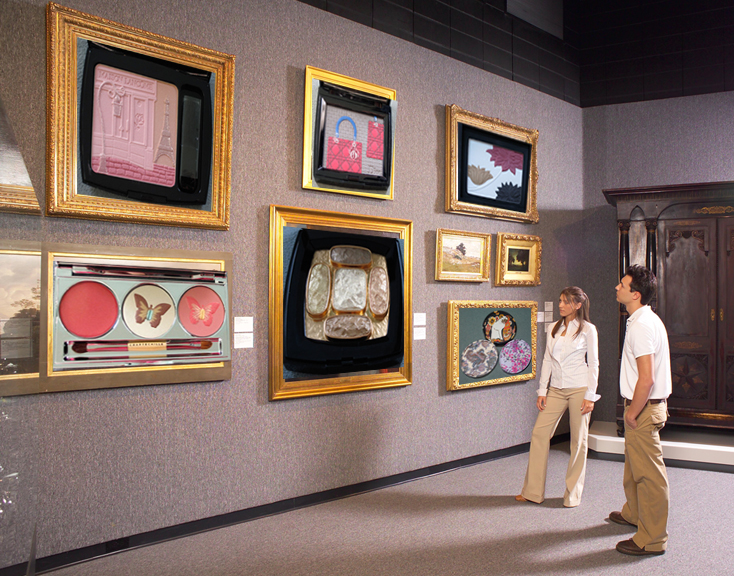 In 2011 I came across several articles about fashion in museums and it got me thinking.  So instead of showing a collection item today, I want to talk about whether makeup belongs in a museum.  (Yes, I realize that I may be biased, but humor me).  Since makeup is so intricately connected to the world of fashion, and since the notion that fashion is art is relatively new and still struggles to be validated, I will use the discussion of fashion-as-art as a springboard.

A poll on whether some makeup pieces are "more art than function" at Temptalia revealed that beauty fans and bloggers overwhelmingly think makeup is not meant to be collected and displayed.  One of their top reasons:  It'll go bad.   "...Make-up is not like other stuff such as jewelry, clothes, or shoes, it will expire in time so no point to keep it," says one commenter at Temptalia.  Adds Glinda at Manolo for the Beauty:    "I wonder exactly how long a makeup palette would last, anyway.  I’m guessing that to keep it in prime condition, you wouldn’t open it if you could help it.   Otherwise, I would be afraid of something happening to it.  If I spent that much money, I’d be paranoid that even a tiny bit of exposure to oxygen would hasten its demise."

Second, many feel makeup is meant to be worn, not looked at; it's totally impractical to buy a makeup item and not use it.  "If a product is too beautiful to look at, why buy it. Isn’t the purpose of buying a product is to use it. I like packaging but art powder deco seems a bit over the top. Unless the product is totally functional, I wouldn’t care if the art design faded but if it wasn’t functional and bought it purely for aesthetic purposes then not only would I feel like a fool but have also wasted $$$ for some eye candy.  No thank you."   Says another, "i just get my brush and i actually dont care about spoiling the design or pattern and swipe swipe away and enjoy the colour of the product. too busy a person to sit looking at a pattern all day and i cant afford to buy pretty things to just sit in a drawer and have no purpose."

Along this line of thinking, Sarah Joynt at The Fashion Spot points out that the design of some limited edition palettes actually interfere with their usage, citing MAC's Street Art palette.  "From luxury brands such as MAC and NARS to UK drugstore favorite No. 7, we've seen eye shadow and blusher palettes that feature intricate designs either sprayed on or baked into the powder. But are they really worth the investment? Sure they're pretty and collectors items, if you're into things like that, but for the most part they aren't practical, and if you're looking to buy an eye shadow palette, you want to be able to use it.  For example, the MAC Street Art Palette from the Art of Powder Collection (above, left) features six colors in a graphic design. While the set itself might boast a heavier than normal weight (0.31oz, meaning more product for you to use) the design limits you to the point where there are some colors that you can't even access without blending into an adjacent shade."

Finally, many beauty enthusiasts argue that since cosmetics are mass-produced, they are not really art.  From the Temptalia poll:

"Pretty makeup designs are certainly fun! But when it comes down to it…it is a manufactured product, you know? It’s NOT art. It may have been designed by an artist, but ultimately it was mass-produced by a machine for a specific purpose – to be used on your face, ultimately resulting in a ruined design. ..There’s plenty of legit art out there to enjoy in that way."

"...[D]esigns like this belong on a fabric pattern or on a picture…not makeup. This is a gimmick. After all, this is just made of powder and once you start using it, the design starts to disappear over use. This is impractical. This is makeup…not Picasso."

Personally, I feel these express quite a narrow-minded perspective.  My question is WHY NOT?  Why can't certain makeup items be considered art?  A snippet from this article from The Atlantic, which discusses how fashion is art, can also be used to make the case for makeup as art despite its mass production.   "With its fluctuating forms and needless decoration, fashion epitomizes the supposedly unproductive waste that inspired 20th-century technocrats to dream of central planning. It exists for no good reason. But that’s practically a definition of art... it’s hard to come up with objections to fashion collections that don’t apply to other museum departments. Fashion is mass produced? So are prints and posters, often more so than haute couture. Ephemeral? So are works on paper. Utilitarian? So are pots and vases."  I'd also like to point out that artists collaborate with makeup companies to create limited-edition pieces, which serve to showcase the work of the artist and elevate the item from its utilitarian purpose.

This interview with fashion curator Valerie Steele gave me hope that one day, makeup will make it into a museum despite all the naysayers.   Steele discussed how she managed to establish fashion as a valid field of study, and by extension, how it became acceptable to display clothing at an art museum.  "The fact that fashion’s increasingly shown in museums has contributed to the beginnings of a dialogue about whether fashion should be perhaps redefined as art. I think the museum has a very important role because we’re used to thinking of things that are in museums as art, even if they weren’t originally created as art. So lots of ritual objects, for example from Africa or Oceania, were not originally created as art. They were part of ritual and daily life. But now they’ve been redefined as art. So the fact that a Balenciaga ball gown was originally made by a 'couturier' and not an 'artist,' someone who was trained in haute couture and sold it to a lady to wear, that original function does not necessarily trump all later definitions."  The same can be said of makeup.  Even though it is meant to be used, the intended purpose does not necessarily make it impossible to consider makeup as art.

Finally, even if makeup will never be viewed as "high art" or a valid field of academic study, it still provides entertainment. In response to an article at Bust regarding whether fashion deserves to be in a museum, a commenter writes, "Arguing over what is art or not is missing the point. If it gets people in the door and they get the chance to experience something new, it's valuable. It's also an entrance point for people who might not otherwise visit a museum, and who then might wander into other exhibits."

So, what do you think?  Do you think cosmetics have a place in museums?  Would you visit a makeup exhibition?