It's finally starting to feel like fall here, despite 3 straight days of rain this week.  I don't know about you, but around this time of year I get obsessed with baking anything with pumpkin in it.  Along with, of course, drinking Starbucks Pumpkin Spice lattes.  Here are some links from this mid-autumn week.

- My only fall decoration involves small pumpkins and gourds, so naturally I found this post on decorating with them hilarious.

- Some other funny things - two new-to-me blogs:  Anthroparodie and ANIMALS TALKING IN ALL CAPS.  Go check 'em out when you want to laugh.

- In the beauty world, Beautifulwithbrains reveals the deadly beauty secret of King of France Henry II's mistress, while Everydaybeauty covers the new makeup book by Besame founder Gabriela Hernandez.  While I'm a little chagrined that it provides a history of makeup, I am mostly okay with it because my makeup book will have a slightly different focus.

- I'm a little down and bitter today as the Baltimore Running Festival is taking place.  I was supposed to be running the marathon.  :(  Instead, I'm sitting here still upset by the fact that late last year, literally 3 days after I decided I would start training for it, I developed a nasty injury that prevented me from running AT ALL for nearly 9 months.  I'm only just now getting back into running, and thus, I have to completely start from scratch in terms of training.  Come hell or high water, I'll be running the 2012 Baltimore marathon!  Fingers crossed my body cooperates and the injury doesn't flare up too badly again (it's still not even completely healed), and that something else doesn't start hurting.

- What makes me feel better is looking at pictures of Babos or other cute creatures.  And this is possibly the cutest thing I've seen all week, via Pinterest: 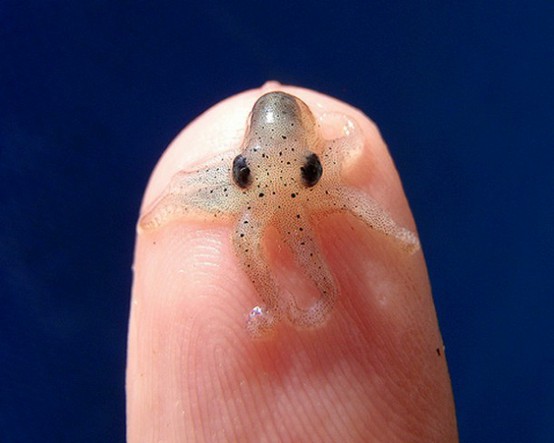 Nope, it's not a glass miniature but a real live teeny tiny octopus!!

What have you been up to this week?