Whew!  It was quite a struggle, but I managed to get my paws on what may be the most exclusive makeup item in recent history.   I bought it months ago but wanted to wait till the rest of the Byzantine collection was actually out (it has been for a couple of weeks now).

*drumroll*  This is the piece de resistance, the Makeup Museum's equivalent to the Louvre's Mona Lisa, THE stand-out in the entire collection thus far (and easily the most expensive many times over, oof):  Lumieres Byzances de Chanel! 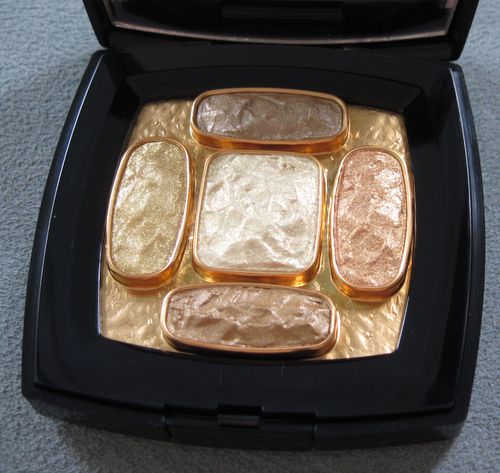 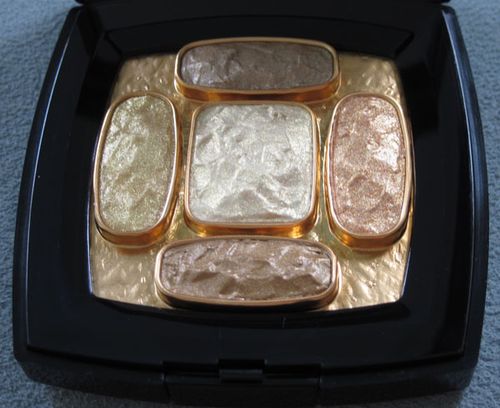 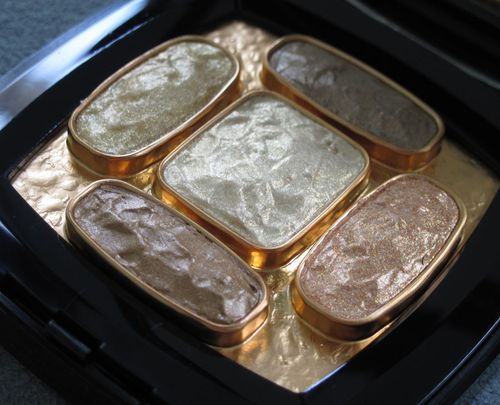 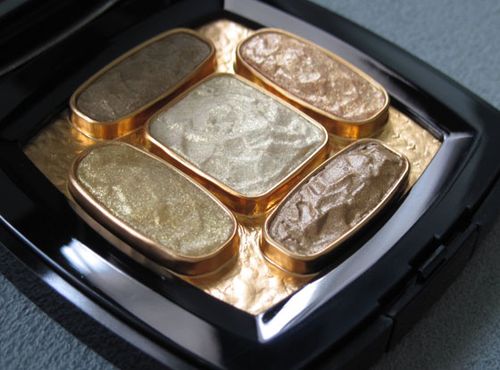 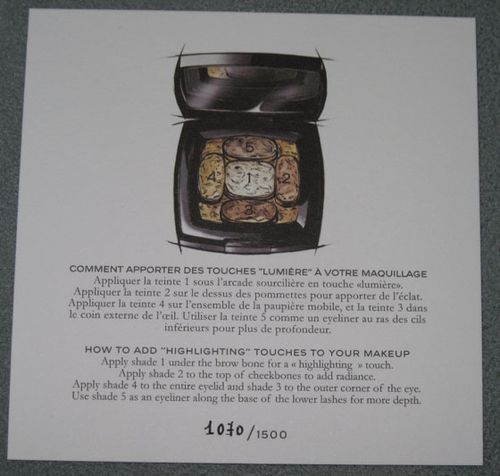 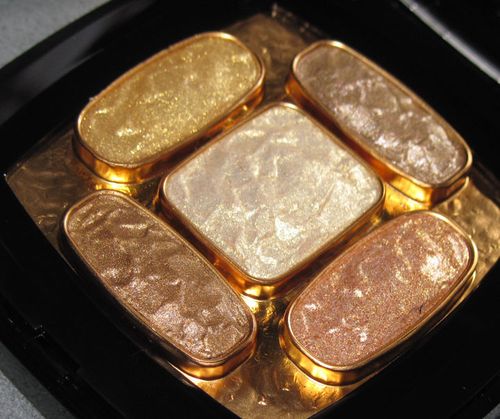 And some more pics because I couldn't seem to stop taking pictures of it - too pretty!! 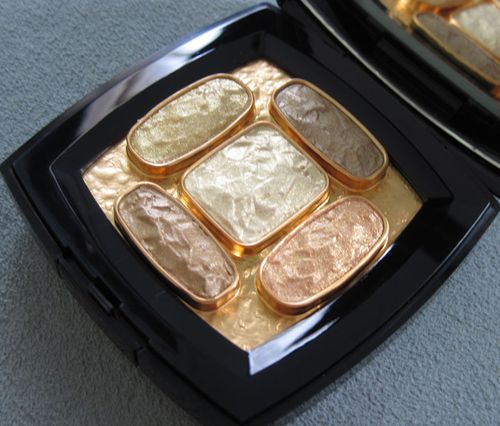 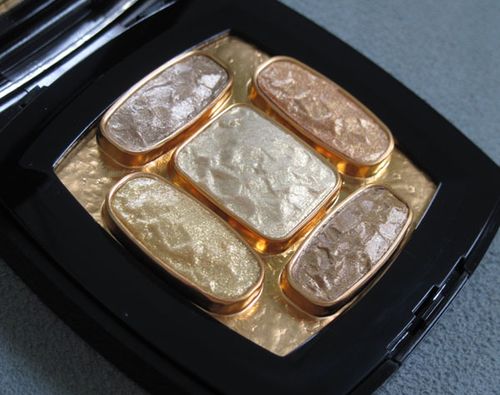 The Chanel Byzantine makeup collection was meant to be paired with the pre-fall 2011 fashion collection.  According to Fashionologie, "The theme was inspired by Gabrielle Chanel's Byzantine cross-adorned cuffs and the Byzantine empress Theodora."  Says Karl Lagerfeld, "Theodora was a circus artist who became empress, like Chanel, who was a little singer and became a fashion empress...I like the idea of these two strong women."  And the Chanel website had a nice little summary of the exact architecture Mr. Lagerfeld was so inspired by:

"The Church of San Vitale in Ravenna, Italy was constructed between 527 and 548 during the reign of Emperor Justinian and his wife Theodora. The UNESCO-protected monument is a treasure trove of glittering glass and enamel mosaics, which attracted the lens of Karl Lagerfeld in 2010. Portraying richly-dressed figures laden with jewels, these images bear witness to the extravagance of Constantinople and the splendour of its iconography.

Karl Lagerfeld plays with this aesthetic in conceiving a collection that glitters with reflections of this vanished luxury. Recently unveiled in Istanbul, the collection revives historical ties between Ravenna and Byzantium that saw San Vitale serve as the prototype for the Hagia Sophia in Istanbul. Now the capital of Turkey, Istanbul was once known as Byzantium and renamed Constantinople in 330, when it became capital of the Eastern Roman Empire. At the peak of its success in the sixth century, the burgeoning empire gave rise to a brilliant, refined civilisation that survived until the fall of Constantinople in 1453. Mosaic-lined basilicas are a testament to the society at the heart of the Christian empire. The last remnants of this iconic art survive in Ravenna to this day."

When I was quickly perusing Byzantine art online1, several things struck me:  the use of gold in the background of icon paintings, the iridescent jewel-like glass of the mosaics, and the overall opulence that the art embodied.  All of these attributes were beautifully translated into the Chanel collection.

First, the gold, both fabric and jewelry: 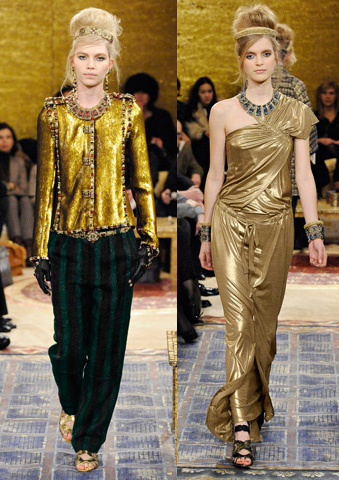 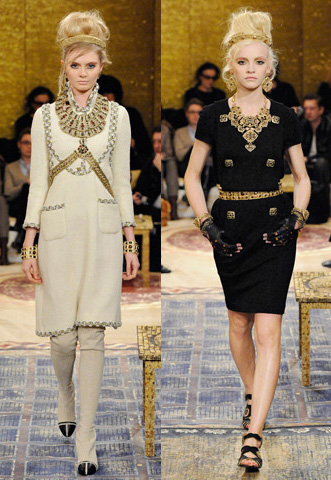 The mosaic-like patterns on some of the pieces (I've never seen anything like the sleeves and collar on the coat on the right!): 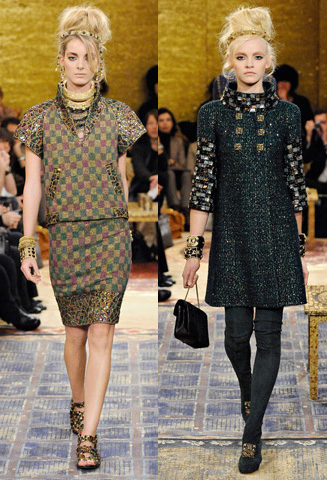 And finally, the richness of velvet and embroidery: 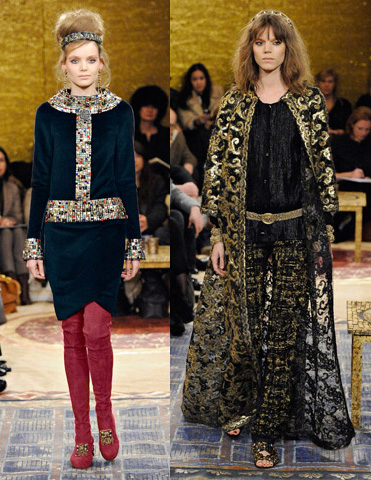 And obviously, the Lumieres palette shares these features as well:  gold inlay used to hold the individual shadows, their shiny jewel-like shapes, and rich colors and texture (obviously I didn't swatch the palette, but I bet the cream shadows have a wonderful texture).  I think the best part of the Byzantine collection, besides the lovely and extravagant palette, is that the makeup look of the runway show was directly taken from Theodora's face as portrayed in the mosaic at the San Vitale church. 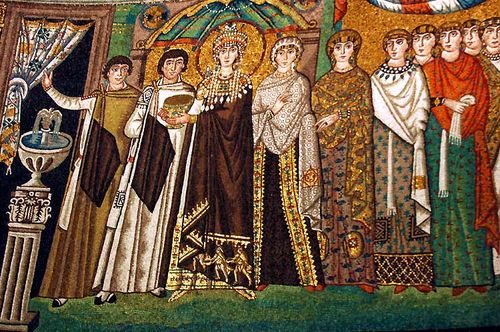 According to talkingmakeup.com, Peter Philips, Global Creative Director of Chanel Makeup, had this to say:  “The links and associations with Chanel are rich and plenty. Karl Lagerfeld gave Sam [McKnight] and me a sketch giving us a rough idea of the direction he wanted for the look, from then the tone was set. Karl also showed us the world-famous mosaic portrait of Theodora, the Empress of the Byzantine Empire Mosaic from the Saint-Vital de Ravenne Basilica, which very naturally became the inspiration for the show’s makeup.  The portrait gave me a focus point : the red eye shadow/liner that she wears on the arch of her eyebrows. This look is all about light and rich textures. The choreography between gold, bronze, black and red can be easily personalized according to the desires of each woman.”

Here's a closeup of Theodora and the makeup at the show so you can really see the influence: 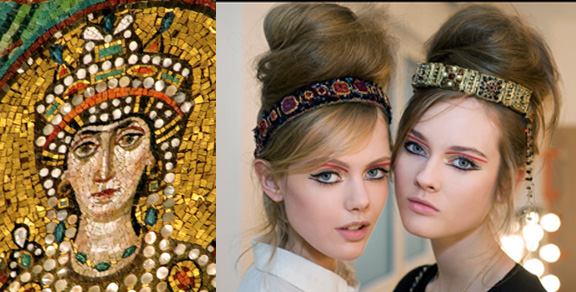 (images from thebolognadiaries.wordpress.com and talkingmakeup.com)

I adore the headbands too - you can see one in this fragment of a floor mosaic from the Met.  The woman, Ktisis, is "a personification of generous donation or foundation": 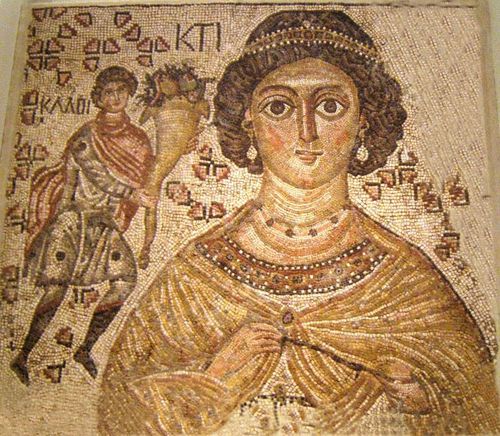 As a really cool bonus, Chanel made these amazing mosaic window displays at their South Coast Plaza boutique - the Beauty Look Book has some great pictures of them!

So there you have it.  I do wonder if we will ever see a makeup item quite like this - both in terms of price and how well it ties into a given theme - ever again.

1 For more on Byzantine art online, check out the Metropolitan Museum of Art's summary here.  For books, I'd check out Helen C. Evans (Curator of Early Christian and Byzantine Art at the Met) and Robin Cormack, Professor Emeritus of Art History at the Courtauld Institute of Art.