No posts for this week and no Curator's Corner today, but I'm pleased to announce that Ada Calhoun, one of the authors behind the awesome 90swoman.com blog, asked me to write a piece on 90s womanhood!!  I was so honored.  Naturally my thoughts went to makeup and 90s beauty trends.  And also naturally, I was extremely long-winded so the piece was edited ever so slightly so as not to bore readers.  However, I have no issue with boring my own readers (all 2 of them, ha), so here it is in its entirety.  Enjoy!  And do check out 90swoman.com, even if you're not of that generation - it's truly a fascinating look at the era.  :)  Thanks again, Ada! 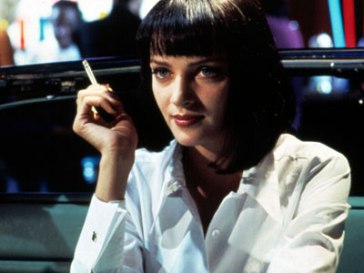 Matte brown lipstick.  Heroin chic.  White eye shadow.  The grunge look.  These were the major beauty trends of the 90s.  And they’ve been earning the attention of the fashion and beauty world in the past year or so.  In January 2010 Selfridges staged an in-store exhibition devoted to the 90s, complete with a vintage M.A.C. Cosmetics face chart showcasing their (at the time) wildly popular brown lip liner named, appropriately enough, Twig.  Fashion and beauty bloggers have also been covering the revival of the decade’s trends.  “Messy plaids, patchwork and the overall look of 90’s grunge is back for Fall 2010, and we aren’t just talking about the fashion.  The beauty industry is taking its cue from the Courtney Love days of dark, red lipstick paired with overdone, smoky eye make-up…A disheveled plaid tee layered under a floral dress and dirty boots are the perfect balance with a dramatic ‘I don’t care’ make-up look,” wrote Jessica Ciarla at The Fashion Spot.  Last summer beauty blog Lovelyish provided a nostalgic look at 90s makeup trends.  This year, fashion blog Refinery29 reports that the “sleeper hit” of summer 2011 is 90s grunge lip color:  “Even though summer is currently awash in happy, vivid corals and pinks, there's another lip trend we've been tracking, too: A modern version of grunge-inspired lips. Mixing deep magenta-red with a little shimmer, they're like the love child of a '90s era Drew Barrymore and Married with Children's Kelly Bundy… pair your tribute-to-the-nineties lip with extra dark brows and matte skin. So angst-y!”  Finally, retailer Urban Outfitters named Cher from 1995’s Clueless their latest beauty icon.

Fashion trends, and by extension, beauty trends, are cyclical – usually about 20 years after the initial phenomenon began, it becomes in vogue once again and is slightly updated.  So it’s not surprising that the 90s are making a comeback now.

But the point I want to make isn’t that the 90s are back fashion and makeup-wise.  Rather, I want to take a look at the transformation the beauty industry underwent in the 90s as a direct response to the new notions women had about makeup.  In 1995, the L.A. Times quoted a beauty newsletter editor as saying, "The creativity the department stores had 10 years ago doesn't exist today…the top five brands control 75% of the makeup business."  Something had to give to meet the beauty needs of the 90s woman, and it did.

Between the influence of “lipstick feminism”*, Naomi Wolf’s The Beauty Myth, Riot Grrrl (and “girl power”, its co-opted, commercialized, mainstream offshoot made popular by the Spice Girls), and the smeared red lipstick of grunge poster child Courtney Love, more and more 90s women began wearing makeup not with the simplistic goal of looking pretty, but rather as a means of self-expression and empowerment.  They also didn’t want to feel as though they were being brainwashed by cosmetic companies telling them that they wouldn’t be beautiful without makeup – wearing it had to be their decision alone, and they would wear it (or not) on their own terms.  This outlook represented a huge shift in thinking about cosmetics, and beauty and business gurus pounced on it.

In 1994 makeup artist Jeannine Lobell created a makeup line called Stila.  The name coming from the Italian word “stilare”, which means “to pen”, Lobell believed every woman’s makeup should be as unique as her signature.  The cardboard containers (this environmentally-friendly packaging was a breakthrough at the time) also displayed quotes from famous women that could be seen as empowering:  Elizabeth Cady Stanton’s “The best protection any woman can have is courage,” and "Failure is impossible" by Susan B. Anthony are just a few of the quotes that made an appearance on Stila’s eye shadows.  These marketing strategies encouraged the idea that women could let their individuality shine through their makeup, and that it could even make them feel powerful.

1995 and 1996 saw the introduction of “alternative” makeup lines Hard Candy and Urban Decay, respectively.  Both got their start by introducing non-traditional nail polish colors that the founders first mixed themselves – Sky, a pastel blue, in the case of Hard Candy, and a purple color from Urban Decay.  And both were revolutionizing the beauty industry and filling in the gaps left by mainstream cosmetic companies by offering non-traditional hues.  From the Urban Decay website:  “Heaven forbid you wanted purple or green nails, because you’d either have to whip out a marker, or risk life and limb with that back alley drugstore junk…The first magazine ad [for Urban Decay] queried ‘Does Pink Make You Puke?,’ fueling the revolution as cosmetics industry executives scrambled to keep up.”

A 1998 New York Times profile of Hard Candy founder Dineh Mohajer, states that she was a leader in providing the modern teenage girl with the daring makeup she wanted to use to express herself.  “Ms. Mohajer's timing couldn't have been better: young women were ready for hard-edged, ‘ugly’ colors, which were a departure from the powdery, harmless pinks that once accompanied every American girl's journey to womanhood. Suddenly, blue lips, blue hair and blue fingernails became a statement about independence -- even if independence might make you look as if you were suffering from frostbite.”  Still, in the article Mohajer insists that ''I didn't make that first batch of blue nail polish so I could stand up to men or be outrageous…or so I could make some sort of stand for women.”  She continues:  “[what] it's really about is self-esteem, women being able to do whatever they want and look stylish and attractive and cute at the same time.”  Mohajer, who was all of 22 when she founded Hard Candy, clearly represented the new way in which women were viewing makeup.

The decade culminated in the 1999 release of celebrity makeup artist Kevyn Aucoin’s iconic book Making Faces.  The book offered details of makeovers performed on “real” women, and provided step-by-step instructions to create a myriad of looks.  Women could essentially try on personalities like “The Diva” or “The Siren” through makeup.  Aucoin writes in the introduction, “…it is my hope that you will find yourself, or rather, your selves inside.”  His book was illustrative of the sweeping change that took hold in both the general population’s notion of cosmetics and the beauty industry.

Where does all of this leave us now?  I’m of the opinion that if you asked teenagers and women today, most would say they don’t wear makeup for anyone but themselves.  Personally I wear it because it makes me happy and because I think it’s fun to play with color, not because I feel as though I have put on my “face” before going out in public.  While I can’t know for sure what other women think, I have a feeling most of my generation and younger generations share this perspective.  That is one of the indisputable legacies of the 90s.

So, girls and women of today, bear in mind that your perception of cosmetics is in some way descended from ground-breaking beauty philosophies that were set in motion some 20 years ago.  The notions that makeup can be a creative outlet and a way to express your individuality were forged back then.  And if you’re a true 90s woman, relish the current comeback of makeup trends from your decade…everything except the matte brown lipstick.

*The debate between lipstick feminists and second-wave feminists is far too broad to discuss in this post.  I’m leaving out the argument as to whether women should or shouldn’t be participating in beauty rituals; I’m only mentioning lipstick feminism as one of the many reasons for the change in women’s perception of wearing makeup in the 90s.