Whew, it was hot this week.  As much as I hate getting all sweaty, I do prefer it to being cold.  And of course, the days will be getting longer up until the solstice, so I'm greatly enjoying the daylight.

Here is the weekly round-up.

On the local front:

- Love to see one of my favorite mags mentioning the creator of some our plushies (and Museum registrars!)

- I missed HonFest again.  It's just as well - way too hot and humid to be wandering outside for hours on 36th St.

- I like making ice cream and I like having people over, therefore,   I want to have an ice cream social!  And have cute invites like these.

- The New York Times on Riot Grrrl.  I MUST disagree with this statement:  "Now, two decades after its heyday, riot grrrl is beginning to formally take stock of itself."  Um, hello, I wrote my thesis on it in 2004.  So this interest isn't exactly new.  If it is, well then, I'm a pioneer in the field!

- Finally, some makeup design weirdness from Ted Noten.  Guns freak me out, so this is definitely not for me.  I understand it's meant to be more cool-Bond-girl and an exploration of traditional gender roles, but I'm still not crazy about it. 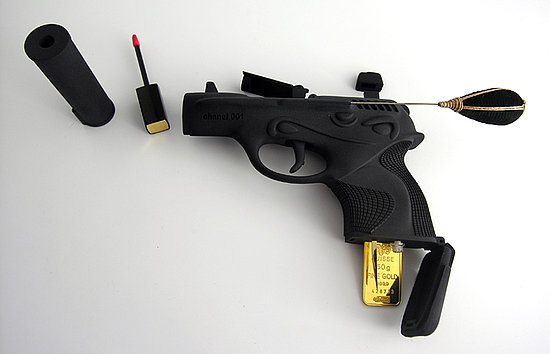 And of course, the idea of a makeup gun reminds this Simpsons fan of Homer's ill-fated invention: 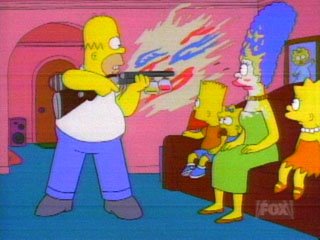 Yeah, I don't think any sort of makeup guns, however meaningful or "design-y" they were meant to be, are a good idea.  :P