Makeup Minute posted about the German Brand Uslu Airlines last week and I was struck by the company's ad.  It reminds me quite a lot of Morris Louis' work, especially since they chose to orient the lip glosses vertically rather than horizontally. 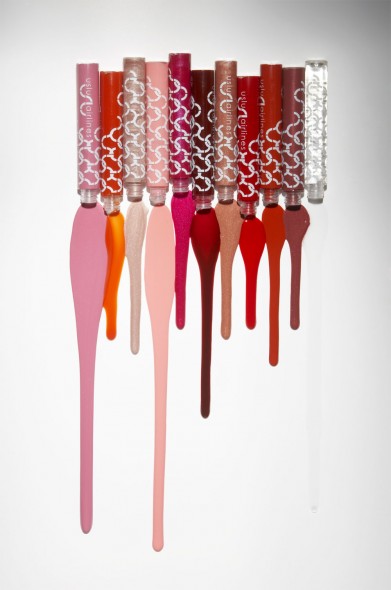 Here's a work by Louis, one of the Curator's favorite artists (I like his work but he's also one of my faves because he was born here in B'more and attended MICA!)  This is one of his later works entitled 1-81. 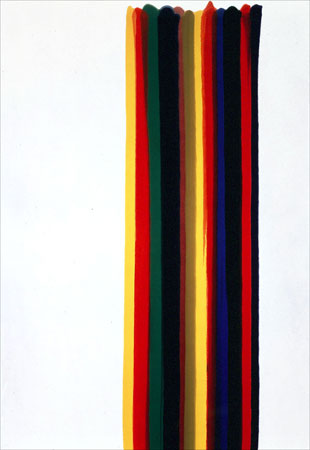 Morris Louis (1912-1962) is known for staining, rather than painting directly on, unprimed canvases with thinned acrylic paints.  This created abstract, monumental fields of bold color.  What's really interesting is that he painted in a tiny room in the house he shared with his wife, and the canvases he favored were so big he had to fold them.  He never actually saw many of his works completely open and hung up in a gallery.  Oh, and he was very secretive about his work - he left behind no techniques of how he poured the paint onto the canvas, and no one, not even his wife, ever saw him at work.  She would come home from work and the studio would be perfectly neat and the canvases he had been working on all put away.1  If you have a chance to see some of his work in person I highly encourage it.   Not only are they sort of hypnotizing to look at,  but you can really see how he served as a bridge between Abstract Expressionism (Pollock, Rothko) and the beginning of Color Field Painting (Noland, Kelly.)

I realize that an ad used to sell lip glosses and the paintings of a great artist have nothing in common, but I did think in this instance it was a valid comparison and a nice way to talk about one of my favorite artists.  :)

1 All of this info is from a podcast at the Hirshhorn Museum featuring curator and Louis expert Diane Upright.  For more on Morris Louis, check out this 2006 exhibition review in the Washington Post and an essay by his champion and famed art critic Clement Greenberg.