The Curator is positively beside herself with excitement!  I first laid eyes on these about a week and half ago and was dizzy with joy.  Shu partnered with Japanese manga artist Moyoco Anno for a new set of limited-edition cleansing oils, along with a brush set and train case.  Since I collect all the limited-edition cleansing oils I knew I had to have these.  It's been a few years since Shu last did an entire set of oils with an outside artist, so I was really pleased to see them make a return.

Moyoco Anno is a top manga illustrator.  If, like me, this is the first time you've heard the word "manga" and are wondering what it is, manga are a type of Japanese comic/cartoon, usually serialized into magazines of 20-40 pages.  There are all types of genres, from horror to romance to sci-fi.  Moyoco Anno primarily draws Josei manga, the Japanese equivalent of what Americans refer to as "chick-lit" , but also created several very popular series for girls aged 13 and younger.  I love that the majority of Shu's outside collaborations have been with women artists - first Ai Yamaguchi, then Mika Ninagawa, and now Anno.

Here's a pic of the oils in their boxes (excuse how crooked the picture is - Ansel Adams I am not.) From left to right: Tamaki (enriched), Katsura (brightening), Matsuno (premium), Sakurako (fresh), and Tsuruha (advanced).  The names are not the names of the cleansing oils themselves, but rather the character that Anno created for each one.  "Kamon" refers to a Japanese family crest and each design corresponds to the personalities of the different women.  For a good description of each one, check out this article from Lifestyle Asia. 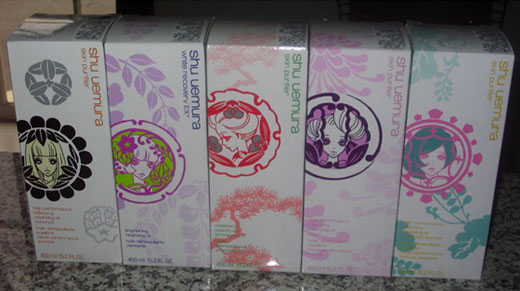 Out of the boxes: 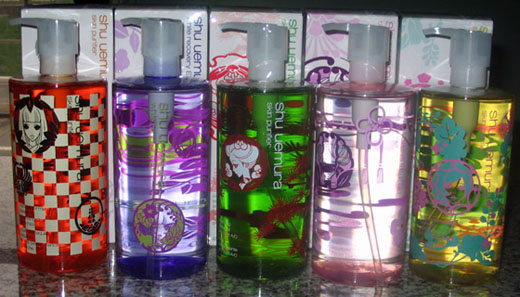 The E-bay seller I procured these from was truly amazing - he threw in tons of skincare samples, along with an adorable Taiwan-exclusive traincase keychain (or so he told me - you might be able to get it elsewhere.) 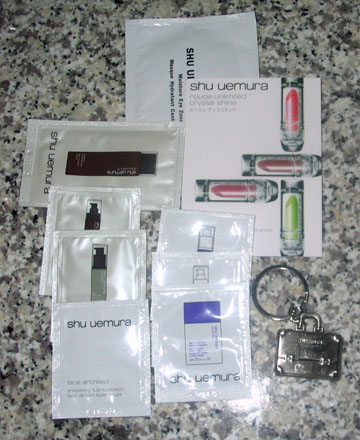 Close-up of the keychain: 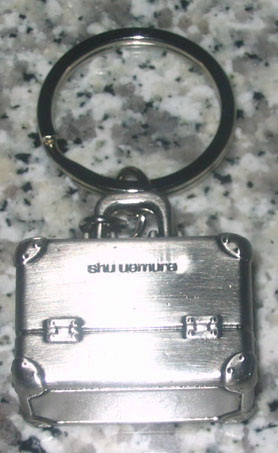 Finally, a note about availability: I called Shu to find out whether these would be available in the U.S.  While the rep told me that these would not be coming stateside, a number of blogs across the globe have covered them - besides Hong Kong, Japan, and the Phillipines, I've seen online blurbs about the collection in Vogue Australia and Vogue France, complete with pricing info in their respective currency.  So if the collection will be available in Europe, Australia and Asia, I don't see why the U.S. market would be shut out.  If you're like me and simply cannot wait to see if these will make it to the states, there are a couple of items on E-bay, but I'm speculating that the collection might make an official U.S. appearance in the fall...keep your eyes peeled!

Posted at 08:57 AM in Artist collaboration, Shu Uemura | Permalink | 0 comments