Friday Fun: A rocket in your pocket! 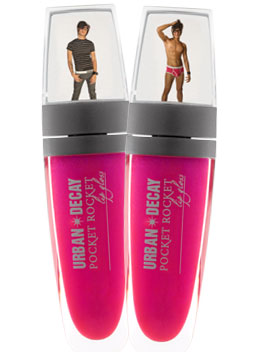 In the midst of my all-too frequent Sephora browsing I came across these little gems from Urban Decay.  Each shade features a different man/outfit, complete with individual names. (This picture is of "James".)   The ad copy mentions that they're perfect for a bachelorette party and I'm inclined to agree - since they're not doing the "full monty" they're not overly racy, just good fun.  While I'd buy these just for the packaging, I'm curious to know whether the lip gloss itself is actually of good quality.  I should probably buy a few to find out.  ;)

Yesterday's post got me thinking about another coral-inspired makeup item:  Chantecaille's lovely coral highlighting powder from spring 2007.  A portion of the proceeds went to Reefs of Hope, run by the Pew Institute of Ocean Science. 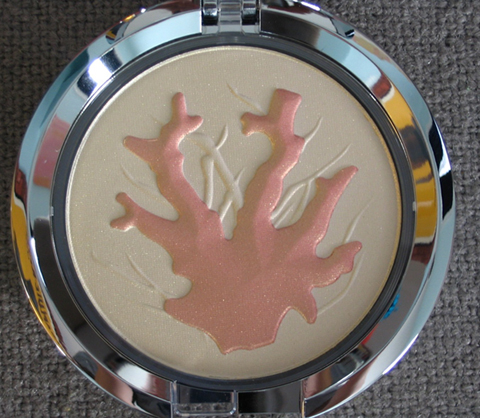 But the real collectible is this little gem by designer Jay Strongwater, who teamed up with Chantecaille to create a limited-edition, hand-lacquered refillable compact.  Unfortunately I lacked (er, still lack) the $420 (!!!) necessary to purchase this, but I would love to get my hands on this for the Museum if it were still available.  Just another item that got away! 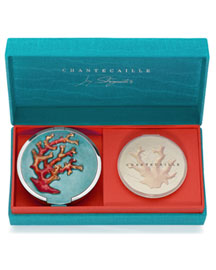 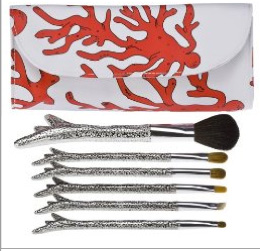 The end of Memorial Day weekend signals the beginning of summer (although in my mind, summer doesn't officially start until the solstice on June 21) and what better way to kick off the season than a set of coral reef shaped brushes?  I've seen this sort of design on utensils before, but never makeup brushes - I believe this is the first brush set that has been molded to a particular shape.  The bag adds a nice splash of color too.  Summer here we come!

Posted at 10:26 AM in Design, Other makeup brands | Permalink | 0 comments

A rose by any other name: MAC's Rose Romance collection

MAC followed in Prescriptives' footsteps and released its own rose-embossed blushes as part of their Rose Romance collection.  While I did enjoy the Prescriptives palettes, I like that MAC sculpted a rose in the powder itself rather than choosing to do a two-dimensional rose overlay like Prescriptives.

Here's Blush of Youth beauty powder (there is another one called Summer Rose, but seeing as how it's essentially the same powder, just in a different color, I didn't buy it since precious Museum funds could be used elsewhere): 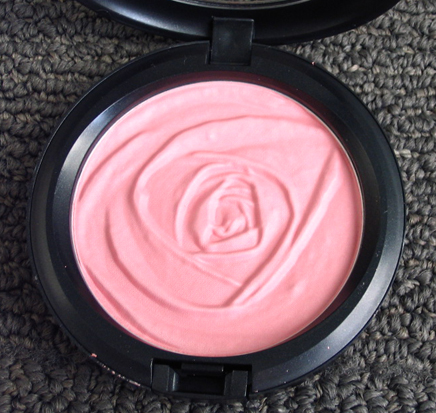 This collection was released only a few weeks ago, but MAC has already come out with a Museum-worthy collection - Style Warriors.  Stay tuned!

It's a jungle out there: Guerlain Exotic Paradise palette

I've been really enjoying these Guerlain eye shadow compacts that have patterns on each of the four shadows.  Their latest features a fairly abstract interpretation of leaves you might find growing deep within the jungle. 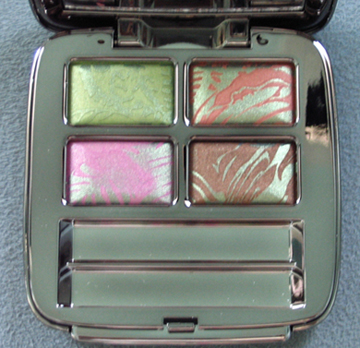 This palette definitely reminds me more of a jungle rather than desert island palm trees, and that in turn reminded me of one of my favorite artists.  Henri Rousseau (1844-1910) was a self-taught French artist who didn't begin painting until he was in his early 40s, and depicted many jungle scenes even though he had never left France. 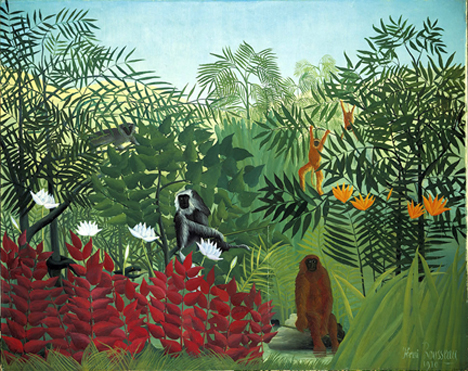 And now for some personal/art history/makeup museum-related insight.  Rousseau is one of my favorites because I see much of myself in him and his life.  The Curator is always rooting for the underdog, and Rousseau is the epitome of an underdog.  He had always desperately wanted a career in art but, lacking the financial advantages that would allow him to pursue it full-time, he held various administrative jobs that stifled him, a story the Curator knows all too well.  When biographer Cornelia Stabenow1 writes, "The only escape route lay in art...in spite of the continual risk of mockery, he exploited every opportunity to rise out of anonymity," she may as well be describing me - just change "he" to "she" and it's dead on.   Anyway, Rousseau persevered even though his work was often made fun of by critics, who regarded him as having no more artistic skill than a child - his work "caused many viewers to laugh till they cried."2

But he kept painting and painting, and towards the end of his life he began receiving serious critical recognition for his work, and now his paintings hang in the likes of MoMA and the National Gallery of Art.  Needless to say I find great inspiration in him.  He was the little  toll collector that could, and I'm the little museum that could.  It might take me till I'm 80 - it truly is a jungle out there - but someday I will have a real Makeup Museum!  (Oh, and get that Ph.D. I've been hankering after since I was 8.)

Through New Curator I have just been alerted to the fact that it is International Museum Day, according to the International Council of Museums.   Here's to all the established, traditional museums (think the Met and Louvre) and of course to the smaller, kookier ones like the Makeup Museum and others.  If there is an entire museum devoted to clocks and watches, surely there's room for a beauty museum!

The makeup artistic director for Givenchy, Nicolas Degennes, created an India-inspired theme for the line's spring/summer 2009 collection.  While at first I thought the colors didn't have much to do with India, an interview with Degennes for Vanity Fair explained his thoughtful construction of the collection.   "The must-have products re-interpret the radiance of Indian saris, with Precious Sari Glitter Eyeshadow and Sari Glow Iridescent Blush, while Magic Kajal Eye Pencil Intense Look beautifies the eyes with a stroke of bewitching black. Adorned with bindis, the cases take refinement to the extreme, featuring mirrors and applicators that evoke the opulent decorative style of India...The Bollywood vision of the sari, embroidered with mirrors and gold, evolved into Precious Sari Glitter Eyeshadows in Maharani Silver and Maharani Gold. The refined architecture and colors of Jaipur Palace were my inspiration for Sari Glow luminous cheek powder. Orange for the earth, omnipresent in all its shades and variations, is captured in Maharani Orange. For a touch of sweetness and demure femininity, there is Maharani Pink. Earth and henna are so much a part of India, and inspired Rouge Interdit Lip Colors in Maharani Rose and Maharani Henna."  Judging from this interview, there seems to have been a lot of consideration going into the collection in terms of color selection, which makes the Curator happy.  But what about the packaging?

Compared to the elephant-embossed compact Lancôme released last fall for their Indian-themed collection, Givenchy's packaging is definitely more subtle, with a delicate pattern adorning the edges of each product.  I liked that you can tell it's India-inspired without it hitting you over the head.  Another thumbs-up for the latest creation from Degennes!

Posted at 08:18 AM in Couture/Fashion, Givenchy | Permalink | 0 comments 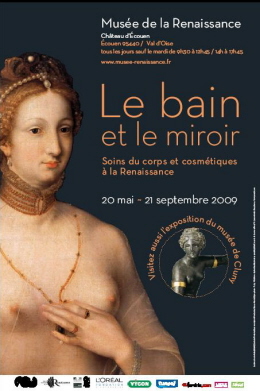 It just goes to show I'm not totally crazy - here is a bona fide exhibition about beauty and cosmetics!  Via Art History Newsletter, I learned that the Musée National de la Renaissance in Ecouen, France, presents Le Bain et le Miroir:  Soins du corps et cosmétiques à la Renaissance.  Alas, I cannot understand French and the website doesn't have an English option, but I'm pretty sure it has something to do with beauty and cosmetics.  From what I can gather (did you know Google has a translation function?), included are combs, perfumes, mirrors and I believe even some makeup.  There are also paintings and sculptures depicting ideal Renaissance beauty to put these objects in context.  The exhibition is in conjunction with another exhibit focusing on beauty in from antiquity to the Middle Ages at the Cluny Museum.  What's really amazing about that one is that L'Oreal analyzed the cosmetics to understand their composition.  How cool would it be to research what people used back then for makeup?
L'Oreal is also partially funding the exhibition..I'm thinking I should get in touch with them to see if they want to have a contemporary beauty exhibit stateside.  :)

Posted at 09:15 AM in Cosmetics history, Exhibitions and museums | Permalink | 0 comments

A whale of a palette: Chantecaille's Baleine collection

For spring Chantecaille released these lovely palettes.  Five percent of sales will go to the International Union for Conservation of Nature to help save the whales.  I think what I like most about these isn't the abstract waves formed by undulating lines, it's the little baby whale swimming below the larger one. 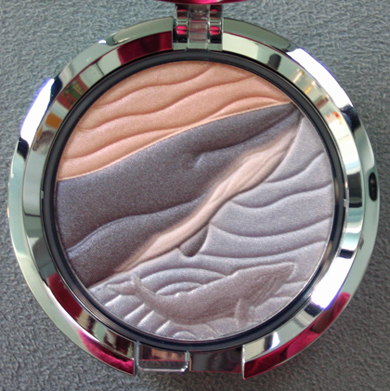 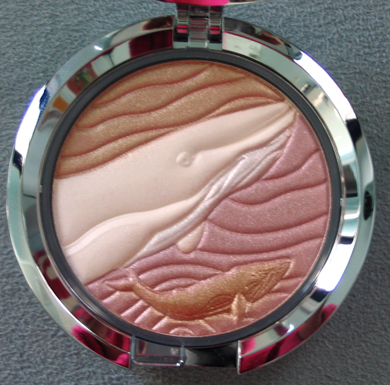 I'm happy Chantecaille is continuing its trend of putting out palettes with endangered species - it's another way the cosmetic industry can do some good.  If only the packaging itself were eco-friendly.  Sylvie better get on that.  ;)

Hooray, I'm officially a card-carrying member of the American Association of Museums!  In my excitement I forgot to sign the card.  :P 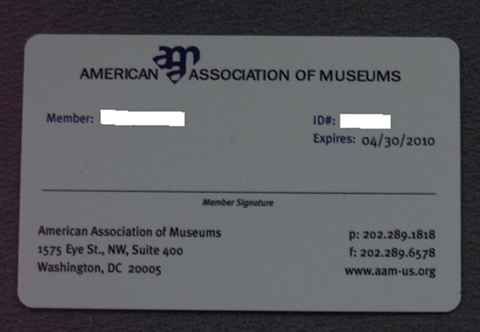 Now I can buy some books on how to start your own museum at the discounted member rate.  If I actually can make the museum into a legal entity, I'll be switching my individual membership for an institutional one.  :)

Posted at 05:48 AM in Miscellaneous | Permalink | 0 comments