Going out with a bang...

...well, not quite.  As 2008 comes to a close, so does the Museum. This blog is on hiatus, at least temporarily.  Maybe in 2009 I'll actually feel like posting and it won't be a chore, but for right now I have no interest in continuing this.  Thanks to anyone who read.

Posted at 08:58 AM in Miscellaneous | Permalink | 0 comments

Time for a good old-fashioned palette smackdown!  Two makeup companies are duking it out to see who can come up with the best use of crystals on their holiday offerings.

LET'S GET READY TO RUMBBBBLLLLE!!

In the right corner we have Armani's crystal palette, featuring a single vertical line of Swarovski crystals: 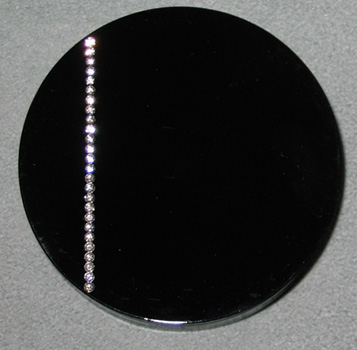 And the interior of the palette: 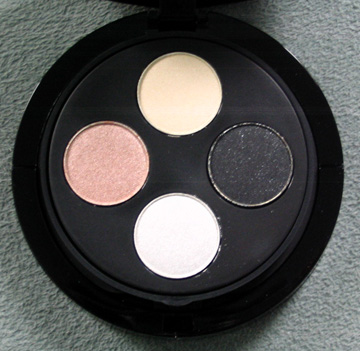 In the other corner we have Dior's Night Diamond powder, which has much bigger crystals, but that cannot boast the Swarovski name: 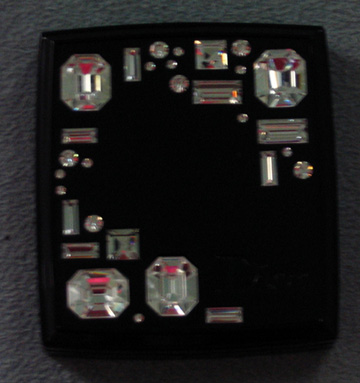 So who do you think did crystals better?  Will Armani's simple, understated design beat out the flashier use of faux gems by Dior?  Or will Dior's more geometric pattern, ingeniously borrowed from a pair of the company's sunglasses, crush his competitor?   You can determine the winner - cast your vote in the comments section!

Posted at 07:29 AM in Armani, Couture/Fashion, Dior, Smackdowns | Permalink | 0 comments

Launched in 2004 by Gabriela Hernandez, the packaging of Bésame cosmetics channels the glamour and femininity not often found in most contemporary makeup lines.  I was always drawn to the intricate designs as well as the gold metal casing, but when I actually visited the site I was thrilled to see a wealth of information on the packaging - the inspiration, the concept, and the execution.  The company appears to care greatly about how their line is presented and what message they want to communicate via the packaging.

The packaging is meant to be a replica of original Art Deco cosmetic packaging - the company actually makes its own lipstick molds to create close copies of products from an earlier time.   According to the Bésame website, "[there] was a time when the aesthetic beauty of a compact was just as important as designer jewelry worn for a night on the town. The cosmetic products of the day mirrored this aesthetic and were designed to be functional yet glamorous, romantic and feminine...Thoughtfully created with detail and care, every piece is meticulously finished to provide the wearer with the experience of true glamour."   I'm not sure how I feel about this.  On the one hand I think it's great that the company went to great lengths to recreate early cosmetic packaging.  It makes applying makeup much more special when the product comes from a luxe, custom-made tube that isn't usually found in today's market.  On the other it almost seems as though the company doesn't recognize that contemporary makeup packaging can be just as luxurious and special as that from an earlier era.  Says Hernandez, “The formality of yesteryear no longer exists. I miss the attention to details seen in the past. In creating Bésame, I sought to recapture the sophistication of being a woman that seems to be lost today.”  I can't say I agree with her - are contemporary women somehow not as sophisticated because there is a lack of retro packaging?  As for attention to detail, I think the Makeup Museum, which celebrates the beauty in cosmetics packaging, shows that cosmetic companies pay close attention to the details in their products' design.  And I think there is still a great deal of formality and luxury in makeup packaging, especially in some of the high-end lines.  Examples of modern but still incredibly glamourous packaging abound, like Chanel's Rouge Allure lipsticks (there is simply nothing more satisfying than hearing the small click the bullet makes when it's removed from the sleek black case) or Yves Saint Laurent's Rouge Volupte gold-and-logo embossed lipsticks.

Overall though, I'm impressed with the research and effort that went into Bésame products.  While I might not agree completely with the CEO's perspective, it's definitely a strong one that fueled the creation of a unique line that allows consumers to experience authentic vintage packaging (without having to actually use decades-old cosmetics!)

Posted at 01:26 PM in Other makeup brands, Vintage | Permalink | 0 comments

It's that time of year and the Curator has just finished the holiday installation at the physical Makeup Museum (a.k.a. the apartment.)  Here is the main exhibition: 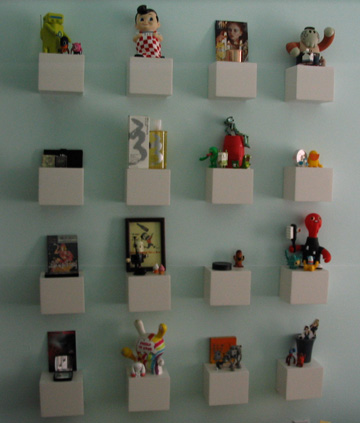 Close-ups of some of the shelves: 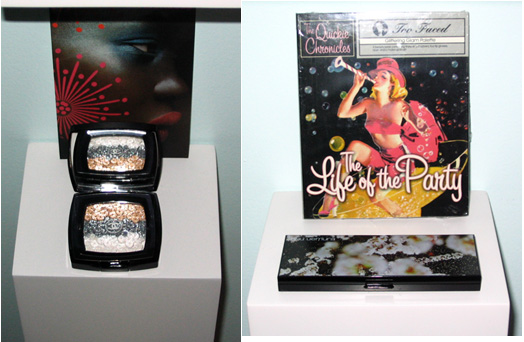 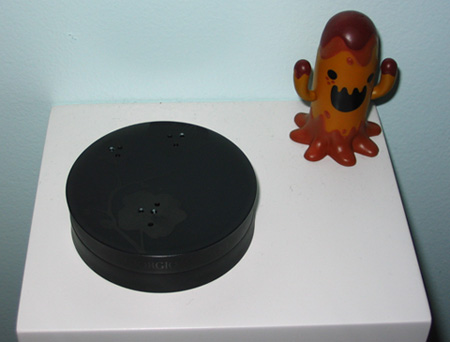 Stila girls all decked out for holiday parties, hanging out with some more friends: 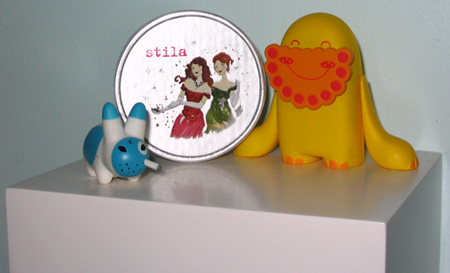 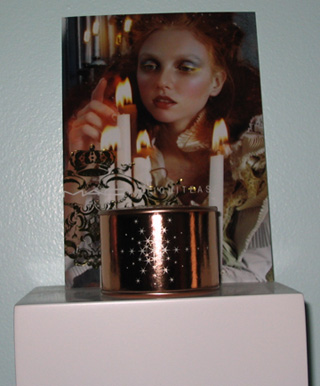 Auxillary exhibition in the office: 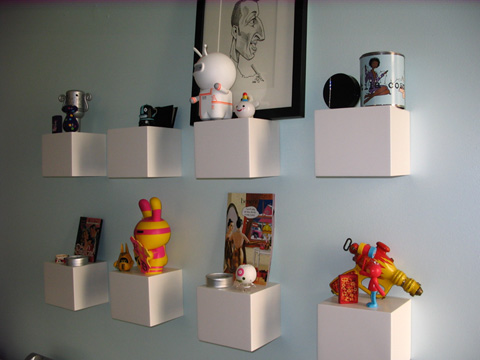 Armani's latest palette with a holiday Stila can: 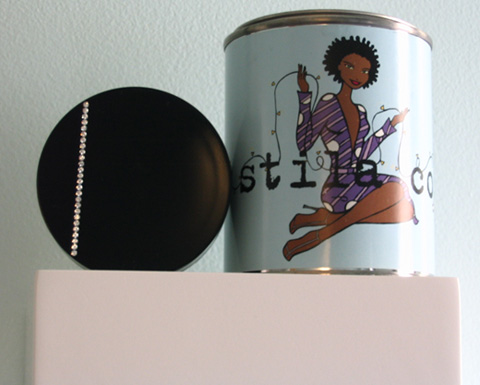 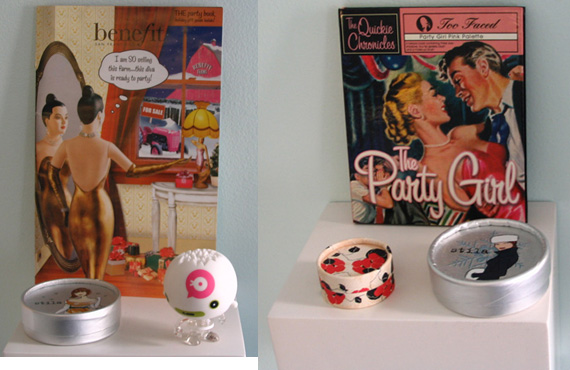 I didn't do a second auxillary exhibition in the hallway as I did for the fall installation - still need more holiday/wintery-looking items to do that!   But I do think that what I've done is undeniably festive.  :)

Posted at 01:02 PM in Exhibitions and museums | Permalink | 0 comments 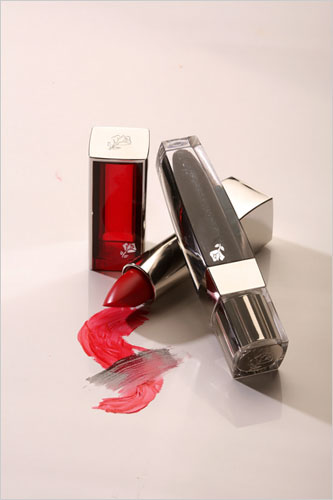 Named after the "black sand beach where Aaron grew up in New Zealand," the Piha set would be released in November, appearing only at the 59th street location of Bloomingdales in NYC and several Lancôme boutiques with 500 sets made available.  An additional 100 sets would be sold online at the Lancôme website.   (I must note that I've been stalking the Lancôme site since November 1 and have yet to see them, and e-mailed customer service and was told they had no idea when the sets would arrive.)  In any case, the idea behind the set is genius - a combination of the latest cosmetics trend (dark lips) and a lipstick that resembles the iconic creation (red soles) of Louboutin.   But perhaps I'm also taken with the set because it brings together my two biggest weaknesses:  makeup and shoes.

Now for the fun part!  Although I was unable to procure a Piha set for myself to compare the lipstick to Louboutin soles (I am the proud owner of the ones shown below), I can still determine if the lipstick is a good match based on online photos, like the one above from the New York Times. 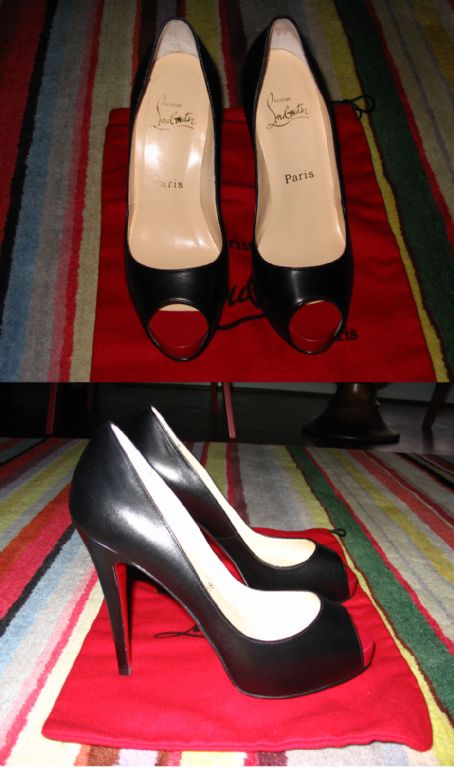 Judging from these two pictures, the lipstick looks pretty accurate!

Posted at 11:06 AM in Couture/Fashion, Lancôme | Permalink | 0 comments

Move over, Cargo PlantLove!  Urban Decay's newest palette, the Sustainable Shadow Box, contains ten eyeshadows that sit in recycled paper and a cruelty-free brush to apply them, while the cover is made out of eco-friendly bamboo.  I think the use of this material is pretty ingenious.  I've seen clothing made out of bamboo before, but not cosmetics.  According to Cosmetics and Personal Care Packaging, the palette is the first in the industry to make use of bamboo. 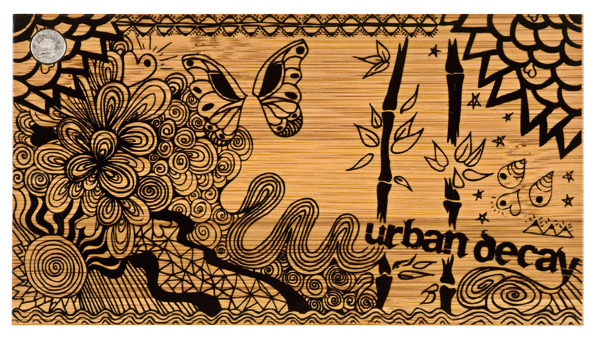 Urban Decay says the designs on the palette's cover are supposed to be "reminiscent of your high school notebook".  But a not-so-environmentally friendly silk-screen and lacquering process was used for the designs.  "'We tried to use greener decorating options, but unfortunately, they didn't work very well,' says Nick Gardner, vice president of sales, HCT Packaging USA (Los Angeles). The decision was made to with the best option that looked best, aesthetically." Thus it seems that there still lies a conflict between green packaging and aesthetics - the technology hasn't come quite full circle yet in terms of hip, modern design.  (The use of corn-based plastic - the kind used to package Cargo's PlantLove line -  may have offered more eco-friendly design options, but still required the use of oil in its manufacturing.)   While Urban Decay acknowledges the palette isn't as green as it possibly could be, I think that the company, along with Cargo, has done an excellent job in leading the way towards greener packaging without sacrificing design.  I'm hoping more cosmetics companies follow their lead.  They strive to stay on top of the latest trends in product ingredients or even products in general (case in point:  nearly all makeup lines now have at least one or two mineral makeup items in their lineup after Bare Escentuals products became best-sellers) so they should compete to see who can come up with the greenest, chicest packaging.

It took me a while to get out of my turkey-induced coma, hence my hiatus from the Museum.  But my long-awaited Chantecaille Tiger powders have arrived!!  The embossing is really stunning.  (I have not been able to procure the Bengal palette due to lack of funds, but I'm hoping Santa will provide the final piece in this collection for the Museum.  ;))

White Tiger, with flash and in natural light:

While I think the design is nice, it may have been interesting to see the entire tiger on the powder, the way Lancôme did with their Elephant bronzing powder earlier this year.  Instead of a face product there could have been an eye shadow - a tiger's black stripes would make a good liner, and the rest of the body could be a shadow or bronzer.   I guess overall I wanted to the tiger to appear more ferocious, the way it looks in its natural habitat.  The more I look at these powders the more I think they look almost like a nice little portrait of a tiger rather than capturing the beauty of the animal itself in all its wild glory.   But maybe I've been thinking too much of the work by famed 19th-century animalier Antoine-Louis Barye (1796-1875): 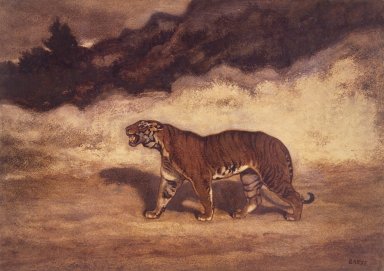 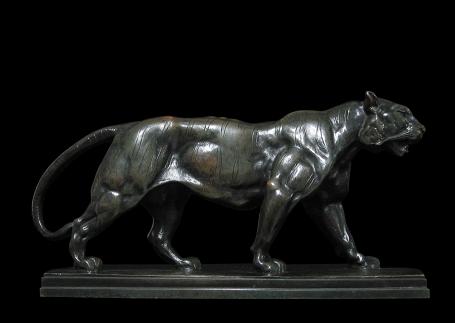 Tiger Walking, cast after an original, photo from artwansongallery.com

Barye was an established animal sculptor who spent much of his time at the zoo in Paris, and he was able to beautifully capture the movement and power of tigers after a Bengal tiger arrived at the zoo in 1830.1  I think something closer to his work would have made a better palette than  a simple "head shot" of a tiger.  Still, these are quite lovely and will make for an excellent exhibtion.

1 For more on Barye, check out the exhibition catalogue "Untamed: The Art of Antoine-Louis Barye", available at the Walters Art Museum (which, incidentally, has the largest Barye collection in the world - if you're ever in Baltimore I urge you to check it out!)

Posted at 09:46 AM in Art history, Chantecaille | Permalink | 0 comments