It's not even winter here yet but today is very cold and dreary, so I thought I'd take a look back at a nice cheery spring collection.  In May of 2007 Guerlain teamed up with Pucci to create a limited edition collection that included lip glosses, powder brush, and eye makeup set along with Guerlain's best-selling Meteorites (for those of you not familiar with this product, it's a face highlighter in the shape of little balls).  The Museum's Advisory Committee voted against buying the entire collection, using the argument that the print was more or less the same on all the items, but unanimously agreed to procuring, at a minimum, the Meteorites.

And the rest of the collection: 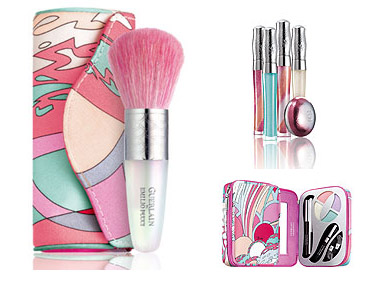 (photos from neimanmarcus.com)
What impressed me with this collection is the fact that Pucci created an entirely new print just for Guerlain instead of slapping on a design that was used on a previous collection.  According to Fashion Week Daily, the print was first placed on a scarf: "Olivier Échaudemaison, Guerlain's creative director, worked directly with Pucci's image director, Laudomia Pucci to translate the imagery of the scarf into an eight-piece makeup collection...'It's not just about wrapping something in a Pucci print,' said Pucci. 'Our first step was making a scarf, something that would give focus to the entire project. I can't visualize anything without a scarf!'"   The use of color is excellent too - soft aquamarine with pink and fuchsia is perfect for spring.  What's more, the colors and prints echoed, rather than exactly reproduced, the runway looks for Pucci's spring 2007 ready-to-wear line. 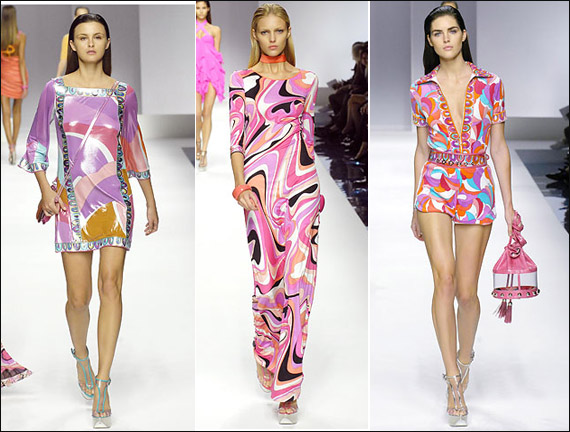 (photos from style.com)
All in all I think this was a very successful collection in terms of how the makeup truly captured the designer's aesthetic.  I like that a new print was created just for the collection, but not one that had little to do with Pucci's designs.  I'd be curious to see what Pucci could do for other makeup lines!

Posted at 08:59 AM in Couture/Fashion, Guerlain | Permalink | 0 comments