It seems a lot of the big fashion houses like to break out the animal prints for fall - not just for fashion but for the makeup lines too (see my previous posts on Armani's python palette and YSL Fauve).  This season Dior also took a walk on the wild side with their croc-patterned eye shadow palette, part of their Dandy Lady collection. 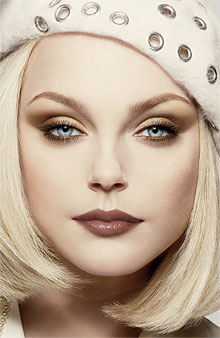 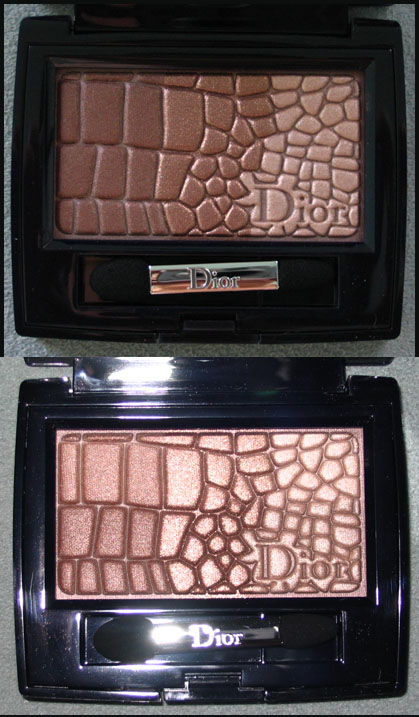 This is only the second time Dior has had an actual pattern in one of their items, the first one being the spring 2008 Flower Blossom palette.  Previously there was the occasional embossing of their name or some slight quilting, but for the most part Dior never did anything elaborate.  It's the first time (at least, that the Curator can remember) that the company had a real concept behind their seasonal makeup collection.  So what is Dandy Lady?  Unfortunately Dior's U.S. website turned up nothing - as of today the summer collection was still up.  But Nordstrom did have a brief explanation.  "Dandy is more than a look; it's a state of mind, inspired by the chic, independent spirit of the 1930s. Unexpectedly glamorous in contrasts of rich feminine plums, berries and the 'masculine' chic of warm, deep beige shades."  The palette is then described as a "a trio of ultra-trendy, boyishly-brown pearl-powder eyeshadows artfully stamped in this season's wildly popular 'croc' pattern. Another Dior innovation: the luminous 'base color' is slightly raised in the pan to indicate its 'primal' importance in any look from soft and natural to all out 'Dandy'", and finally:  "Croc rocks at Dior this season. It's a dandy."
I'm not really sure I follow the description (how does brown crocodile-printed shadow translate to 1930s androgynous chic?) but kudos to Dior for at least attemping to craft a story and a particular look for the collection.  It's a bit puzzling especially given that Dior's fall 2008 fashions had either a '50s feelor an early '60s vibe, so to delve into a completely different time period for the makeup is an odd choice on the part of Dior's cosmetics division - as we saw with Armani, there's a bit of a disconnect between the fashion and the makeup.  Sigh.  Still, the collection does make some sense if we look at Dior's overall vision - he was quite influenced by the concept of the male dandy, and carried certain elements of this style into his creations for women.
For a more in-depth, artistic description of the collection, check out this post- I'm not sure if the blog author wrote it or if it was pulled from a Dior press release, but it's interesting.